Barcelona’s reaction to their Champions League defeat to Liverpool has been remarkable.

The La Liga champions, having already signed Frenkie de Jong, have aggressively pursued Matthijs de Ligt, are favourites to land Antoine Griezmann and, according to reports in Brazil, are working on a package to bring Neymar back to the Camp Nou.

If all three potential signings become reality, Barcelona will have had a transfer window usually seen in Football Manager or FIFA. These arrivals, however, would ultimately result in something of an exodus.

Philippe Coutinho has been linked with a move to Paris Saint-Germain, Chelsea, Manchester United and a return to Liverpool. Samuel Umtiti is an Arsenal transfer target. Spurs are believed to be keen on Malcom while Inter reportedly want Ivan Rakitić.

However, the most exciting talent potentially up for grabs is Ousmane Dembélé.

TeamTalk claim Barca are open to selling the World Cup winner to Liverpool for a fee of around £90million. The Reds have long held an interest in the maverick wide forward, with Jürgen Klopp trying to add him to his ranks during his first summer on Merseyside.

The former Rennes youngster opted to continue his development at the Westfalenstadion instead of Anfield. Liverpool reacted to missing out on Dembélé by signing Sadio Mané, so it wasn’t all bad.

The 22-year-old, however, finds himself at an important career crossroads. His next move will be vital. Get it wrong and he risks becoming yet another failed wonderkid who didn't truly live up to their potential. Get it right and he could be rivalling Kylian Mbappé for the Ballon d’Or over the next decade.

Many clubs across Europe could claim to be the perfect place for Dembélé to mature into the player fans believe he can be. But few have a claim as strong as Liverpool’s.

Under the tutelage of Klopp, a number of players have taken their game to new levels. Players who didn’t possess the ex-BVB man’s raw talent.

It was under the German tactician that Mohamed Salah and Mané turned into Golden Boot winners. Virgil van Dijk is now unquestionably the best defender in the world. Roberto Firmino matured from a false-nine into the quintessential modern-day nine. And Liverpool went from five-time champions of Europe to six-time winners.

If reports are to be believed, the Reds are in the market for a versatile forward. You don’t get much more versatile than Dembélé. If the Frenchman did decide to make Merseyside his home, Klopp would have a lot to work with. 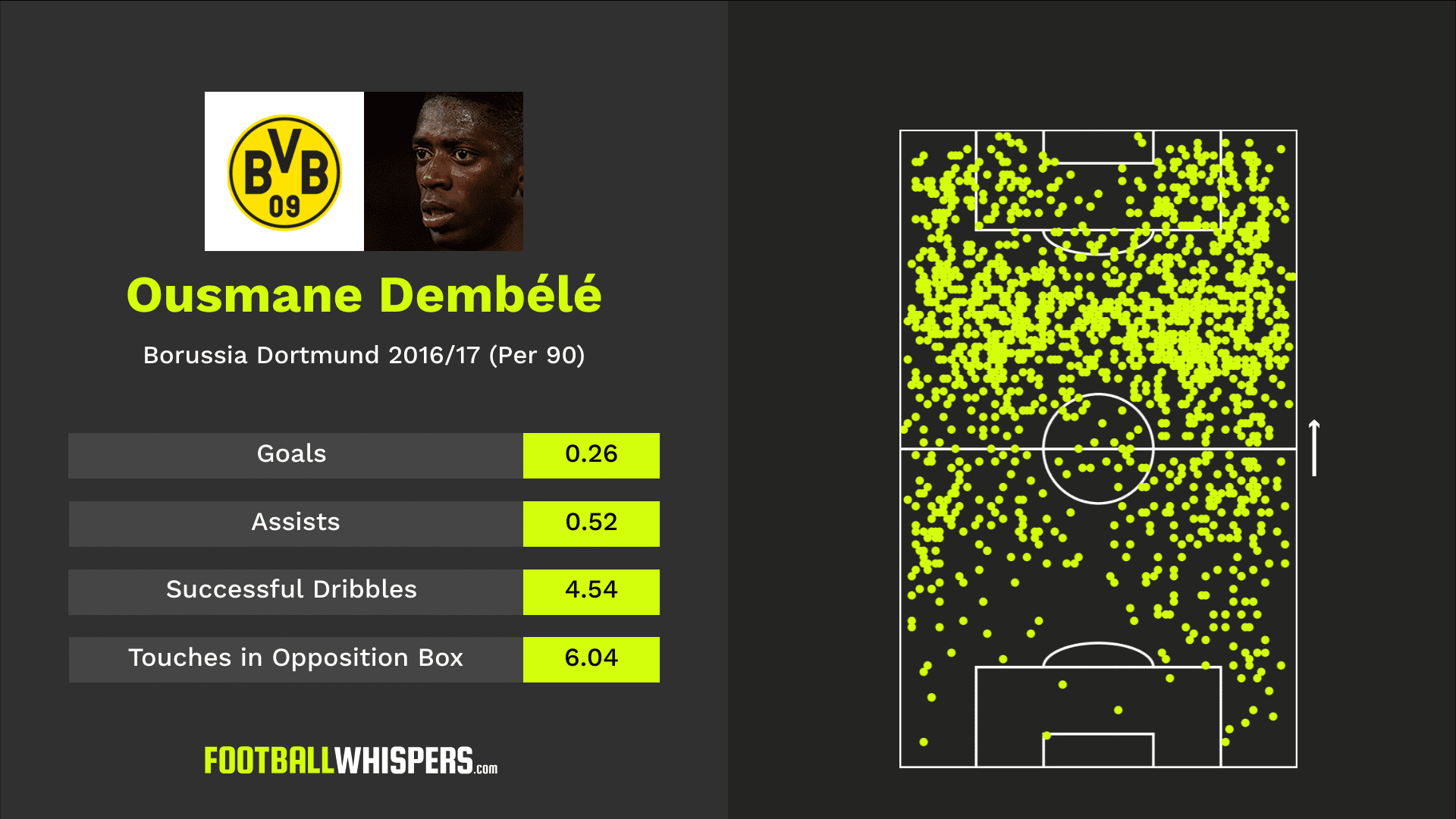 During his single campaign with Dortmund, the French youngster made quite the impression. He was utilised on both flanks, as evidenced by his touch map, and he was comfortable cutting inside to influence play. He wasn't averse to beating his man on the outside either but given he's perhaps the most two-footed player in football it's understandable.

He finished his debut campaign in the Bundesliga with an average of 0.26 goals and 0.52 assists per 90. His 4.54 completed dribbles meant he was peerless in that category and he was regularly touching the ball in the penalty area, a sign of a sustainable goal threat.

He's been a reliable nuisance for Barça since the move to Spain, though it is worth keeping in mind his time in La Liga has been stop-start due to injuries.

For context, his single season in Germany saw him play in 2,040 minutes in the Bundesliga. Since moving to the five-time champions of Europe, he's appeared in 2,601 minutes in the Spanish top flight. 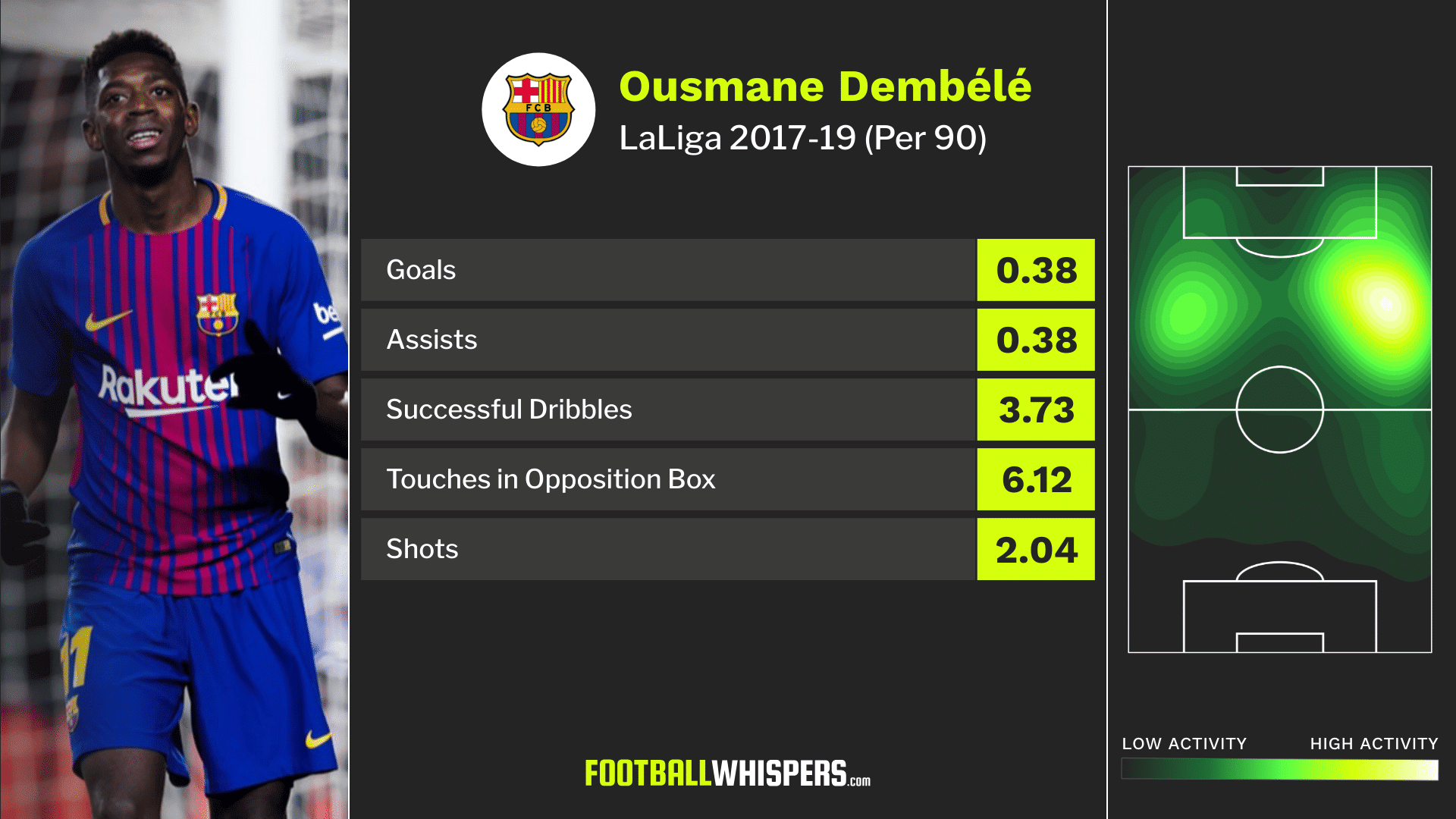 Yet despite the setbacks, he's always managed to be a threat when given the opportunity. He's averaged 0.38 goals and 0.38 assists over a two-season period while ensuring he still has at least six touches in the area. Successful dribbles have dropped off but that comes with the territory of playing for a more dominant side.

Now, in a sense, he doesn't fit the forward line at Anfield as Klopp wants goalscorers in those three positions. The expected goals average for Firmino, Salah and Mané all exceed their expected assist average. But that is by design and there's no reason to think Dembélé could adopt a similar mentality if he was to become a Liverpool player.

All it takes is a subtle tweak to his game, a shot instead of a pass, and the averages would be reversed. It's worth noting his post-shot expected goals average always surpasses his expected goals numbers, showing he adds values to his efforts with his placement.

The fact he's consistently averaged more touches in the area than Mané has over the past three seasons shows how much of a threat the Frenchman could be if utilised in the right sort of system.

He's got everything needed to excel as a Liverpool forward. He's a reliable goal threat across the forward line. His versatility means Salah and Mané can lead the attack from time to time if Firmino is in need of a rest without the wide areas losing any blistering pace.

Dembélé could be a difference-maker for the Reds. If they could strike a deal with Barcelona, perhaps writing off some of the money owed for Coutinho, then he could be the signing of the summer.