Otoho d'Oyo hosts TP Mazembe for the return leg of the Group c clash for the CAF Confederation Cup 2022. Otoho d'Oyo looks forward to revenge the 1-0 loss it suffered when they crossed the border to TPMazembe’s home ground. Read our tips below to get an idea of what lies ahead in the upcoming clash.

Our best picks for Otoho d'Oyo vs TP Mazembe Prediction

Both teams come to the Sunday clash at the backdrop of four undefeated attempts from their previous five matches. Will Otoho rely on its fine home form to get the job done?

Otoho drew all its five previous home matches across all competitions bar one. This exception came against Al Masry – which is the Group C leader. Otoho won the match on a 1-0 scoreline. TP Mazembe drew all their previous away matches in CAF Conference Cup bar one. The visitors recorded one loss in their recent five matches – against Al Masry. Expect a nutcracker that ends in a draw because it will be instrumental in determining the team that qualifies to the next stage of the competition.

Otohod'Oyo lines up its arsenals to face TP Mazembe for the second time this year in a must-win encounter. Suppose Otohod'Oyo loses this clash, its chances of qualifying from the group will reduce. Here are our key telling points for each team:

CAF Confederation Cup has not been particularly favorable for Otoho this season. The hosts sit in the third spot – where the first two teams proceed to the next phase of the tournament. Otoho’s main undoing this season has been a poor away record, where it is searching for a first win. We are tipping the hosts to repeat the 27th February trick against Al Masry to get a favorable result this Sunday. We hope Chabani will take advantage of a fully fit squad to select the best combination to get the better of TPMazambe.

TPMazambe has of late recorded fantastic results in all competitions – suffering defeat once. It sits second in Group C, with goal difference the only barrier with first place. It took Mondeko five minutes after regulation time to cancel off the own goal by Masengo to earn the visitors a single important point that has kept them in position. TP Mazambe’s main challenge this season has been how to claim three points on the road in CAF Confederation Cup encounters. It failed to win its recent five away matches in the competition. 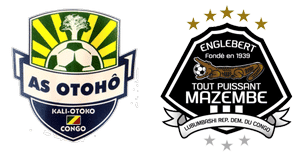 Who won the recent match between Otoho d'Oyo and TP Mazembe?

TPMazembe won the reverse fixture with a 1-0 scoreline.

Where will the upcoming match between Otoho d'Oyo and TP Mazembe be played?

What is the kick-off for the upcoming match between Otoho d'Oyo and TP Mazembe?