The first match of the Saturday's La Liga programme is the Osasuna vs Rayo Vallecano duel. This could be a tough match to predict, so we have prepared a preview and free betting tips to help you out.

Our top Osasuna vs Rayo Vallecano betting tips and picks

If you are unsure what is the best bet for Osasuna vs Rayo Vallecano, check our favourite predictions for this match:

While both teams have been doing well so far, the more impressive results belong to Rayo Vallecano who is currently sitting in the fifth place in the standings despite being a newly-promoted team. Of course, it's still early in the season and we expect Rayo Vallecano to slow down. In fact, we expect that to happen against Osasuna already, so our prediction for this match is for Osasuna to win.

Both Osasuna and Rayo Vallecano are at the very top of league when it comes to the number of goals since Osasuna averaged 3.00 goals per game so far, while Rayo Vallecano averaged 2.86 goals in the league this season. In addition to this, two of their last three meetings have gone over 2.5 total goals, so we expect the same thing to happen in their upcoming duel.

Top odds and useful stats for Osasuna vs Rayo Vallecano

If you are looking for the top Osasuna vs Rayo Vallecano odds, check our list of odds from the best UK bookies right here:

Osasuna started the new season with three wins, two draws, and two losses, which is enough to put them in the ninth spot in the standings. The fans will probably hope for the team to stay in the top half of the table this season, but that may be too much to ask of Osasuna. In any case, the team is doing well at the moment. Areso, Barja, and Hernandez are injured and they will miss the next match in La Liga.

With four wins, one draw, and two losses in the first seven matches of the season, Rayo Vallecano surprised everyone and probably even their most optimistic fans. So, the team is clearly doing great and they are sitting in the fifth spot in the standings at the moment, far away from the relegation zone where many expected them to be. Merquelanz and Saveljich are on the club's injury list right now. 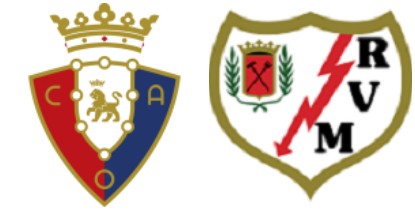