One of the closest duels in the upcoming La Liga round is the Elche vs Osasuna matchup. If you want to learn more about this game, check our free betting tips and our preview of the match.

If you are not sure what is the right bet for the Elche vs Osasuna duel, check our top betting tips for this game:

Elche and Osasuna to Draw

Both teams are have done pretty much the same lately in La Liga and the difference between them in the standings is just five points, with Osasuna being ahead.

So, with that in mind, we feel that a draw in this game is probably the most reasonable outcome. After all, these two teams drew in three of their last five h2h meetings.

Both teams have scored in four of the last five head-to-head duels between Elche and Osasuna, so we would be surprised if that didn't happen again on Sunday.

That being said, both teams scored in just 39% of all Osasuna matches in the league this season, while the same is true for 55% of all Elche games in La Liga so far.

The best odds and important stats for Elche vs Osasuna

If you want to bet on the highest Alaves vs Villarreal odds, check our selection of odds taken from the best UK bookies:

This is a very close and unpredictable matchup, so let's check both teams out in more detail ahead of their meeting:

With three wins and three losses in the last six games, Elche has been a bit inconsistent lately, although that record is not a bad for a team of their caliber. After all, Elche is currently eight points ahead of the first team in the relegation zone and they are pretty much safe from it, unless things go terribly wrong for them in the last five rounds.

Meanwhile, the team will be without Gonzalo Verdu, Lucas Boye, and Johan Mojica, who are all injured. On the bright side, Omar Mascarell is back from serving a suspension.

Just like their upcoming opponent, Osasuna has three wins and three losses in the last six games in La Liga. The team is sitting in the ninth place in the standings, which is a pretty good result for them. However, they are too far away from Villarreal and a chance to earn a spot in European competitions next season.

When it comes to team news, Osasuna will likely remain without Jesus Areso and Juan Cruz due to injuries, but the rest of the team is in good shape ahead of this game.

The most frequent questions for Elche vs Osasuna 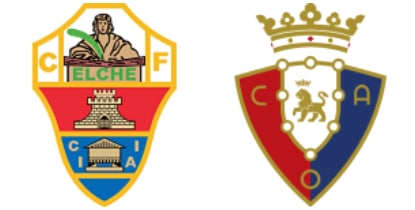