In an era of ‘number tens,’ ‘false number nines,’ ‘holding midfielders’ and ‘sweeper keepers’ there’s one type of player who is sadly becoming something of a dying breed in the modern game – the ‘one club man.’

The one club men are those loyal bastions who remain rooted to their first club, the team that gave them their big-break and stuck with them through thick and thin.

Money, the chance of silverware and personal interest are all major factors in players deciding where to play their football these days, but not for the one club man, he is happy to remain loyal to the cause and always willing to try and change things for the better rather than simply jump ship.

When it’s the norm for players to start looking for their next club as soon as the ink has dried on their latest multi-million pound contract in search of greater riches, better image rights and a bigger trophy collection, this team of stars each stayed true to what they knew with the dream of having all that and more.

So here is a team made entirely of men who spent their whole career playing for one British club and for that very reason, we salute them.

Crossing from Ireland to Glasgow, Pat “Packie” Bonner signed for Celtic in 1978 and was Jock Stein's last-ever recruit. Making 642 appearances for the club in total, he is the fifth highest capped player in Celtic history and the highest from outside Scotland. Bonner's dominance at Parkhead saw him win four Scottish League titles, three Scottish Cups and a Scottish League Cup before he retired in 1998, arguably regarded as the best Celtic goalkeeper of all time.

England’s most capped right-back was, and still is Manchester United through-and-through. As with Paul Scholes and Ryan Giggs, Neville has a huge collection of trophies as reward for his loyalty to the only club he ever played for, including eight premier league titles and two champion’s league winner’s medals.

During his playing career, Neville came to epitomise the spirit of United in the same way Jamie Carragher did for Liverpool, no surprise then that they later teamed up to form a highly successful punditry duo for Sky.

Having joined Liverpool as a nine-year-old in 1987, Jamie Carragher gave 26 years of loyal service and was never once tempted by offers to play elsewhere. His time at Anfield saw him lift the FA Cup, League Cup, UEFA Cup and of course the Champions League in Istanbul in 2005 after the most dramatic of comebacks in the final against AC Milan.

The versatile defender made over 700 appearances for the Reds and became a Kop legend – despite growing up as an Everton fan! 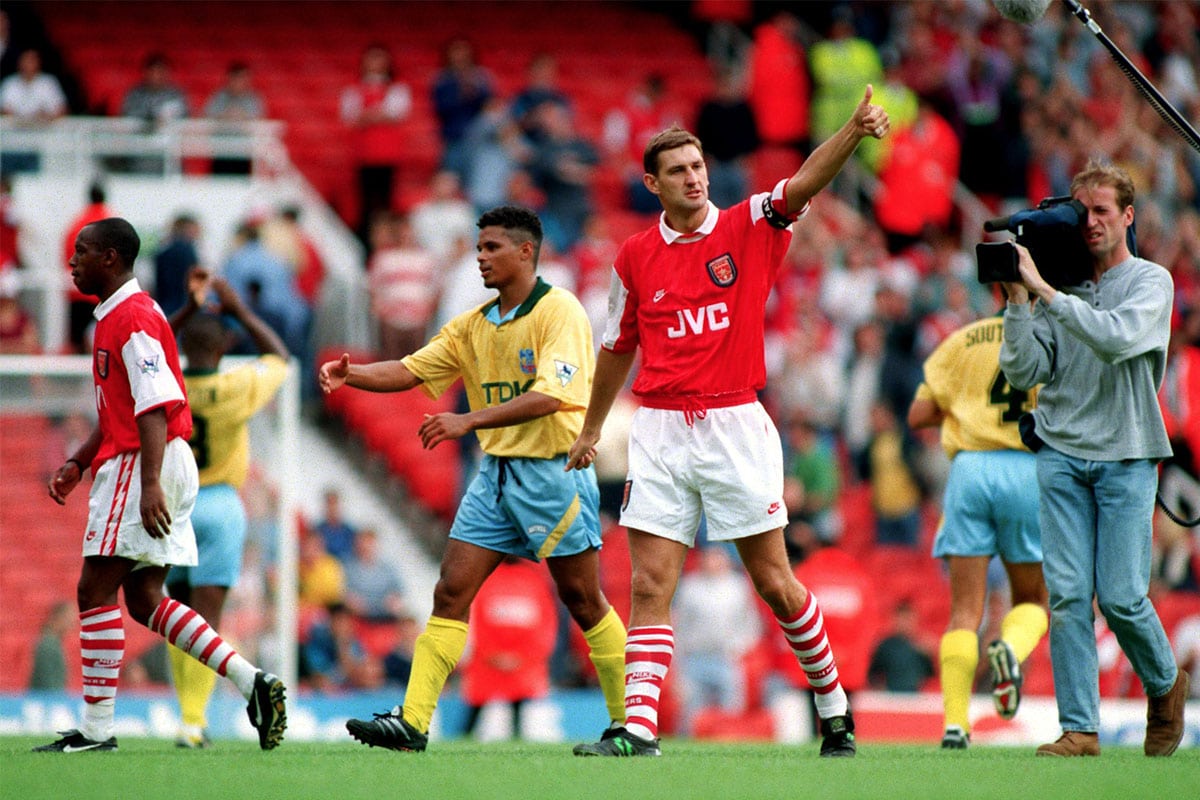 During his 19-year tenure in the heart of Arsenal's famous back four, Tony Adams was as solid as a rock thanks to the relationship he forged with Steve Bould, Lee Dixon and Nigel Winterburn who formed one of the leanest defences in the country and put the fear of God into an attack they came up against.

oneGeorge Graham appointed Adams captain at the age of 21 and the man that became known as ‘Mr Arsenal' won three league titles in three different decades and also played 669 games for the Gunners before hanging up his boots in 2002.

John Terry’s move to Aston Villa in the summer takes the Chelsea legend out of contention in what would have been a nailed on spot in this team.

Not to worry, we only have a World Cup winning defender to take his spot. Jack Charlton started in the Leeds United youth teams before going on to play over 620 times for the Yorkshire club. As old-fashioned, hard-hitting defender, he may have only won the league title and FA Cup once, but no one else in this team got their hands on international football’s greatest prize.

A quiet and modest figure, Paul Scholes is often identified by players past and present as one of the best central midfielders ever to grace the game. In his 17 year career, Scholes racked up 466 appearances and 102 goals for Manchester United, and did it all without seeking glory or fame.

He could pass and shoot as well as anyone else and had an awareness of his surroundings that ensured he was always in the right position and always made the right pass. Such was his loyalty, after retiring in 2011 he put on the boots once again the following year after his beloved club failed to find a suitable replacement and even helped them to win their 20th title in 2013. 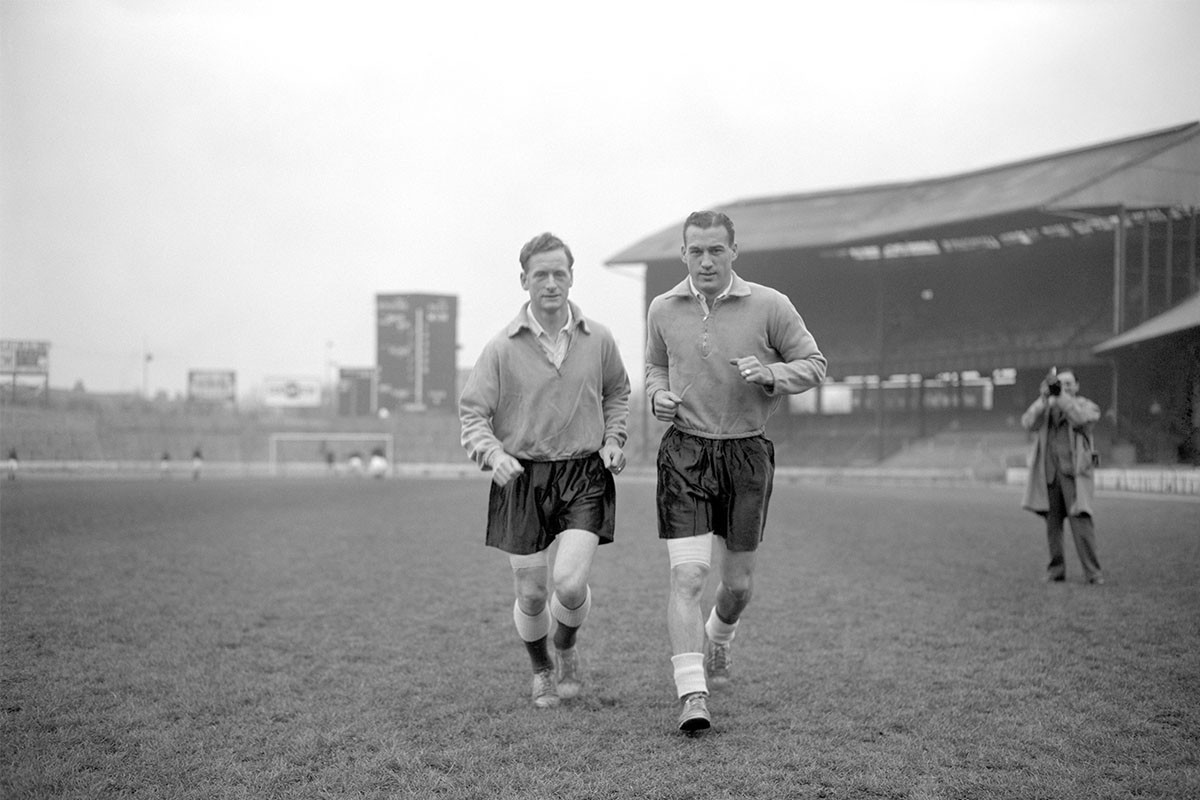 Tom Finney spent an incredible 20 years at Deepdale and played 569 first-class matches for North End. Known as the ‘Preston Plumber’ after his commitments to his family’s plumbing business, Finney showed loyalty to both his family and his main love of football. Sir Tom, as he would later become, scored a tremendous 210 goals for the Lilywhites and will forever be remembered at Preston, as well as England – for whom he scored 30 goals in 76 international matches. There is now a stand named after the legendary forward at Deepdale.

Known by Celtic fans as Maestro, Paul McStay is a legend at Parkhead and deserves a place on this team. As a 15-year-old he rose to fame after captaining Scotland to a 5-4 win over England. He scored twice and was named Man of the Match. Celtic signed up the Hamilton born midfielder when he turned 16 and he would go on to captain both club and country at every age level.

Playing 515 times over 16 seasons, he replaced Roy Aitken as the senior captain in 1990 after helping the Bhoys to three league titles in the 1980s and the rampaging box-to-box midfielder went on to win four Scottish Cups.

There’s a pub in Bolton called the ‘Lion of Vienna' in honour of Nat Lofthouse’s efforts for England against Austria in 1952 where he was knocked unconscious, injured his knee and still scored the winning goal in his country's 3-2 win. Lofthouse was a goal scoring machine for Wanderers finding the back of the net 285 times in 452 games between 1946 and 1960 while also helping the club to win their fourth FA Cup in 1958, scoring twice in the final against Manchester United.

An outstanding player capable of the spectacular while barely breaking sweat, Matt Le Tissier earned the nickname ‘Le God’ from Saints fans, not only for his spectacular goals, but also his incredible loyalty to his club. Despite being accused of having a lack of ambition Le Tissier turned down offers from bigger clubs to stay on the south coast for 16 years. In 1990, Tottenham tried to entice him away, and Chelsea did likewise in 1996, but Le Tissier wouldn’t budge and remained a Saint for life.

A man whose status as, not just a Manchester United legend but football icon, is secured for life. Ryan Giggs' spell at the club he supported from a boy stretches back over a quarter-of-a-century and pretty much verges on the ridiculous. Making his first appearance as a 17-year-old substitute against Everton in March 1991 Giggs would go on to win 13 Premier League titles, two Champions League crowns and four FA Cups together to name just a few.