November 2000, the world was a weird and wonderful place at the turn of the millennium. It had taken 11 months to get over the threat of Y2K and boybands were everywhere. It was a existence that saw a group called A1 top the charts over Westlife with this instantly forgettable classic.

On this day, 16 years ago, Leeds United made history when their £18 million bid for Rio Ferdinand was accepted by West Ham United. The deal wasn’t completed until the 25th, with the central defender paraded on the 26th as the Yorkshire club welcomed Arsenal to Elland Road, but that move on the 21st would change the landscape of English football. 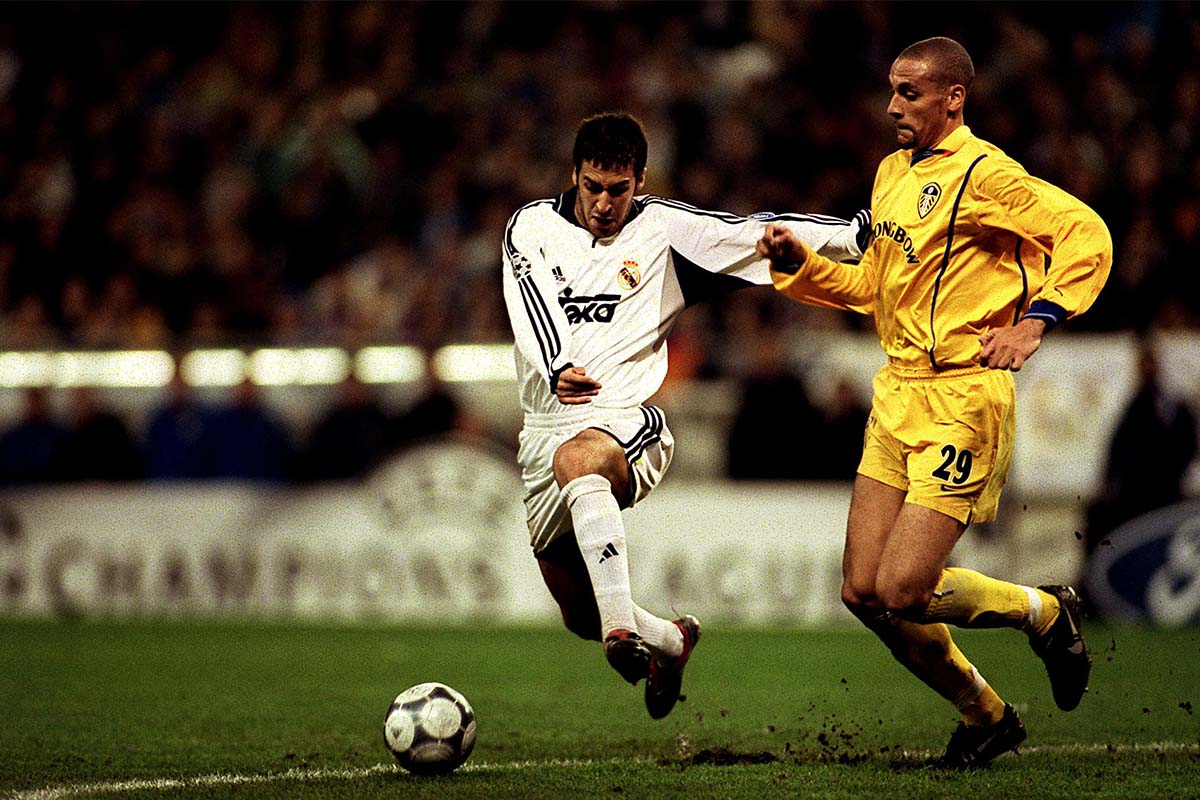 The transfer fee made Ferdinand the most expensive defender in the country: “Today is a very special day for Leeds United and a special day for English football,” Leeds chairman Peter Ridsdale announced to the world. ”We are often criticised for not supporting English talent in this country. Leeds have done more than most before today to support talent from England, British Isles and southern Ireland.”

At the time, it was a British record fee paid by a Premier League club, beating the £15 million that Newcastle United handed to Blackburn Rovers for Alan Shearer – that didn’t work out too bad.

Arsenal had received £22.5 million from Real Madrid for Nicolas Anelka, but it was huge for a club like Leeds to make that kind of move.

“It wasn't a big decision on the ambition front,” said Ferdinand at the time.  “West Ham gave me my chance in football and I owe them a lot. This is a new chapter in my career. European football is what I need and want.”

Usually, the massive fees and record breaking deals were reserved for forwards, Stan Collymore, Dennis Bergkamp and Andy Cole the players that held the transfer fee record before the young defender.

“We have had a bit of criticism for paying so much but we believe we have got a bargain,” continued Ridsdale. “The Premiership and Europe will take note that we are here to stay, here for titles and silverware.”

He may have got that second part wrong – R.I.P Leeds United in Europe – but it would turn out that the Elland Road club did indeed pick up a bargain.

Everyone was all smiles before the Arsenal game and that continued when Olivier Dacourt’s deflected free-kick proved to be enough for the 1-0 win.

Ferdinand made his debut at the start of December, and initially, it looked like Ridsdale had gotten things very very wrong. Playing against Leicester City at Filbert Street, the away side were 3-0 down after just 30 minutes. The home fans sang ‘what a waste of money’ and the Leeds United board must have been scrambling around looking for a receipt.

David O’Leary, smartly, didn’t throw his new signing under the boss, remarking that he was, “delighted with Rio, but he didn’t get a lot of help from those around him.”

The centre-back would make 54 appearances for Leeds United in two Premier League seasons. He scored a great back post header to trigger a 2-1 win at Anfield over Liverpool and added another against Deportivo La Coruna as he played a crucial part in the Yorkshire club reaching the semi-finals of the UEFA Champions League.

He would take over from Lucas Radebe as the club captain in 2001, but he couldn’t lead his team to a fourth-place finish at the end of the 2001/02 campaign. Leeds had set their business model up to expect money from Europe’s elite competition. Finishing five points behind Newcastle United spelled trouble.

After impressing at the 2002 FIFA World Cup in Korea/Japan, Ridsdale’s original quote would come true when Manchester United paid them £29.1 million for the international defender, which made him the most expensive British football in history. 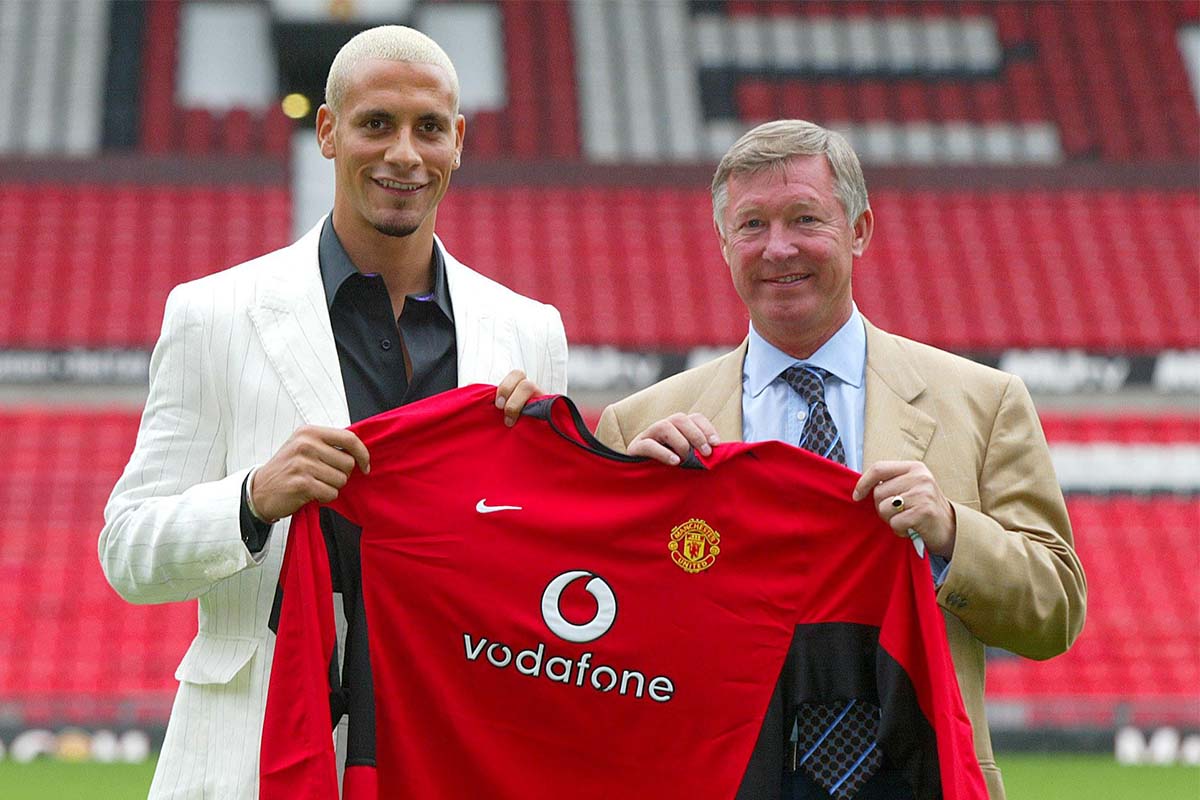 As crazy as modern football is, the deal still ranks as the 29th largest. John Stones’ move to Manchester City is 22nd, so that’s not bad for a defender 16 years on.

How do you quantify Ferdinand’s time at United? Outstanding is one word. Six Premier League titles, three League Cups and one Champions League. He played 312 league games and regardless of your team, or what you think of him as a person, he must go down as the greatest Premier League defender of all time.

Players like John Stones, someone who perfectly fits Pep Guardiola’s demands at City, wouldn’t exist in Britain without the path that Rio blazed for the young defender

“He's the best ball playing centre-half about at the moment,” Ferdinand said about the young defender when at Everton. “Give the kid a chance to play and to grow and to make mistakes.”

“When I came through, Harry Redknapp used to say to me, ‘make mistakes, don't worry – but don't make the same ones all the time.”

Just like Stones move to Manchester; it was Rio’s arrival at Old Trafford that took his game to another level. No matter what he achieved at Leeds United, linking up with Sir Alex Ferguson was the moment that made Rio’s career.

As soon as he walked through the gates, the Scotsman was on his back, labelling him a ‘big, casual sod’. “I can’t help it, the defender replied. “You’ll need to help it, because it’ll cost you goals, and I’ll be on your back.”

His partnership with Nemanja Vidic was perfect. The Serbian was the tough-man, but Ferdinand was as physically impressive, sometimes overlooked. Great on the ball, quick along the ground. Just when strikers thought they were in on goal, Rio would storm back and nick the ball away from danger.

‘You don’t know what you’ve got till it’s gone’ the adage goes, and now, with Jose Mourinho trying to rebuild Manchester United’s defence with Eric Bailly, Daley Blind and Chris Smalling, none of them are a patch on what the Englishman brought to the Theatre of Dreams.

Stones is the young pretender, but we may never see a defender with such elegance, class and protective instincts than the kid Leeds United paid £18 million for 16 years ago.