Liverpool’s Littlewoods Cup second round, first-leg, tie against Fulham at Anfield in September 1986 would become a classic, “were you there?” moment as the Reds put ten past their Third Division opponents in a record domestic victory for the club; but with the ground less than half full, who actually was there and what do they remember of that eventful night?

A lot has changed in football over the past three decades or so, but that record-breaking night at Anfield provides the perfect opportunity to examine how the game differed then from the multi-billion pound industry it has become today, both on and off the field.

It’s early in the 1986/87 season and Liverpool are the team to beat. The defending league champions and FA Cup winners, having completed the double the previous year, they had won the League Cup four times running between 1981 and 1984 and few doubted they would get their hands on the trophy in its most recent guise once again, this time around under the guidance of new Player/Manager Kenny Dalglish.

The Reds’ start to the league campaign had been decent, if not devastating and winning four of their opening seven games prior to this meant they were handily placed as they looked to do battle once again with their near neighbours and perennial title rivals Everton. So a two-legged cup-tie against a recently relegated Fulham appeared to be nothing more than a formality as Liverpool looked to launch yet another three-pronged assault on silverware.

Of course, at the time, Liverpool, along with all other English clubs, were banned from European competition after the tragic scenes at Heysel prior to the 1985 European Cup final; something which placed an even greater emphasis on a domestic cup run with the chance of winning more silverware and yet another trip to Wembley.

In these days of every fixture being a “must-win-game'”or an opportunity for football tourists to tick off another ground or add to their half ‘n’ half scarf collection it might seem surprising that a crowd of just 13,498 were in attendance that night. 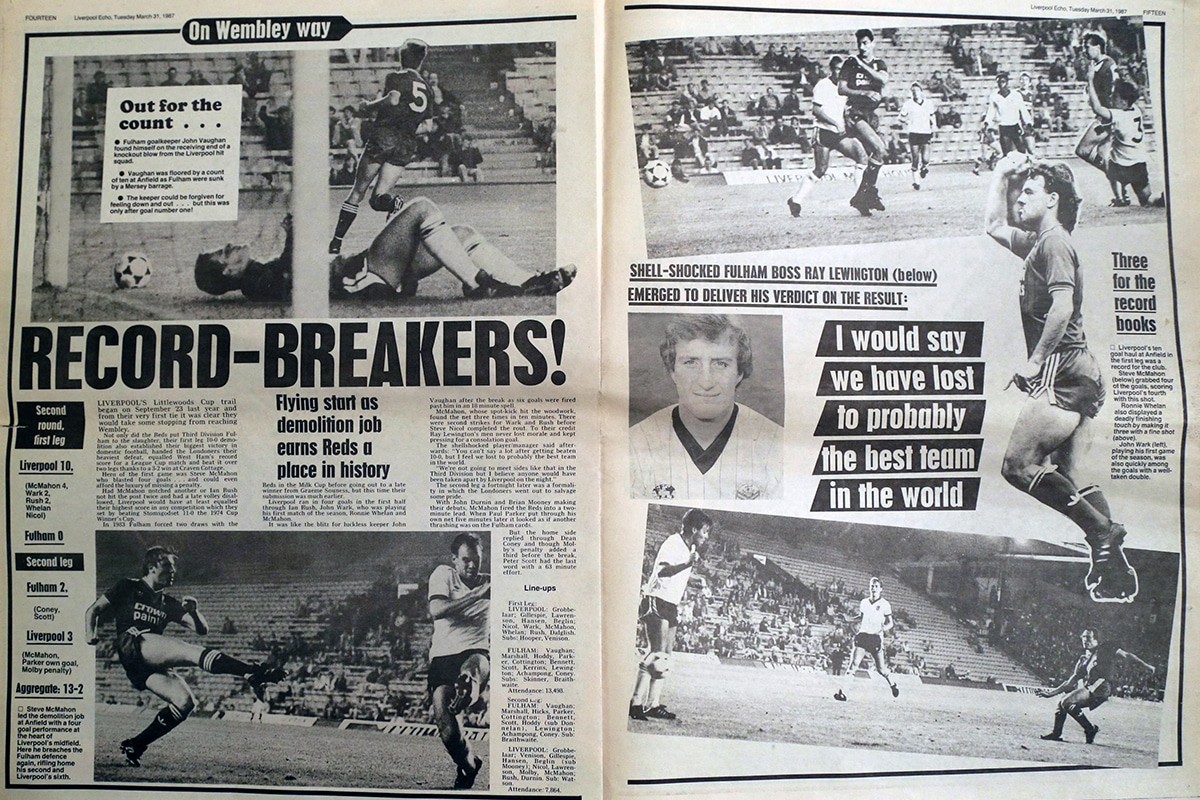 So can that be put down to a general apathy at a time of what seemed like unrivalled success, a lack of interest in a competition that was seen as some way down the pecking order for a club who had bigger fish to fry, or does it say more about the social and economic climate on Merseyside and throughout football as a whole in the mid 1980s?

As well as being a regular columnist and contributor to The Anfield Wrap, Mike Nevin has written widely about following Liverpool in the 1980s and was one of those who could genuinely say: “I was there,'”that night. He remembers exactly what he was doing back then and just what it was like going to watch games in the pre-Premier League era.

“They were hard times, but the cost of getting into the game was only about £2.50; perhaps an illustration of the severity of unemployment and its financial consequences to men with families to prioritise?” he says.

“People would pick and choose their games, so the second round of a cup we’d won four times in recent years was small beer I suppose. The 1980s saw a real hard-core support attend most midweek games; even in European competition, the crowds for early rounds rarely went above 20,000. The majority of those would be on the Kop, paying-in, and made up mostly of teenagers and the ‘lifers’ who would never miss a game.”

But despite the low turn-out and an apparent apathy for a game that many would sooner leave than take, Nevin, who was a student at the time, feels there was still something of a unique buzz when it came to those unpopular and often unpopulated midweek games under the lights at Anfield.

“The low crowds had a real charm,” he explains “There wouldn’t be much of an atmosphere at all; hardly any singing in fact. But there would be loads of anarchic chit-chat, a unique coded whistling that went round the Kop and just general abuse for the police and the opposition; even light-hearted ribbing of our own players at the time.” 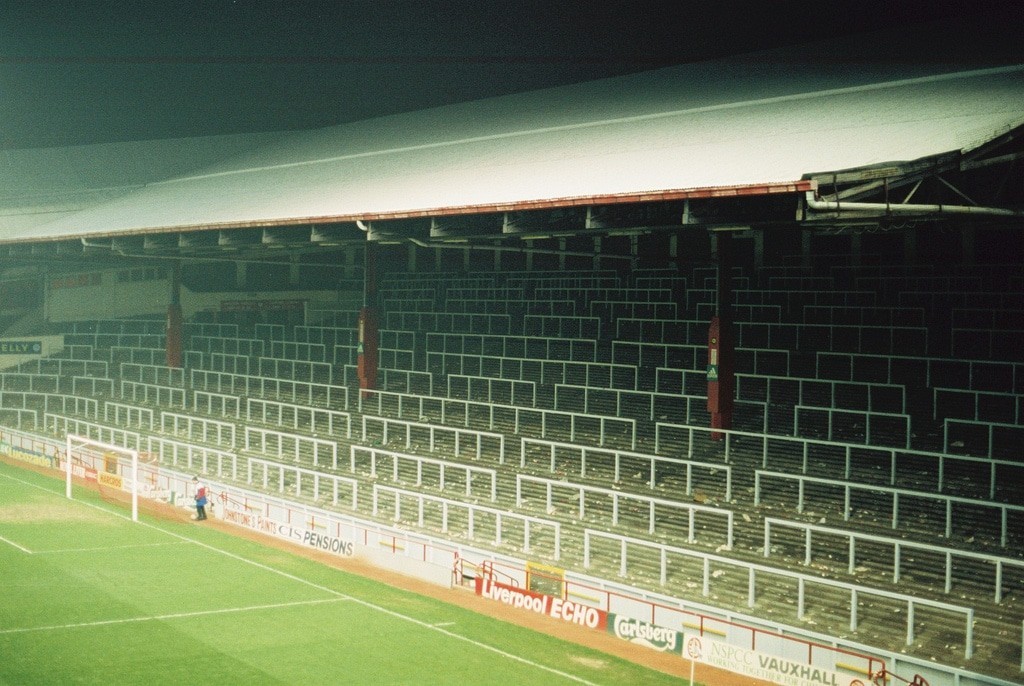 Writer and author Dickie Felton was also watching Liverpool regularly back then and was a season ticket holder on the Kop for much of Liverpool’s glory days; his memories of that night are similar when it came to those games that only the hard-core would thrive on.

“In those days if you were drawn against a lower league team Anfield would sometimes struggle to pull in crowds of 20,000,” he says. “I remember gates of 13,000 and 14,000 against some smaller sides and strangely the club kept all the stands open, so you'd stand on the Kop and stare out at sparse crowds. It was in vast contrast to league games.”

The poor crowd on the night of September 23rd 1986 was in stark contrast to Anfield on a Saturday afternoon when it was time to stage a league game, emphasising Bill Shankly’s famous adage that it was the league title that was Liverpool’s ‘bread and butter'.

“On a Tuesday we'd pull in less than 20,000 for the League Cup then almost double that gate for a league match a few days later,” says Felton. “Then at the subsequent league game the Kop used to playfully goad those in the Kemlyn Road and Main Stand by singing: ’Where were you on Tuesday night?’”

But he doesn’t feel that the competition was dismissed by Liverpool fans or shunned in any way, more that it was a case of prioritising at a difficult time for the city. “Liverpool suffered from high unemployment in the 1980s and people saved their money for the weekend matches. Maybe there was more of a feeling of saving a couple of quid and enjoying the Saturday more in an era when you could enjoy a few pints some chips and the match for around the same price of today's half and half scarves.”

Those who did turn up that night would be rewarded with a swashbuckling performance from a Liverpool side who many felt hadn’t quite kicked into gear yet. Early goals from Ian Rush and John Wark put the Reds 2-0 up inside 10 minutes and by half-time it was 4-0 thanks to strikes from Ronnie Whelan and Steve McMahon.

There was no let-up in the second half either as Liverpool put a sorry Fulham side to the sword. Rush added another while McMahon completed his hat-trick with 20 minutes of the game remaining and when Ian Rush scored to make it 8-0 with 15 minutes to go, Liverpool’s record score of 11-0, which had come against Norwegian side Stromsgodset in 1974, looked to be under threat.

“That’s the mad thing about those low-key games where you racked up a hatful of goals,” points out Mike Nevin. “The opener would barely raise a cheer but by the time the sixth or the seventh goes in you’re going mental!”

McMahon netted his fourth of the game before Steve Nicol popped-up to make it 10 with seven minutes still on the clock and despite McMahon missing a penalty the record still looked in sight. But that was to be the end of the scoring for one night as, despite their best efforts, Liverpool couldn’t get the goals they needed to create another piece of history for the club.

“I remember coming away from the game disappointed that having gone 10-0 up on 83 minutes we couldn’t get another and create a new club record,” recalls Nevin. “It seems ridiculous now that this was only the first leg. Imagine Fulham contemplating a 10-0 deficit for the return. Perhaps if they’d scored an away goal things might have been different!” 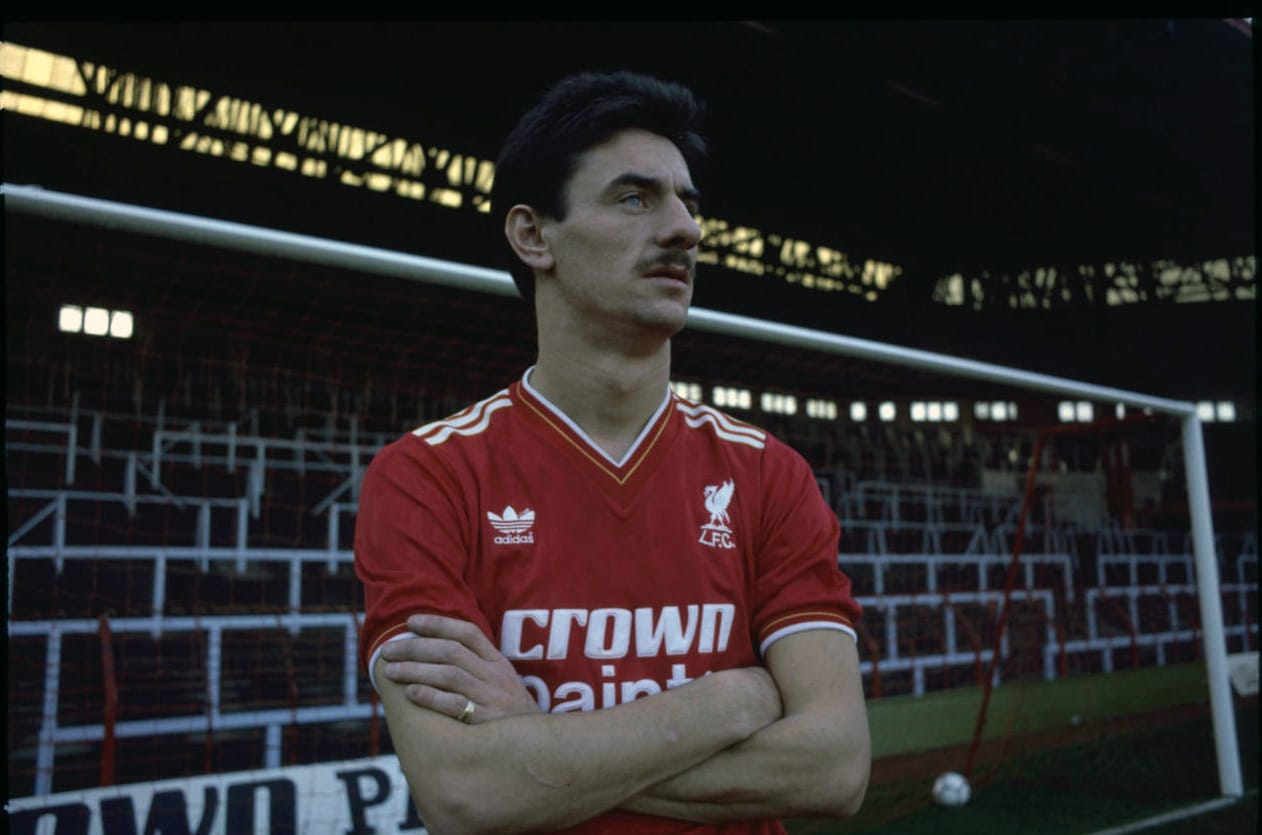 The result was Liverpool’s biggest ever domestic cup win and equalled the ten goals they put past Rotherham in 1896. Yet for those who were there, like Mike Nevin, it wasn’t just about witnessing something that would go down in the annals of football history, it was about being part of something – an attitude and an ethos that surrounded going to football then that is rarely seen in the game today.

“It was magic,” he says. “The ground stank of beer and smoke and was a genuine teen paradise. You learned so much about life on the Kop in those days; it was an edgy, cultural breeding ground that also taught you to look after yourself. There was great humour too, when McMahon missed that penalty he was serenaded by a chant of ‘What the f****n hell was that?!’ from the Kop.

“Nowadays, because of the cup credit system, the ground is always full for League Cup games and there’s a big rendition of ‘You’ll Never Walk Alone,’ with the flags flying, which feels completely out of sync with the size of the occasion, it feels totally staged and not at all organic.”

Dickie Felton too shares a similar opinion to that of his fellow match-going Red of the time when he reminisces about going to games back then. “Ultimately these matches were played in an era pre-Premiership – a time when football wasn't fashionable,” he says. “So the people who attended were not sightseeing, they were just supporters from the local area.

“It's strange to consider a half-full Anfield when today it's sold out for every game. Most of my mates would go to the match straight after school. Maybe it was some kind of rite of passage in a sense but I don't really remember any bravado about it. It was just lads going to the match. You'd be able to see Kenny or Rushie banging in a few goals, they were great times!”

Not surprisingly Liverpool comfortably eased through the tie after winning the second-leg 3-2 and went on to reach the final of the competition at Wembley, eventually losing to Arsenal; while in the league they finished runners-up to neighbours Everton, who won their second title in three years.

But for those who were there that night, recalling the emphatic 10-0 demolition of Fulham, if nothing else, gives them a chance not only to look back on a truly memorable occasion; but also on what a different place football has become in the years since – for better or for worse.

Mike Nevin is a regular columnist for The Anfield Wrap and author of “On the March with Kenny’s Army,” while Dickie Felton is a respected writer and blogger, covering everything from Morrissey to Marine Football Club.