Imagine Olivier Giroud's last ten months… now apply that to your own life.

You take some time away from your day job to undertake a freelance project. In the process, you win the biggest prize in the field, bringing glory and happiness to your nation. Then you return to the day job, the old nine-to-five, and it’s like none of that ever happened.

“Of course it's frustrating,” Giroud admitted in an interview on French radio this week. “Today, I have the impression there is clearly no competition [for places in Chelsea attack] since January.

“The future may be hectic this summer,” he later added. “I'm not afraid to go down a level to have more playing time. It could be I end my career in France.”

It could be, but the money gap between the Premier League and Ligue 1 – barring PSG – is pretty big. And there are question marks over whether Lyon and Marseille, two French sides Giroud has been linked to, could afford his salary demands.

This is becoming a wider problem in English and European football. The tidal wave of TV money gave Premier League clubs the opportunity to attract and keep their stars, but there’s now an even larger gap between what they pay and what everyone else can.

Take Giroud’s former club, Arsenal. Their struggles to get Mesut Özil off their wage books is another example of this. Being able to pay a star player £350,000 a week – two, three, or four times more than a lot of clubs would be able to pay for him – is great to ensure he doesn't leave. It’s significantly less great if he needs to be moved on.

So while Giroud may want to return to his homeland, another couple of years in England might be a more realistic option. And in top flight, there are some interesting opportunities open to him.

The Toffees would be a logical front-runner if Giroud was to move to another Premier League club. The striker's role in Marco Silva's side has been a problem position all season; neither Cenk Tosun, Richarlison, or Dominic Calvert-Lewin have nailed down that spot.

Giroud is a similar profile player to that trio; able to be a physical focal point of the attack and yet dovetail with creative, goalscoring midfielders such as Gylfi Sigurðsson, and wingers such as Richarlison.

The Frenchman has been linked with a move to Merseyside in the past and it wouldn’t be too hard to see it happening this summer if the money was right for both parties.

In Christian Benteke, Palace demonstrated that they’re not averse to spending big money on a target man.

However, through wretched form last season and injury this campaign, it hasn’t gone too well for Benteke. Since the summer of 2017, the Belgian has simply stopped scoring – as we detailed here. 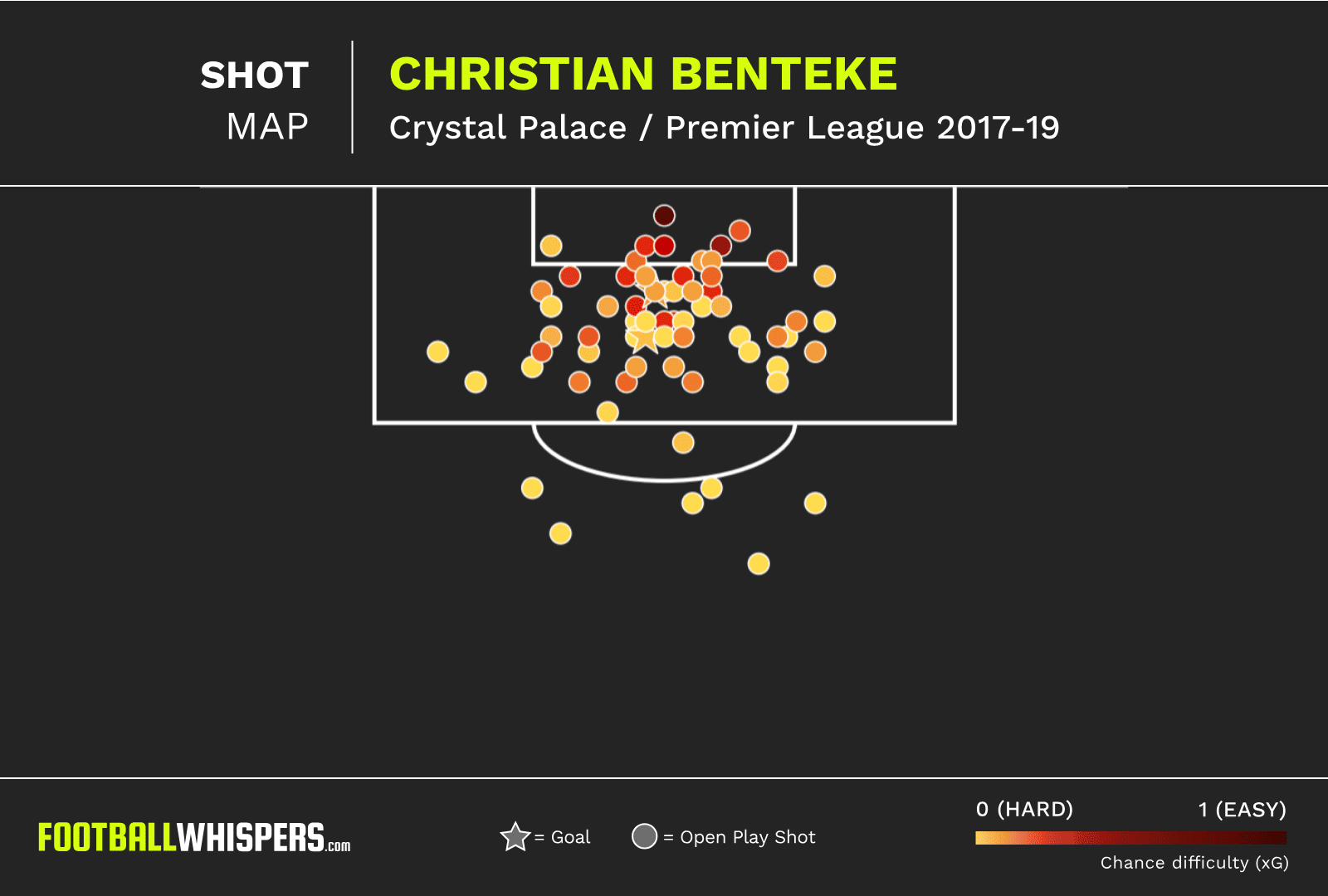 Palace may feel burned by that experience but at least Giroud has finished some of his chances in the past two seasons. 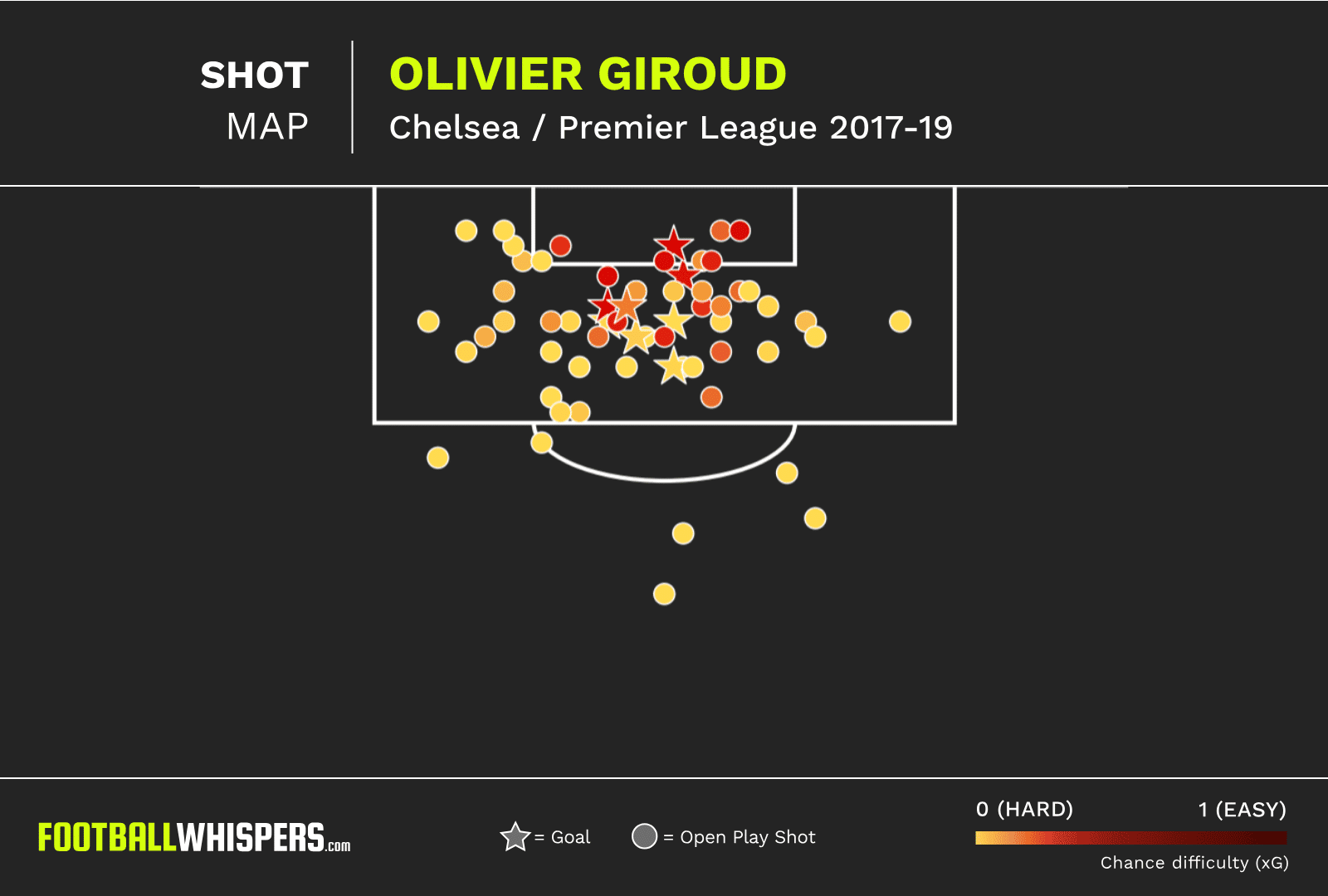 His levels of production have been impressive as well. It’s significantly helped by primarily being a substitute and coming on and wreaking havoc, but Giroud contributed 1.1 expected goals or expected goals assisted per game in 2017/18, and 0.81 per game this term.

These levels would surely go down if he was getting more regular game-time and wasn’t as fresh in the twenty or thirty minutes he was on the pitch, but they’d still be at a good level for Palace’s place in the top flight.

The Eagles’ current leaders in these stats are the trio of Jeffrey Schlupp, Wilfried Zaha, and Andros Townsend on 0.35, 0.34, and 0.32 expected goals or expected goals assisted per game.

Giroud and Glenn Murray, what a strike partnership that’d be. More likely, of course, it’d be one or the other, allowing Chris Hughton to use them in more concentrated bursts.

Both are well into their 30s – Giroud, three years younger, could even be considered a ‘younger model’ – and having a like-for-like rotation option could be good for both players.

Depending on how far around the M25 Giroud has moved since joining Chelsea, Brighton may even be commutable. Wind down the career by the sea, what could be better?

It might even make him think he’s living in Marseille…