With his goal in France's 4-0 win over Iceland on Monday, Olivier Giroud took his Les Bleus tally to 35, making him the third-highest scorer in his nation's history.

The Chelsea striker's haul is greater than that of legends like David Trezeguet, Jean-Pierre Papin and Juste Fontaine, while only Michel Platini and Thierry Henry have scored more goals for France.

Yet Giroud isn't considered to be in the same bracket as many of the illustrious names from French football's past he rubs shoulders with on the all-time scoring list.

While no one would argue Giroud matches Henry's dynamism, Zinedine Zidane's creativity or Trezeguet's ruthlessness in front of goal, he bring a unique skillset to the equation in arguably the most talent-rich squad in international football; his contribution and importance to Didier Deschamps' side should not be underestimated.

Giroud is far from the most prolific forward in world football, but his strike rate for France is impressive, and his aerial ability is a useful weapon for the world champions. 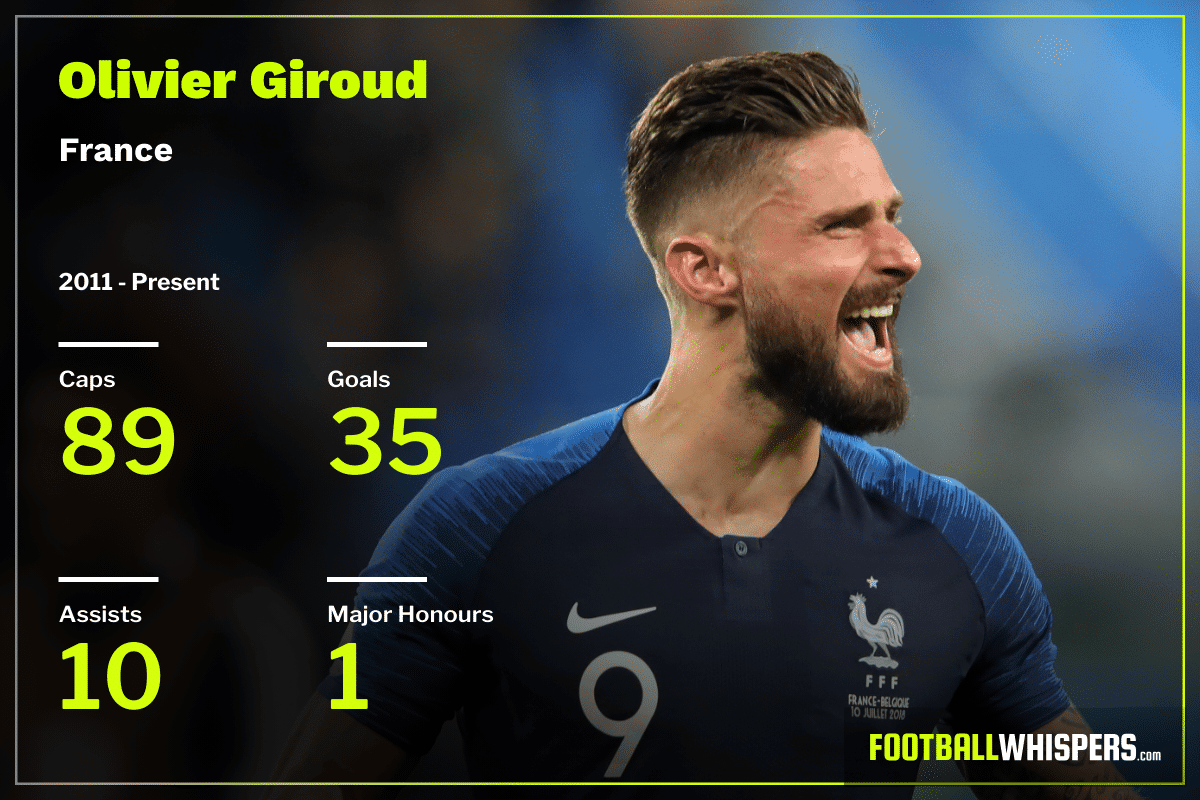 But Giroud's true value to France lies in how he is able to bring the best out of those around him, emphasising the gifts of his more talented attacking colleagues.

This was never more evident than at last summer's World Cup, a tournament in which the Chelsea striker failed to score, yet was crucial to France's success.

Giroud is the perfect foil for Antoine Griezmann, arguably the best player at Deschamps' disposal. The Atlético Madrid forward always performs best when able to play off a physically dominant centre-forward, with Giroud available for the kind of slick one-twos Griezmann uses so well to work space for himself, or to hold up the ball while the Ballon d'Or contender burst into space. Griezmann has never been quite as effective for France when starting up front without his partner in crime.

Kylian Mbappé similarly benefits from Giroud's presence. The speedy Paris Saint-Germain prodigy, who played on the right wing during the World Cup, is lethal when released into space behind a defence. Giroud is able to draw the focus of the opposition while holding up the ball, timing perfectly a release for Mbappé.

“When you are a striker like me, you always play for the team-mates,” Giroud said during his goalless World Cup run. “Obviously I prefer to have chances and score but, if I can make space for the others, I always try to choose the best option for the team. That’s the main thing.”

Stéphane Guivarc’h, formerly of Newcastle United, was a maligned figure for not scoring while the first-choice centre-forward in France's 1998 World Cup win on home soil.

But those attempting to draw parallels between Guivarc’h in '98 and Giroud in 2018 are underselling the Chelsea man's overall contribution. Unlike Guivarc’h, Giroud is the ultimate facilitator, with much of his work geared around creating space and chances for others, rather than pursuing goals himself.

“When France were world champions in 1998 I think [Christophe] Dugarry scored one goal and Guivarc’h not at all,” Giroud continued, commenting on the comparisons drawn between himself and the misfiring strikers of France's first World Cup triumph.

“If we are world champions without me scoring, I don’t mind. It means, if I’m on the pitch, the boss thinks I can help the team. I’ve got my part to play.”

And no one values Giroud more than Deschamps. Unlike the situation with Guivarc’h two decades ago, France are not short of top-class striking options, with Alexandre Lacazette, Alassane Pléa and Wissam Ben Yedder all thriving at club level – not to mention Karim Benzema, a controversial figure Deschamps continues to omit.

But Deschamps has continually picked Giroud through barren scoring spells, calls for him to be dropped and periods of inactivity with Chelsea and Arsenal, precisely because of how the 32-year-old knits this prodigious band of forwards together.

“He might not have the flamboyant style of other players but the team needs him in each and every match,” Deschamps said in Russia last summer. “Even if he doesn’t score, he’s useful in attack but also because of his game in the air, and in defence [on set pieces].

“He does many things for the game to be balanced. It’s the players around him that benefit from his presence because he attracts a lot of attention from defenders.”

Giroud may never be considered one of France's greatest-ever players, but he should be remembered as one of Les Bleus‘ most important.