Brighton and Hove Albion’s first season in the Premier League has gone better than expected so far.

The Seagulls sit in 12th with eight games to play. While relegation is still a possibility, it’s much less likely than it was at the start of the season and there are at least three worse teams in the division than Brighton.

Chris Hughton has done a fantastic job and when staying up is confirmed, which may not be too far away, his attention will turn to how to strengthen the squad over the summer.

The South Coast club won’t want to sit still and will be keen on injecting the squad with a few new faces to freshen things up at the Amex Stadium as they look to improve on their first year back in the top flight in England.

One decision he will have to make is what to do with Oliver Norwood. The midfielder is currently on a season-long loan at Fulham, which has no option for the Championship club to make it permanent.

Brighton will have to decide whether they want to keep the Northern Ireland international, or whether it is the end of the road for him at the Amex.

Fulham clearly have been impressed by him and tried to buy him outright in January. Their undisclosed bid was turned down, with The Argus claiming it fell below what Brighton wanted for the midfielder.

They obviously value him or else they would have let him leave, but has his form for the Whites done enough to convince Hughton to give him a chance in the Premier League?

When he arrived at Craven Cottage, Norwood said: “Having played Fulham the last two seasons, the football they have played, it suits my style, it suits the way I like to play football.” 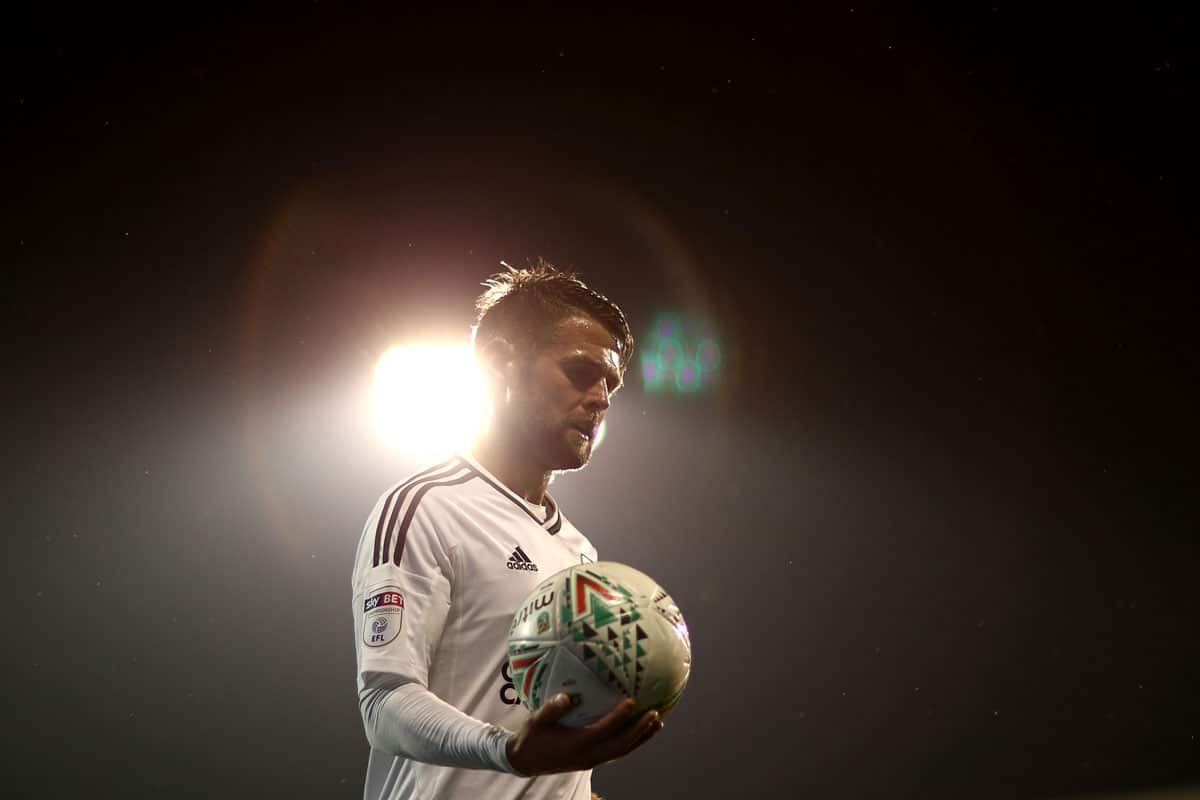 Since putting on the white shirt, he definitely has fit into the way of playing instilled by Slaviša Jokanović at Fulham, with the Championship promotion contenders liking to dominate the ball and out pass the opposition.

That is significantly higher than any Brighton player. For the Seagulls, Dale Stephens leads the way, on 50.7, followed by Bruno on 44.9.

The Northern Irishman’s passing accuracy of 85.2 per cent sees him place 15th in the Championship, which is pretty decent.

However, once again he’s behind that man Cairney. The Scotland international’s passing accuracy rate is at 91.7 per cent so far this season, higher than anyone else in the second tier of English football.

Fulham’s No.10 is one of the stars of the Championship, but for the first half of the season he wasn’t really firing, due to a recurring knee injury.

That gave Norwood a run in the team and he was key for Fulham in the early stages of the campaign, but since Cairney’s been back, he’s fallen out of favour. 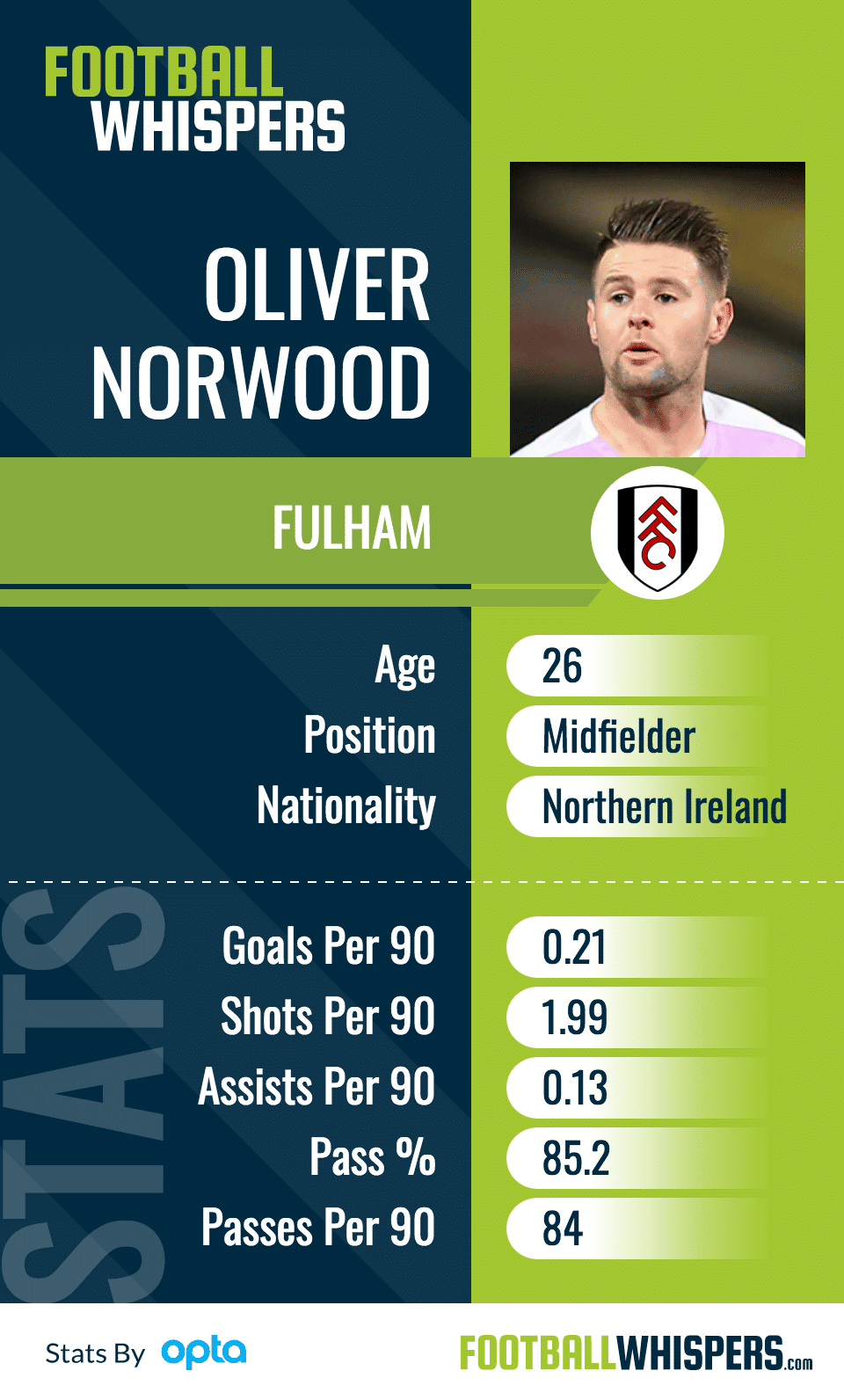 The last time the 26-year-old played 90 minutes in the league was on February 3, against Nottingham Forest, when he notched an assist in a 2-0 win. Since then, Fulham have played eight matches, but Cairney has been preferred to Norwood to play in Jokanović’s midfield trio alongside Stefan Johansen and Kevin McDonald.

To make things worse, when the Fulham captain was taken off against Queens Park Rangers in their last league match, it was Rui Fonte, rather than Norwood, who has chosen to replace him.

While the Whites may have wanted him in January, given that he’s now not a starting player, they may not be as keen on him in the summer.

But, if they don’t go up, The Mirror report Cairney is likely to leave, and in Norwood they have a ready-made replacement.

Indeed, speaking in January, Hughton admitted that a permanent move to Fulham may be best for him.

“He’s gone there and played games. They are on a good run at the moment. If it’s right for all three parties then yes, possibly something will be done,” he said.

“At this moment he is still our player and we are delighted he is playing regular games and playing in a team that is playing well.”

That doesn’t sound like he’s too keen on him. The truth is, Brighton don’t need a player like him. He doesn’t suit the style that they are currently employing.

The fact that he’s made 33 passes more per 90 minutes than any Seagulls player this season suggests a difference in how they play the game to how Norwood does when he’s thriving. And Brighton have been successful this season. There’s no need for a midfield overhaul; Stephens is doing a great job as their midfield anchor, so why adapt for someone they do not seem to need?

And if Hughton decides he wants a player in that mould, why not go for Cairney if Fulham don’t go up? He seems to be the upgraded version of Norwood.

In the summer, Norwood will only have 12 months left on his contract. His stock will be high after a relatively impressive season with Fulham, even if not been part of the starting XI in recent weeks. The time will be right to cash in on him. Should a bid be right it will be better to sell rather than have him as a player in the squad who Hughton does not seem to want in the Premier League.