Celtic are a force to be reckoned with both on and off the pitch these days.

It was less than two weeks ago that Neil Lennon’s side stunned the Stadio Olimpico to clinch a stoppage-time win over Lazio and secure their place in the knockout stage of the Europa League. They also sit joint-top of the Scottish Premiership having taken 31 points from a possible 36.

This is after the Bhoys received a club-record £25million fee for Kieran Tierney in the summer when the Scotland international left Parkhead to join Arsenal. That move arrived 12 months after Moussa Dembélé departed for Lyon in a deal worth £20million.

The Scottish champions are getting big fees for players once again, a sure sign they’re doing something well. And if reports are accurate, they could be set to land their largest windfall yet in the not too distant future.

A host of Serie A clubs are keeping close tabs on Odsonne Édouard, so claim media outlets in Italy, with Lazio, Roma and Napoli named as potential destinations for the France Under-21 international. However, Napoli Online state Italian clubs can’t afford the price tag placed on the 21-year-old.

The Bhoys are believed to want close to £30million for the former Paris Saint-Germain starlet with Premier League side Crystal Palace reportedly the only club willing to pay such a fee.

The Eagles have started the season well and find themselves just a point behind Manchester United. However, Roy Hodgson’s men are struggling to put the ball into the back of the net. In their 12 matches they’ve scored just ten goals and currently have a goal difference of minus six – the fifth-worst record in the league.

Their underlying numbers don’t make for pretty reading, either. When looking at expected goals, the Eagles are ranked 19th in the Premier League with a total of 11.48. Only Newcastle (7.68) are below them.

Meanwhile, expected points for the season has Palace in 17th position and while the sample size isn’t the largest, Hodgson will want to improve on these figures before their overperformance bubble bursts.

Palace are on the hunt for a new forward and have been for quite some time. Christian Benteke has failed to replicate the form he showed at Aston Villa and their other out-and-out forwards have failed to fill the void.

Wilfried Zaha spent time up top but he's much better as a wide-forward. Jordan Ayew is doing a job but the 28-year-old is by no means a ruthless goalscorer.

Brazilian Gabigol has been linked with a move to Selhurst Park recently with the Eagles keen to add a forward to their ranks. Alfredo Morelos, Olivier Giroud and Michy Batshuayi are also reported targets, as is Wolfsburg's Wout Weghorst. 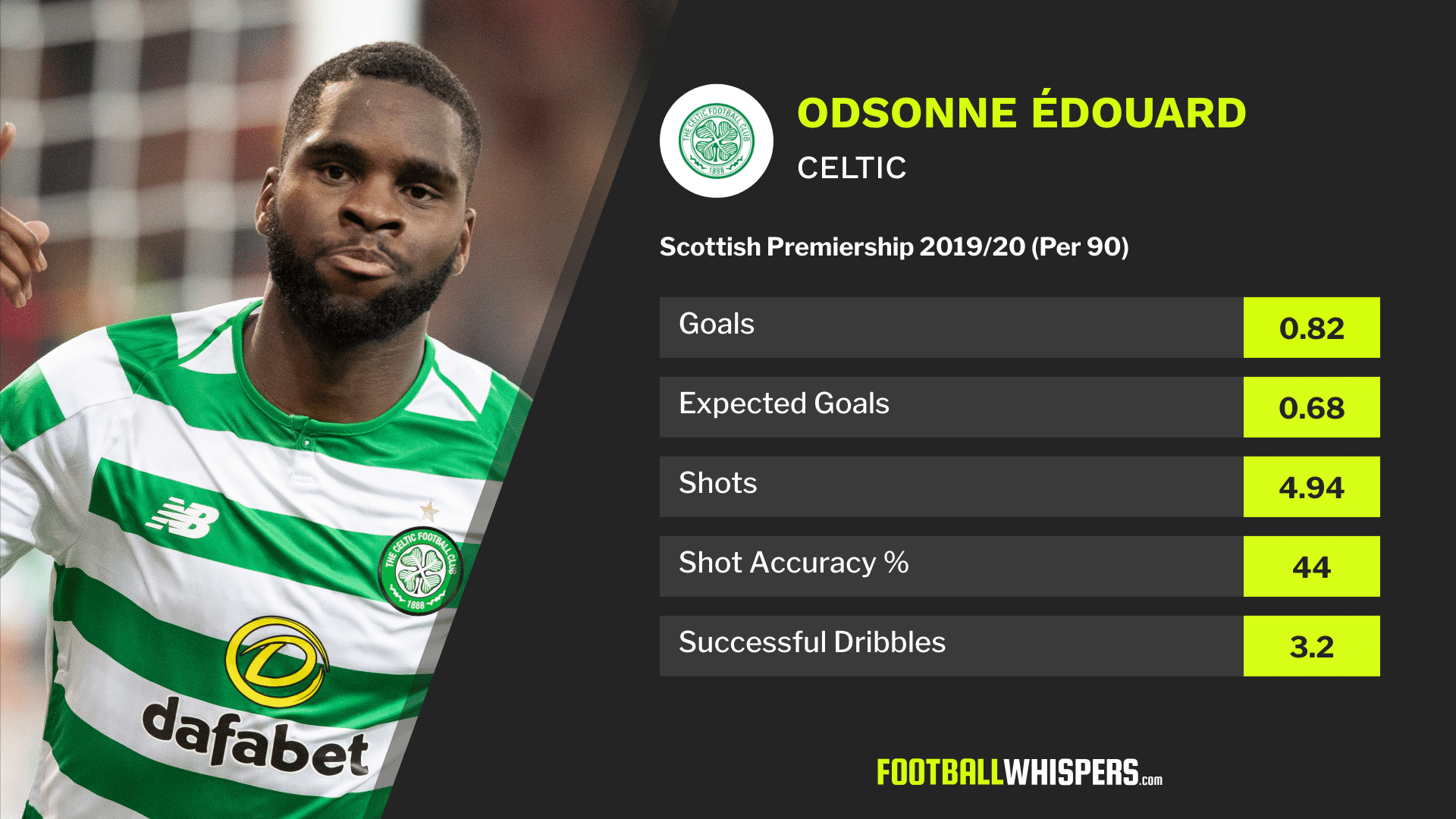 But of all of those linked, Édouard is perhaps the most well-rounded. The 21-year-old lacks the explosiveness of Morelos or the guile of Gabigol, and he doesn't have the brute, physical strength of Giroud but the Frenchman has a touch of them all. And this mix is what makes him the ideal target for the Eagles.

So far this term he's averaged 0.82 goals from an expected goals average of 0.68. He's landing 44 per cent of the 4.94 shots he's having on target and, remarkably, he's completing 50 per cent of his dribbles.

The sheer volume of efforts he's having could be an issue, however, as he's not likely going to get close to five per 90 at Selhurst Park. But the fact he's getting nearly half on target highlights his ability to work the goalkeeper on a regular basis.

The Celtic forward's general link-up play is intelligent, too. It'd have to be if he was going to get the best out of Zaha, Ayew and Andros Townsend. 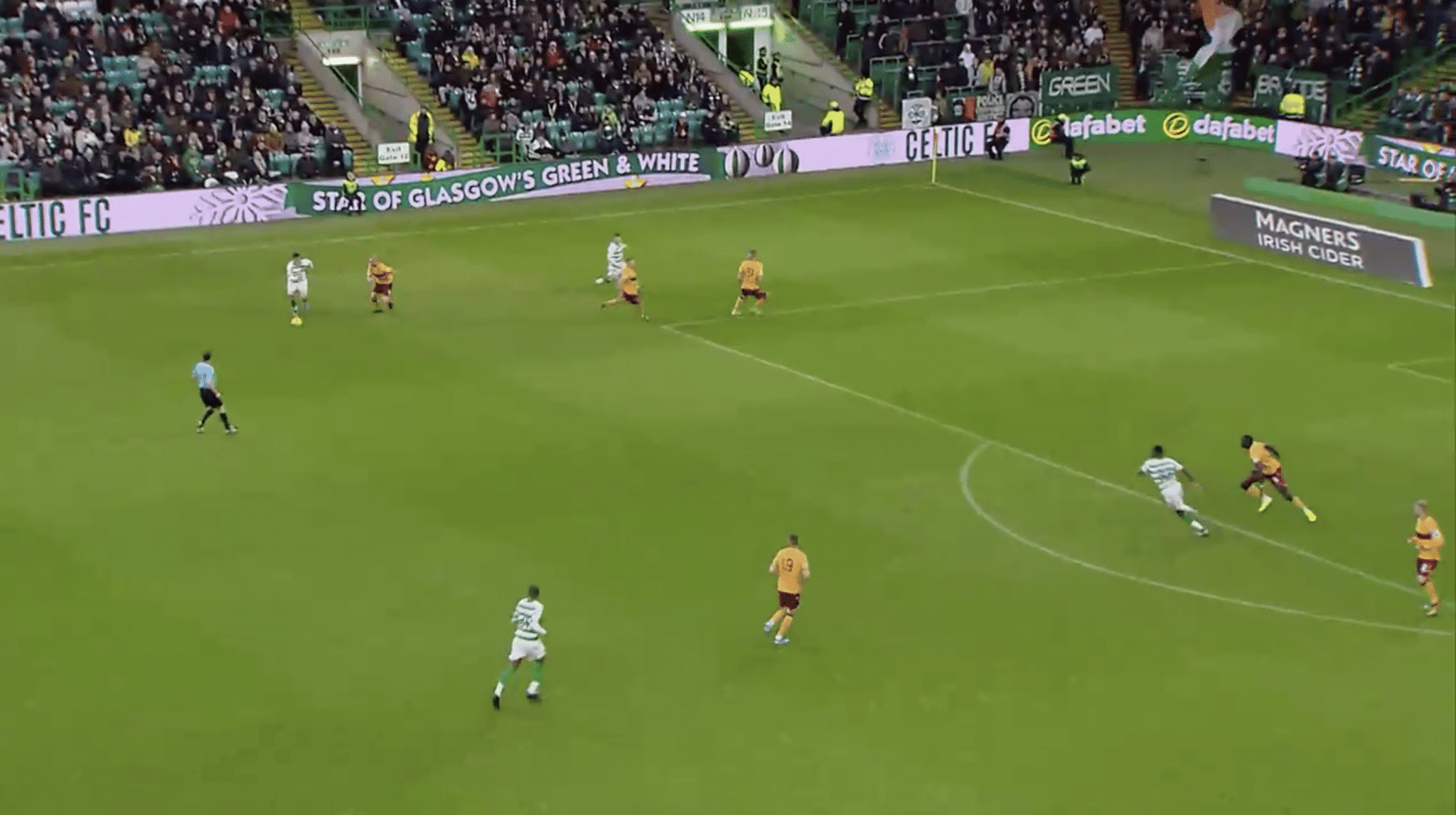 In the screenshot above, Édouard is on the edge of the 18-yard box. He could hold his position and look to receive the ball into feet. He's certainly strong enough to keep possession and find a team-mate but he'd have his back to goal and would be stationary.

Instead, the former PSG player drags the centre-back away from the goal and creates space for a team-mate to attack. The ball is clipped into the area, as shown in the screenshot below. 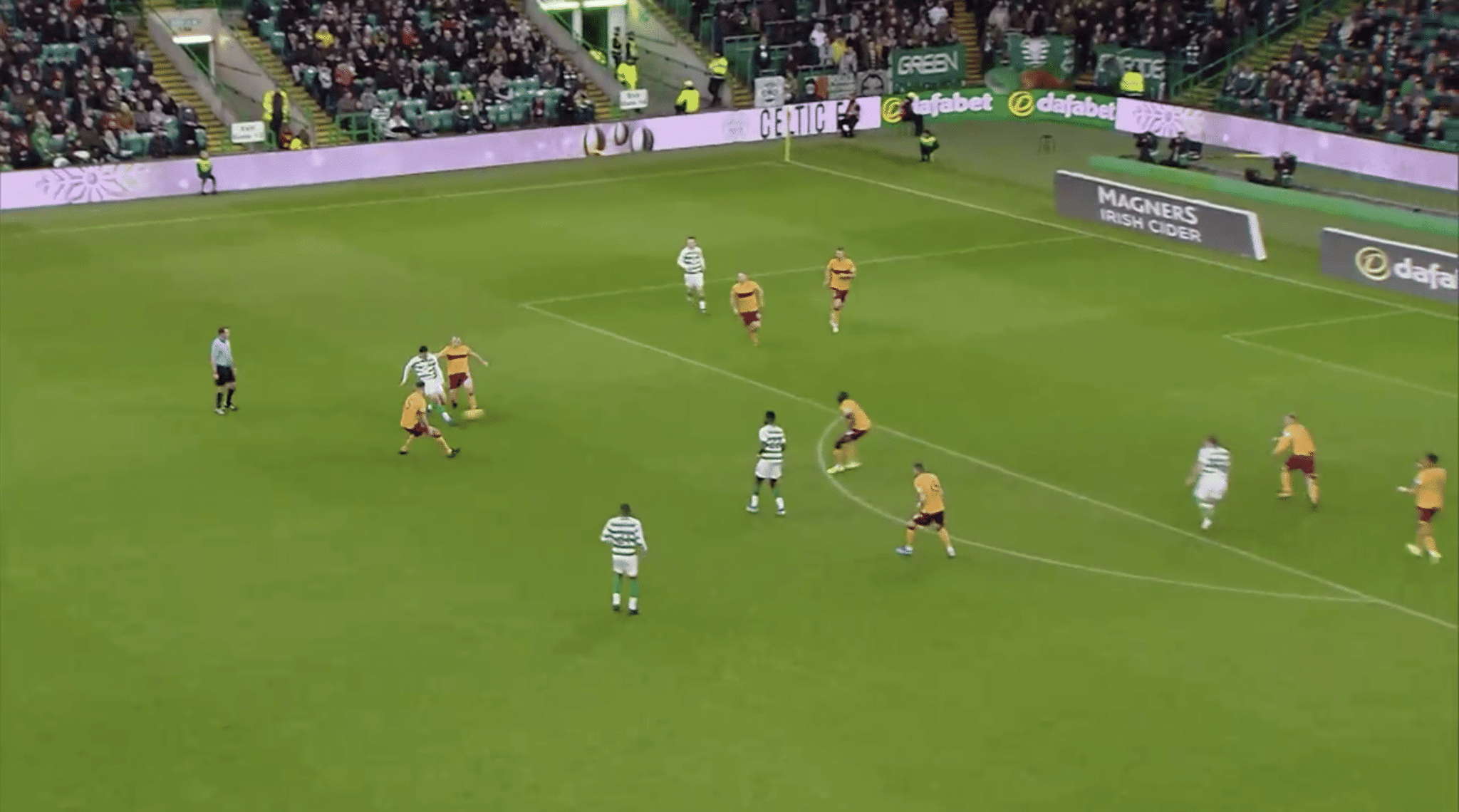 James Forrest, the Celtic player making the run into the area, is dispossessed but the ricochet falls nicely to Édouard, who'd followed up play. He then expertly fires into the top corner.

It's only a snippet but those few seconds show what the forward is all about. He's selfless enough to move away from goal if it helps the team fashion a chance. The 21-year-old is switched on enough to come alive during the second phase of play and he's a clinical finisher, finding the top corner from a tricky situation.

Spending £30million on a player with fewer than 40 Scottish Premiership goals to his name may sound reckless, but Édouard has something special about him.

He seems readymade for a move to the English top-flight and if interested parties don't make a move in January, Celtic will likely demand a lot more for their record buy when he has that breakout season to his name.