Celtic are on the verge of completing a deadline day signing in the form of Odsonne Édouard. The French striker could join the reigning Scottish champions on a season-long loan deal according to BBC Sport.

Brendan Rodgers has at times had to use a false nine due to a lack of natural striking options. With Moussa Dembélé and Leigh Griffiths his only genuine outlets up front, Tom Rogic and James Forrest have both taken up the role when necessary.

Now, however, the Celtic boss could have a third player to call upon in Édouard. The 19-year-old came through Paris Saint-Germain’s academy and is highly rated in his home country; now he could get a chance to prove himself as a regular first-teamer and experience Champions League football.

Born in French Guiana, Édouard grew up in France. After a spell with amateur side AF Bobigny, in 2011 he joined the PSG youth setup, where he became a prolific scorer. He then moved up to the club’s B team and found the net three times in 13 outings while establishing himself internationally.

He was a regular finisher for the France under-17 side, hitting an incredible 15 goals in 12 games. This included an exceptional performance at the 2015 European Under-17 Championship in which he scored eight goals, was named the tournament’s best player and helped his country to the title.

Édouard continued to represent his country at under-18 (four goals in nine games) and under-19 (five goals in 13 games) level. And last season he got his first taste of Ligue 1 football, having left Paris Saint-Germain for a loan spell with Toulouse.

However, the move didn’t quite go to plan. He made just four starts, scored just one goal, and had his spell cut short after his involvement in an airgun incident. He will be hoping to get his career back on track at Celtic.

WHAT DOES HE BRING TO CELTIC?

Football Whispers’ own French football expert, Andrew Gibney, believes the player has what is necessary to succeed in the Scottish Premiership. “Édouard has all the attributes to become a wonderful striker,” he said. “He’s powerful, quick and can finish. On the pitch there are few doubts he has what it takes.” 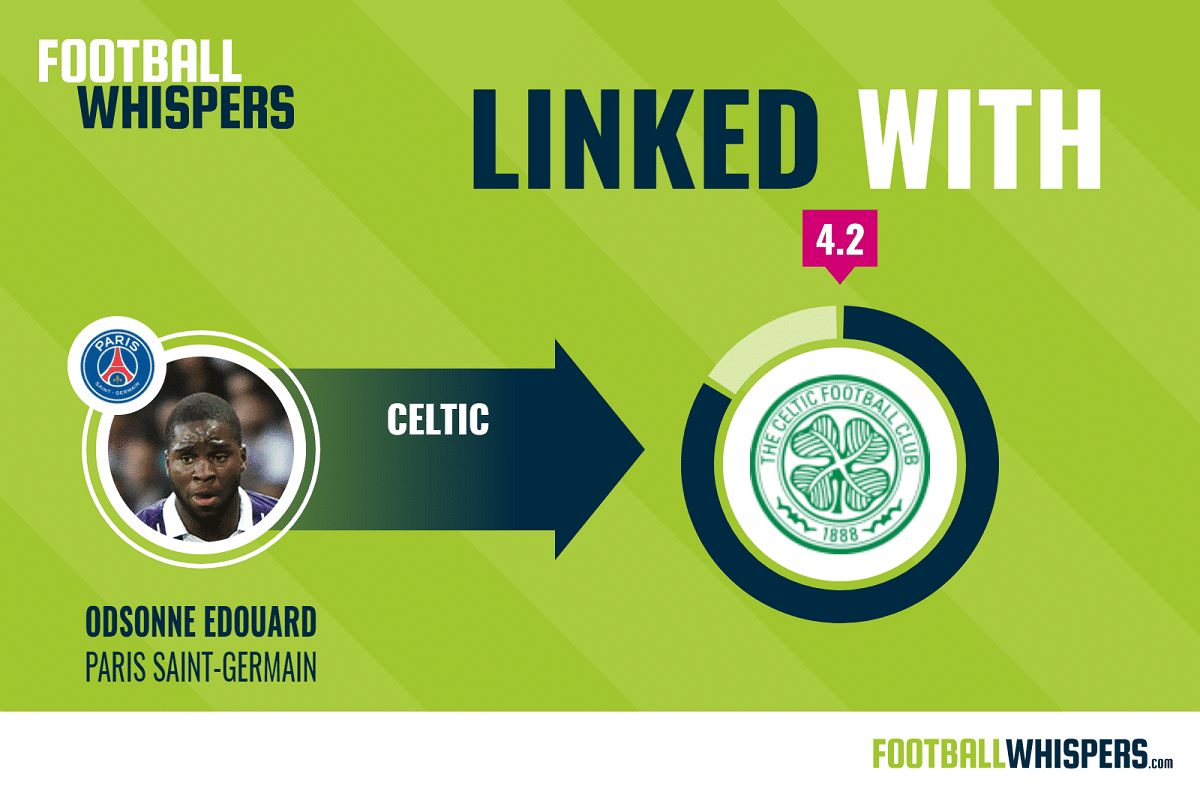 Standing at over 6ft tall, Édouard may have the physical proportions of a classic centre-forward, but he is more than a mere reference point for attacks.

He is light on his feet, with good dribbling skills and an ability to find space in the tightest of situations. All of those traits should help him settle in Scotland, where he will likely come up against packed defences on a weekly basis. And, on top of all that, he appears to be a composed finisher.

Celtic already have two strong strikers at Scottish Premiership level in Dembélé and Griffiths, but the PSG academy graduate could offer serious competition to both.

WHAT THE STATISTICS SAY

Of all Toulouse’s strikers last season, only one had fewer poor touches than Édouard. On average he failed to control the ball 1.4 times per game, a number only the experienced Ola Toivonen could better.

And, despite rarely featuring in the starting line-up, the young Frenchman showed a willingness to take players on, averaging a promising 0.6 dribbles per game.

Celtic place great emphasis on the quality of their possession, and the strikers need to be more involved in the building of attacks than simply waiting for the chances to arrive. With this in mind, Édouard’s passing figures are worth taking note of.

He averaged 8.3 passes per game, which was among the lowest in the Toulouse squad. However, his 65.2 per cent completion rate was respectable, while his 0.3 key passes per game was positive for a centre-forward.

Celtic may be looking for him to provide more than he is used to defensively, though. Édouard averaged just 0.4 tackles and 0.1 interceptions per game last season.

It’s important to note that the striker’s 2016/17 statistics came from a short spell in a side that did not typically dominate possession. Indeed, only three Ligue 1 teams saw less of the ball than Toulouse’s 46.4 per cent average.

This would not be the case for Édouard at Celtic, where he would see more of the ball and would likely have more scoring opportunities. In a more creative environment, his raw talent could shine through.