Since the inception of the Premier League back in 1992, Liverpool have had a number of cursed positions. The Reds have had issues finding suitable long-term left-backs, but it's at goalkeeper they've had their toughest task. With the exception of Pepe Reina, no Liverpool shot-stopper has been of the requisite quality for a team with title aspirations.

However, recent reports have linked the Reds with a big money move for Atlético Madrid keeper Jan Oblak. While it's not a move many fans envisaged at the start of the season due to his high release clause, recent events on Merseyside have led many to believe Jürgen Klopp's patience is wearing thin and he now realises he might have to spend big to remove the goalkeeping curse at Anfield.

David ‘Calamity' James struggled and Sander Westerveld, his replacement, was perhaps even less consistent. Chris Kirland's Liverpool career was plagued by injury and Jerzy Dudek had his moments but was far from reliable.

Reina showed the difference a genuine world-class keeper made to the team, but his form deteriorated and, by the time he left, the opposition knew there was a bullseye at his near post.

Simon Mignolet kicked off his Liverpool career in fine form, saving a penalty on his debut in a 1-0 win over Stoke City on the opening day of the 2013/14 season. However, his form at Anfield has been anything but safe and he's lost his place in the first team on a number of occasions.

Brendan Rodgers dropped him during the 2014/15 season, opting to give Brad Jones a whirl between the sticks. The Australian disappointed and Rodgers decided Mignolet was the lesser of the two evils.

It was a similar story in 2015/16 when, unimpressed by the Belgian's performances, Klopp dropped the former Sunderland man and put his trust in Adam Bodgan. It was a mistake and one the German corrected.

Last season saw Klopp install Loris Karius as his No.1 as soon as the keeper returned from a hand injury. But the man signed from Mainz failed to adapt to the rigours of the Premier League and Mignolet reclaimed his starting place in December 2016.

The former Sunderland shot-stopper was, in the eyes of many, the undisputed first choice goalkeeper for the Anfield club. That was until this week, when Klopp made the decision to start Karius against Manchester City. He then revealed afterwards that the ex-Mainz man was now his first-team goalkeeper moving forward.

Something Mignolet hasn't taken well. The 29-year-old revealed in a recent interview with the Liverpool Echo that he is considering his options and “this situation can not last too long” as he eyes a place in Belgium’s World Cup squad.

While Karius is Klopp's guy for now, to say he's secure would be naive. Paul Joyce of The Times has revealed that Liverpool have a shortlist of keepers drawn up as they plot their summer moves.

Joyce's report names Jack Butland, previously linked to The Reds in a Football.London exclusive, Alisson, who Gazzetta dello Sport revealed was a Liverpool transfer target earlier in the month, and Jan Oblak as the three potential keepers to join Klopp's revolution at Anfield.

New Stoke City manager Paul Lambert has revealed he won't be selling his No.1 this month, not even for £40million.

Any move to bring Alisson to the club will be a difficult one, with Roma reeling after losing Mohamd Salah during the summer for just £36.9million. The 25-year-old is valued at £44 million but would be money well spent as we explained last week; he could be the club's very own David de Gea.

The most interesting link of the three, however, is the one to Oblak. The 25-year-old Slovenian has matured into one of the best goalkeepers in the world during his three-and-a-half-seasons at Atlético Madrid. The keeper is the foundation for Diego Simeone's squeaky tight defensive unit at the Wanda Metropolitano.

The former Benfica man is under contract with the 2013/14 La Liga champions until 2021 and has an £89million release clause. Such a fee would break Liverpool's transfer record, but a goalkeeper like Oblak would transform the Reds from top-four hopefuls into genuine title challengers.

What Oblak would bring to Liverpool 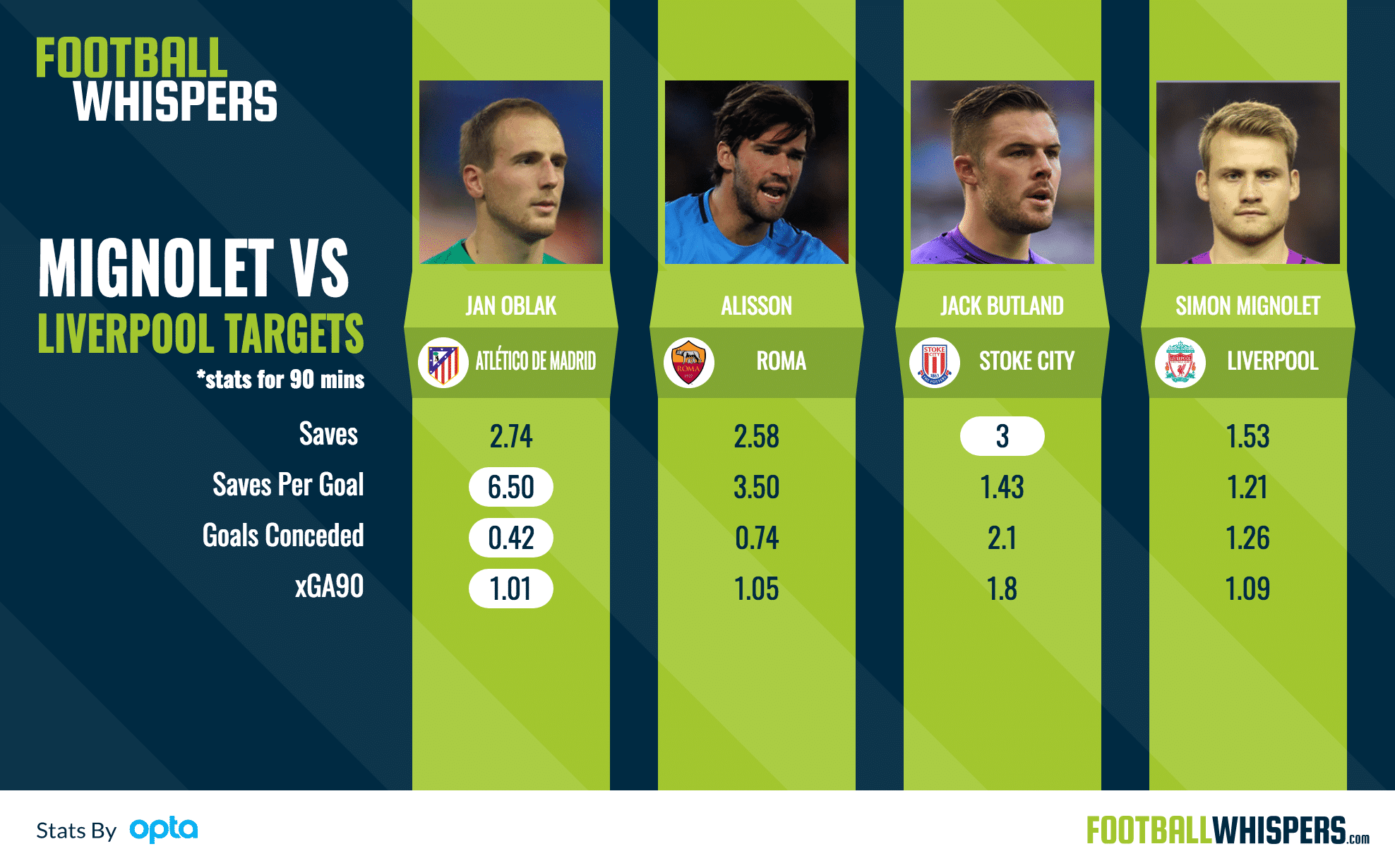 As previously mentioned in the detailed piece on Alisson, it’s never ideal to compare goalkeepers' stats, especially when it’s such a small sample size. It’s not fair and a lot depends on the players ahead of them. For example, if you’re peppered with shots then you’re likely going to be making more saves per 90 minutes and have a better saves-per-goal stat.

Whereas if you play behind a defence that makes a lot of blocks and you’re rarely tested, your stats will look worse. Are you a bad keeper just because you’re playing behind a really good defensive unit?

The expected goals against per 90 stat (xGA90, which can be found on understat.com) gives a value to the quality of chances a team faces. Of course, the opposition may miss a high-quality chance because of poor finishing, it's not always down to brilliant goalkeeping. However, for now, it's the best way to judge a keeper's influence.

Liverpool have conceded chances worth 21.3 goals in the games Mignolet has started, but the Belgian has actually conceded 24 goals. It's not much of a difference but it does mean the opposition have scored 2.7 goals worth of low-quality chances.

Whereas both Oblak and Alisson have conceded fewer than their xGA90. Roma's xGA for the season is 20.05, but the opposition have scored just 14, while Atlético's xGA is 19, but Oblak has only had to pick the ball out the back of his net on eight occasions.

In fact, no team in the top five leagues is over performing their xGA as much as Atlético are. Yes, they have a much meaner defence, but the opposition are still managing to create high-quality chances against them on a regular basis.

In fact, there's only a 0.08 difference in xGA90 between Liverpool and Atleti this season. Either the Spanish side is fortunate that the opposition they come up against can't finish as well as Premier League sides, or it's Oblak making the difference.

If Liverpool keep their xGA90 to around the one mark and sign a keeper who outperforms it by five or six – Oblak's average while in La Liga – then you're looking at a team that concedes 32/33 over the season. A team who would be in contention for the Premier League title.