One of the most talented players of his generation Carlos Alberto epitomised everything that was great about the Brazilian game. His attacking style, while still being a formidable defender, made him one of the most revered players ever to play the game, not just in Brazil, but throughout the world and he’s also credited with scoring probably the greatest team goal of all time.

Born in Rio, on July 17th 1944, Carlos Alberto Torres joined Fluminense at the age of 19 and quickly made a name for himself from the get-go, not only because of his great reading of the game, but also for his outstanding ball control, dribbling and playmaking abilities- facets that few defenders at the time could offer.

By 1965 he had moved to Santos, the club where Pelé's was now plying, and probably enjoyed the most successful period of his career, playing 445 matches and scoring 40 goals while winning a South American Super Cup, two Brazilian championships and five state titles in eight years.

Credited for being an early pioneer of the “wing-back” role Carlos Alberto became known simply as “O Capitão” for his leadership of the Brazilian national team and he was capped 53 times and scored 8 goals between 1964 and 1977.

Despite being included in the 44-man training squad for the 1966 FIFA World Cup he wouldn't make the final 22 for the tournament in England which saw Brazil knocked-out in the group stages, as the skilful South Americans learned the hard way that style was not enough when facing hard-tackling opponents who were prepared to out-muscle them at every opportunity.

Although Alberto was a product of Brazil's famous defensive approach, he was able to combine his natural ability with the art of stopping opponents and is thought by many to have paved the way for the strong, physical defenders that are as good going forward as they are in their own half that we see so often today.

When Joao Saldanha was tasked with restoring pride and passion to the national side four years after the disappointment of 1966, he recognised the leadership ability of Carlos Alberto, which he had been demonstrating on a regular basis at club level, and made him captain for his 1970 World Cup side in Mexico.

His qualities were unquestionable as a man and a leader and as captain he presided over the likes of strong-minded players such as Pele, Gerson and Rivelino, who may well have been more talented than their peers, but lacked the leadership skills that Alberto could provide. Many of these players were captains at their own club sides but deferred to Carlos Alberto, who had a poise and presence about him and was not averse to dressing down his more celebrated team mates. 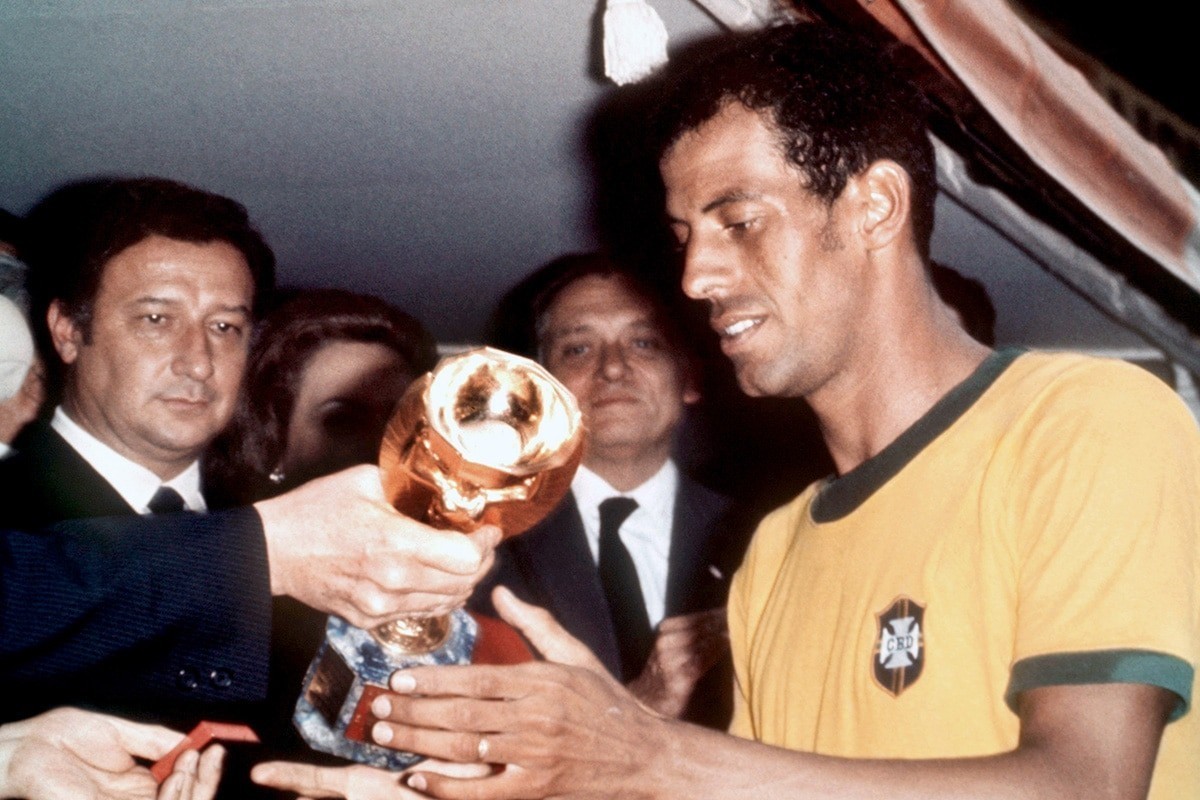 Mexico 1970 was to be the tournament which would provide Carlos Alberto with his greatest achievement. It would also mean he was immortalised, thanks to the many famous images of him holding aloft the Jules Rimet trophy after Brazil secured the cup for good after an impressive victory over Italy in the final at the Azteca Stadium.

And his goal in the final that year is considered by many to be the greatest ever scored in the World Cup. Starting just five yards from Brazil’s own penalty area and after a total of eight Brazil players touched the ball, Pele then provided the final pass for Alberto to charge forward and strike the ball into the corner of the net.

At the end of that match, the 25-year-old Carlos Alberto became the last captain to get his hands on the famous Jules Rimet trophy — having won it three times Brazil had earned the right to keep it and it was replaced with the World Cup which is still in use today.

As it was, 1970 would prove to be the only time Carlos Alberto would play at the highest level as a persistent knee injury put paid to his chances four years later in Germany. When he eventually regained match fitness, his speed was no longer there; but his ability to read the game was, and a move to centre back meant he would eventually warrant a recall to the national team.

With plenty still to offer he returned to Fluminense in 1974 and helped the team capture two consecutive Campeonato Carioca championships, before moving to Fluminense's arch-rivals Flamengo in 1977 for a brief and largely unsuccessful spell.

And his form meant he would once again be called up to play for his country, this time by Claudio Coutinho, who asked him to captain the national team in the qualifiers for the 1978 World Cup. Despite not having played a competitive international for almost seven years he certainly didn't disgrace himself, but after three games and at the age of 33 he decided enough was enough and finally retired from international football. 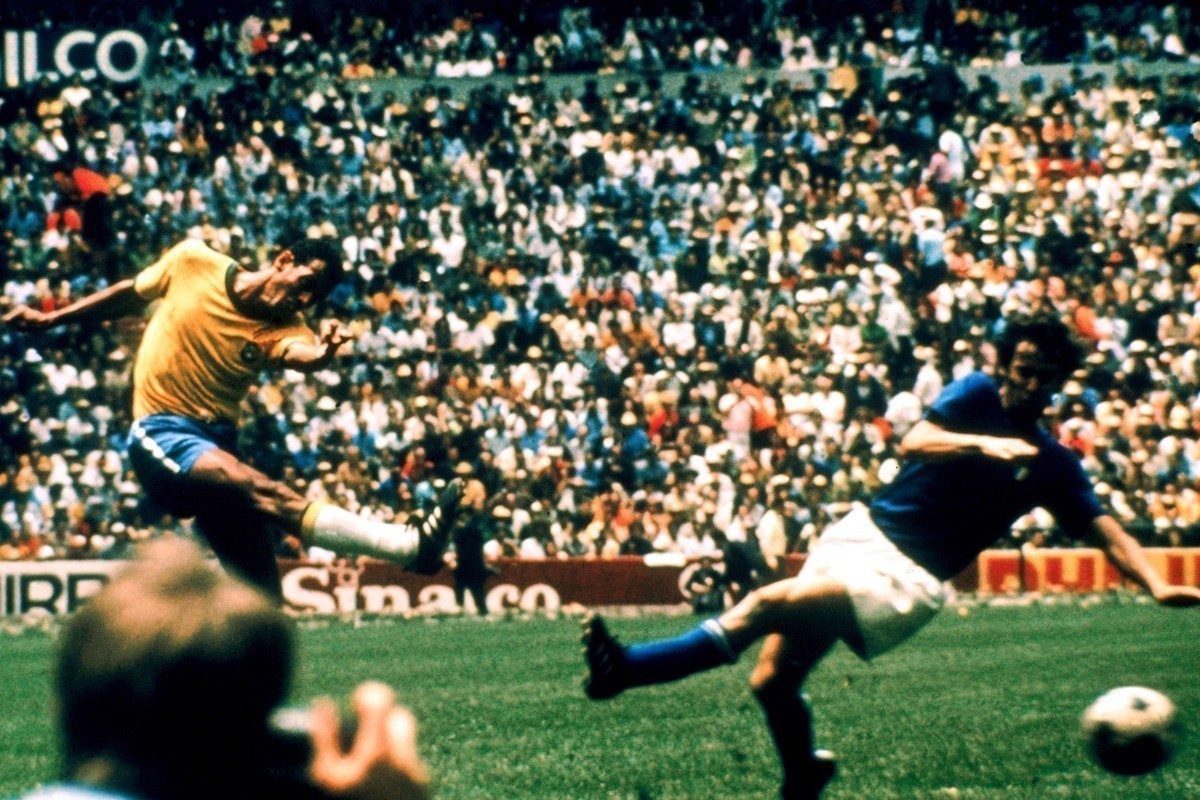 Alberto was still hungry and was eventually lured to America as one of many great players who couldn’t resist the glitz, glamour and ultimately money on offer in the North American Soccer League. Joining the New York Cosmos he was reunited with his former teammate and good friend Pele, as the duo won two consecutive NASL titles in 1977 and 1978.

Carlos was one of the few big names who embraced the NASL at a time when American soccer was seen as something of a grave yard for former greats and he was rewarded for his efforts. And he certainly made the most of it.

Following just a year with the California Surf, he returned to the Cosmos in 1982 where he won his third NASL title before finally bringing the curtain down on his career for good. In 135 games in the States, Carlos scored a total of 8 goals and was an NASL All-Star five times.

Not content to rest on his laurels he returned to Brazil and tried his hand at coaching, leading Flamengo to the Brazilian first division title in 1983 and Fluminense to the Rio de Janeiro state championship in 1984. But, in truth, his managerial career was a troubled one and these were the only highlights. He soon became something of a journeyman, not quite able to emulate the great success and achievements he enjoyed as a player.

His most recent role in the game came as a TV pundit and commentator where players, managers, owners and chairman all faced his wrath on a regular basis as he lamented what he saw as the demise of Brazilian football in recent years, making his shows compelling viewing.

But it was while wearing the famous yellow shirt of Brazil that Carlos Alberto made his greatest impression on the game, particularly in the grainy footage which was broadcast to every corner of the world from Mexico City on June 21st 1970 of THAT goal in THAT World Cup final win over Italy; for which he will always be remembered.