West Ham United look to get their Premier League campaign back on track when they host Brighton & Hove Albion at the London Stadium on Friday night.

The Hammers have endured a mixed bag of results recently, with their last three games producing a defeat to Tottenham Hotspur, a win over Swansea City and a draw against Burnley.

With just two wins in eight games this season, West Ham are languishing in 15th, just two points above the relegation zone, and will hope to capitalise on home advantage against the Seagulls – ahead of the Hammers on goal difference in 14th – to clinch three much-needed points.

Although the draw against Burnley led to some negative talking points (Andy Carroll's red card, Marko Arnautović's poor form and conceding a late equaliser), the return of Pedro Obiang gave the Hammers supporters something to cling on to.

The 25-year-old replaced Arnautović at half-time and introduced a sense of measure and control to the midfield. After coming on, Obiang impressed by winning six duels, completing both of his attempted dribbles, winning two tackles and two aerial duels.

Operating alongside Cheikhou Kouyaté in the centre, the former Sampdoria midfielder, making his first appearance in a month, immediately staked his claim to be installed into the first-team.

A muscular injury kept Obiang out for four weeks but, prior to that, he had been one of the more consistent Hammers this season. In his last game before the injury, Obiang was the man of the match against Huddersfield Town.

In that game, he was an imperious presence in midfield, winning four tackles, making two interceptions and winning ten duels while also scoring the opening goal, a deflected effort to finally break Huddersfield's resistance in the 72nd-minute.

Obiang brings a dynamism and aggression to West Ham's midfield and, with Mark Noble currently out of favour, he looks like the best option to operate alongside Kouyate in the centre.

Last season, Obiang was one of the league's most effective ball-winners. He had a higher tackle success rate than N'Golo Kanté with his 89 per cent comfortably eclipsing the Frenchman's 66 per cent.

In fact, only Everton's Idrissa Gueye had a higher average than Obiang, so you can certainly see where his strengths lie.

For the visit of Brighton, Bilić may well give Obiang a starting berth after his impressive 45 minutes against the Clarets. Tactically, it makes sense. West Ham have defended well in recent games deploying a back four, so that is likely to remain unchanged with Pablo Zabaleta, Winston Reid, José Fonte and Aaron Cresswell in front of Joe Hart.

In midfield, the most attractive options would seem to be Kouyaté alongside Obiang, with Lanzini in the most advanced position. Given something of a free role as the furthest forward in the midfield trio, Lanzini can influence the game in the final third with his creativity. Carroll's red card against Burnley stifled Lanzini, as the Hammers were forced to sit deeper and protect their 1-0 lead.

However, in a home game against a team who have shipped ten goals already this season, Lanzini will be expected to play a much more prominent role in an attacking sense, feeding Hernández while linking up with Michail Antonio and Arnautović, if the Austrian keeps his place.

And Obiang can be the key to unlock Lanzini. In the screenshot below, you can see Obiang's base position during the Huddersfield game (number 14). He is slightly deeper than Kouyate (8) as he allowed the Senegalese midfielder to make those driving runs forward and support the attack. 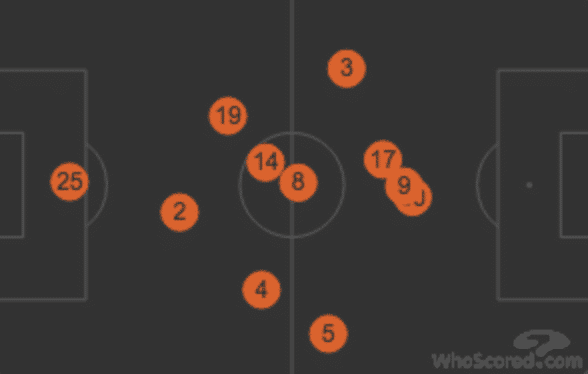 Having Obiang screening as the dedicated defensive component in midfield will allow Lanzini to push higher up the pitch and support Hernández.

The Spaniard can also be effective when he is allowed to roam forward. We saw it against Burnley when he played a central part in West Ham's best move of the match.

Hernández started on the right, cutting inside before finding Obiang. The former Sampdoria midfielder found Hernández with a neat back-heel. The Mexican laid it off to Lanzini, who returned the favour with a crisp, perfectly-weighted pass. Hernández picked out Antonio, who forced a save from Tom Heaton.

The move showcased Lanzini's deft passing, Hernández's willingness to drive into the heart of the opponent's defence and Obiang's smooth touch and awareness to keep the move ticking.

Although he can be used as the deepest-lying midfielder with a predominantly defensive remit, he is an astute link in the play, something Bilić will hope to see on Friday night.

Obiang has the energy and ability to fulfil both defensive and attacking roles, but Bilić may not want to overstretch the Spaniard given that he is just back from injury.

The more likely outcome is that Kouyaté will be instructed to influence the game further up the pitch when West Ham are attacking, with Obiang operating in the holding role.

With a possible switch to a 4-3-3, West Ham fans will have reason to be optimistic about the chances of seeing a vintage performance, with Lanzini able to express himself in an attacking sense now he has security in Obiang and Kouyaté.

The former is certainly an important player for the Hammers. Keeping him – and indeed Lanazini – fit will be crucial if they are to climb back up the table this season.