OB and Midtjylland go in search of their first win of the new season on Friday night after both sides only managed to pick up a solitary point from their opening two fixtures. The visitors head into this game as the bookmaker's slight favourites to win but neither side have shown anything so far that suggests they have the confidence to secure all 3pts on Friday.

There is a good chance that we will be treated to goals at both ends of the pitch on Friday as four of the last five meetings between these two clubs have ended the very same way. Four of OB's last five matches in all competitions have witnessed goals being scored by both teams while each of Midtjylland's last six matches have failed to produce a clean sheet for either side, adding further weight to our first prediction for Friday's clash.

Recent meetings between these two clubs and their performances in pre-season and the Superliga so far suggest that there could be at least three goals scored on Friday. Five of the last six encounters between OB and Midtjylland have produced over 2.5 goals, including their last encounter, a pre-season friendly last month that ended 3-2 to Midtjylland. Four of OB's last five games have witnessed at least three goals scored, while four of Midtjylland's last six outings have ended the same way.

Everything you need to know about OB vs Midtjylland

OB made the trip to Randers last time out where a promising first-half display suggested that the visitors should have secured their first victory. Goals from Kadrii and Horneman put OB 2-0 up at the break but Randers scored twice in three second-half minutes to rescue a share of the spoils.

Midtjylland might have been hoping to get their first win on the board at home to Silkeborg last weekend but the hosts were outplayed by their guests. Silkeborg took the lead after 31-minutes and lead at the interval. Midtjylland equalised early in the second forty-five through Dreyer but soon found themselves a goal down again when Klynge scored for the visitors. Shortly after going 2-1 up, Silkeborg hit the decisive blow, making it 3-1 through Helenius to which Midtjylland had no reply.

OB: Mihajlo Ivancevic, Issam Jebali, Max Fenger and Emmanuel Sabbi could all miss out on Friday through injury.

Midtjylland: Júnior Brumado is back in training but the trip to OB might have come too soon. 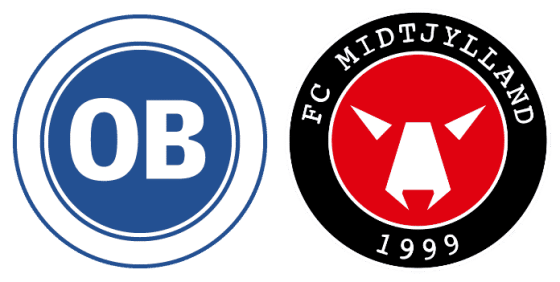