Nottingham Forest steadied the ship with a draw at the weekend after losing their first match under Steve Cooper last week. Can they get back to winning ways here? Find out with our Nottingham Forest vs Sheffield United match preview with free tips, predictions and odds mentioned along the way.

First up in our predictions is the match result market and we're opting for a home win, which looks great value in respect of the odds. Nottingham Forest have only lost one match since sorting ways with Chris Hughton and that came against Fulham, who are capable of beating anyone. They showed the ability to bounce back from adversity too by drawing with QPR at the weekend. Sheffield United meanwhile were losing to Blackpool meaning they have lost three of their last five matches. The Blades haven't won at the City Ground since 2008 either.

Goals will be seen

Where the total goals market is concerned we are expecting a fair few goals to hit the net hence our over 2.5 tip. Both Nottingham Forest and Sheffield United have seen four of their last five matches end north of the 2.5 mark. Coincidentally, they've also both seen the same number of total goals (15) across those five fixtures; that gives Forest and Sheffield United a game average of 3.0 goals per game. It all points to a game that should be a good one for the neutral.

Both teams to net

Our final prediction for this game is that both teams contribute to the scoring. Nottingham Forest have seen both teams find the net in three of their last five games whilst Sheffield United can say that about four of their past five outings. The last three head to heads played at Nottingham Forest's stadium have only seen one game end with a nil in the score line as well.

Find the best odds for Nottingham Forest vs Sheffield United

Nottingham Forest showed great character to find a late leveller on Saturday off the back of a heavy defeat in midweek. That goal came courtesy of Jack Colback; he'll be hoping for more game time now and his tenacity wouldn't go amiss in the Championship. Defender Loic Mbe Soh could be available for selection too. Sheffield United are just huffing and puffing without turning out anything consistent; they've not had back to back wins since January and even then one was a cup match against lower league opposition. They've got some big players out injured but, even so, they need to be doing better. 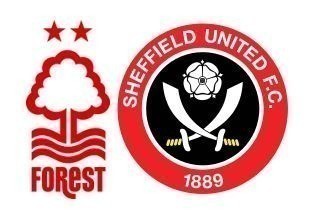