Nottingham Forest vs Reading: Check out our betting tips

Nottingham Forest's playoff ambitions are hanging by a thread whilst Reading are in big danger of relegation. Both need the points but only one can take all three. Who will? Find out with our Nottingham Forest vs Reading match preview with free tips, predictions and odds mentioned along the way.

The league table has Nottingham Forest sitting some way ahead of relegation threatened Reading and the recent form suggests that there is a gulf in quality too. Reading had shown signs of improvement but it proved a rather brief “pick me up” as they're now coming into this game off the back of two straight defeats. Nottingham Forest meanwhile are unbeaten in seven having won four – three of which were at home – and drawn three – two of which were away. With everything considered, it's hard to look past a Forest victory.

When it comes to the total goals market for this game there is only one bet to place – over 2.5. Nottingham Forest have seen four of their last five go north of the 2.5 mark with a game average of 3.4 goals. Reading's away form is also filled with goals. Again, four of their last five road games have gone over 2.5 and, strangely, their game average washes through at 3.4 goals per game as well. Goals should await.

These teams are both having seasons to remember but they're not for the same reasons. Nottingham Forest have made the quarter final of the cup and are in a playoff race. Reading have been deducted points and could drop into the third tier.

Nottingham Forest sit in mid table but know a game in hand victory would change that. Until they can catch up with those around them, they need to at least keep pace. With Reading visiting, they should do exactly that.

Reading had a little run of form as they avoided defeat in three consecutive games but that's long gone now with consecutive losses recorded. That seven points from nine might, along with bang average form, see them through to safety but a win here would almost kill the spirit of the chasing pack. 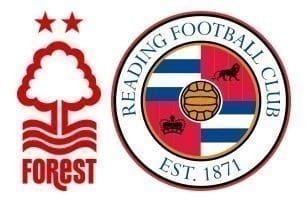