Of all the teams in the bottom three Peterborough are most likely to escape the drop. Can they win here to keep that dream alive? Find out with our Peterborough vs Nottingham Forest match preview with free tips, predictions and odds mentioned along the way.

Peterborough might have shown some fight recently but we think they'll lose this match. Nottingham Forest are not only a team in form but, with their position of fifth in the table, they also have plenty still to play for and that means they can't let up. When you fa for that into the respective form of both teams it's hard to see anything but an away win; Peterborough have won just two of their last 10 home games whilst Forest have recorded seven wins in their last 10 matches. Nottingham Forest have also won the last four meetings between these sides.

We might be backing Nottingham Forest to win this match but we believe Peterborough will put up a fight about things. The Posh have shown some glimpses of what they can do in recent games and, as a result, have scored goals in each of their last four matches. Nottingham Forest meanwhile have found the net in four of their last five games. With that considered, it wouldn't be a huge shock to see goals at both ends.

Peterborough vs Nottingham Forest: Let's look at the predicted lineups

It's not inconceivable that neither of these teams are in the Championship next year. Peterborough are in serious danger of dropping back to League One and Nottingham Forest will be in the playoffs barring a complete collapse; from there on out, it's a lottery as to who goes up.

Peterborough have shown more in the last few weeks than they have all season; it is as though they've only now started to believe they can compete at this level. With a fair few points to make up, it may well be too little too late but a win here really would get fans on edge.

Nottingham Forest can mathematically make the automatic promotion places. In reality they won't. The good news for Forest fans is that they're in really good form right now, which means they have a solid chance of winning the playoffs assuming the wheels don't come off in their last few games. Anything but a win here could see some doubts come into the group.

A quickfire FAQ on Peterborough vs Nottingham Forest 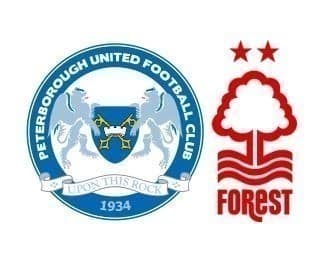