Nottingham Forest have got a fantastic chance to break into the top six but they can't afford to many slip ups. Will they avoid one here? Find out with our Nottingham Forest vs Coventry match preview with free tips, predictions and odds mentioned along the way.

Nottingham Forest vs Coventry: Let's look at the predicted lineups

If you're a glass half full kind of person then both of these teams have some chance of making the playoffs. For Nottingham Forest the chances look strong. For Coventry, they'll be dead if they lose this game.

Nottingham Forest rebounded from their FA Cup loss to Liverpool with an impressive 4:1 win at Blackpool; they have now won their last three league games, and have no losses in their last eight league games. Steve Cooper's men will host Coventry on Wednesday; they'll be eyeing their fourth consecutive win in the Championship.

Coventry have struggled a lot in recent weeks; they have no wins in their last three games, and they won just one of their last seven games. Mark Robin's men will hope to right their wrongs as they visit City Ground.

A quickfire FAQ on Nottingham Forest vs Coventry 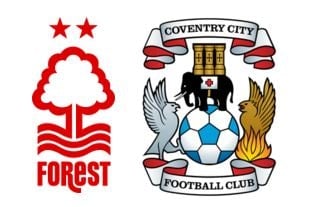