Nottingham Forest are rooted to the foot of the Championship table with just one point from five games. Can they grab their first win of the season when Cardiff come to town? Find out with our Nottingham Forest vs Cardiff match preview with free tips, predictions and odds mentioned along the way.

Nottingham Forest have struggled massively so far this season. They've taken just one point from an available 15 and they've been eliminated from the League Cup too. Cardiff meanwhile had started the campaign well; they have, however, lost their last two on the spin albeit one was a cup match. The reason we think they'll have too much for Nottingham Forest is because the Bluebirds have a habit of doing the simple things well and always pose a threat in the opposition box. Forest can't say that about themselves right now; it will prove the difference.

If you look at recent form then you might argue that this game will go over 2.5 goals. We're making the prediction that it won't though. Nottingham Forest have gone over 2.5 in three of their last five games but, equally, two of the last three have been south of that all important cut off mark. Cardiff have also seen two of their last five come in south of 2.5. We know these aren't particularly convincing stats but they're not totally the other way and then you have the head to head record to factor in; the last five meetings have all been under 2.5 as have eight of the last 10. That's where your value is!

Our final tip is backing the 6'5 Kieffer Moore to score in the match. Moore has only notched once this season but will be a huge threat in the box particularly with how much pressure Cardiff will put Nottingham Forest under from set pieces. On top of that, he's been forced to self-isolate during the international break after coming into close contact with Adam Davies; that's bad news for Wales but great news for Mick McCarthy as it means he'll be fit and raring to go come Saturday.

The best odds for Nottingham Forest vs Cardiff

Forest fans to keep on frowning as their team lose again

Nottingham Forest's rubbish start to the season needs to turn soon with manager Chris Hughton likely to come under enormous pressure. They'll need to stand up and be counted in this game so Jack Colback could have a big influence given his experience. The reason Forest need to stand up and be counted is because you can guarantee Cardiff will. They'll also arrive with quality in the final third. Our goal scorer tip, Kieffer Moore, is one man whilst fellow Welsh international Mark Harris might come into McCarthy's thinking. 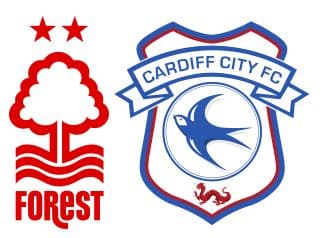