Nottingham Forest are yet to win a game in the league this season whilst Blackburn are unbeaten. Will that change here? Find out with our Nottingham Forest vs Blackburn match preview with free tips, predictions and odds mentioned along the way.

The first of our tips is for the match to end as a draw. Nottingham Forest were the draw specialists of the Championship last year; they had the second most draws in the league. What they'd give for a draw now having lost their opening two matches! As for Blackburn, they're unbeaten in the league but have drawn three of their previous five in all competitions. The head to head record makes good reading too for this bet; four of 10 have ended level with no more than one goal in the other six. Of course, you've then got the here and now to worry about; for Nottingham Forest, a draw would end their losing start. As for Blackburn, it prolongs their unbeaten start and an away point is never a bad result.

There will be plenty of goals

Just because we're making the prediction of a draw nobody mentioned a bore draw. It won't be that. Both Nottingham Forest have surpassed the 2.5 mark in each of their previous four games and have a game average of 3.25 in that time. Blackburn have come up short of the 2.5 cut off once in their last four; the game average is still pretty strong though at 3.0. Two of the last three meetings between the pair at the City Ground have seen north of 2.5 as well.

Both team to bang in goals

The best odds for Nottingham Forest vs Blackburn

A hard fought game to end all square

Last season Nottingham Forest had the best defence outside of the playoff places. That's has evaporated at the start of this campaign and will be a huge concern for Chris Hughton with his side having lost two from two. Injuries aren't exactly helping though with Loic Mbe Soh and Joe Worrall likely to miss out on Wednesday. One boost is the return of Lewis Grabban at the top end of the pitch. For Blackburn, they've started the season very well with four points from six. Even with Adam Armstrong having moved on they still carry a goal threat too with Ben Brereton Diaz relishing the prospect of being main man. 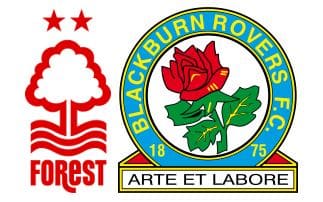