Norwich sit bottom of the Premier League table without a single win from their opening 9 matches. This Sunday, Leeds provide the opposition and they too are a side that have endured a tough start to the campaign and hover just above the relegation places.

Here are our predictions for Norwich vs Leeds.

We're expecting a tight and tense 90-minutes on Sunday between two teams that are desperate to find their form. Three of Norwich's last four games have produced under 2.5 goals and while the Canaries conceded 7-goals in their last game, we're expecting a response from the hosts this weekend. Under 2.5 goals have also been scored, or not scored, in five of Leeds' last six matches and the visitors arrive without their main striker Patrick Bamford who is injured.

In terms of a final scoreline, we believe that this game has the potential to end goalless. Norwich have trouble scoring goals, netting once in their last six outings, and Leeds have failed to score in each of their last three away games in all competitions. With both teams low on confidence, we can see this match being really tight, tense and probably not one that will live long in the memory.

Can one of these struggling sides raise their game and secure a much-needed victory?

Norwich made the trip to Chelsea last weekend where they would have expected to lose but perhaps not by 7-goals. Chelsea controlled the game from start to finish and went in at the break 3-goals to the good. The hosts added a further 4-goals in the second forty-five and Mount walked away with the match ball after completing his hat trick in stoppage time. Norwich look destined to go down as they don't score enough goals and concede far too many at the other end of the pitch.

Leeds played host to in-from Wolves last time out and managed to come away with a point, despite going 1-0 down in the 10th-minute. A dramatic stoppage-time penalty handed Rodrigo the chance to salvage a point for the home side, just when Wolves looked to have done enough to win the game, and the Spaniard colly converted from 12-yards to make it 1-1. Leeds just can't seem to find that winning formula and will be hoping a visit to the division's bottom club proves more fruitful this weekend.

Leeds: Robin Koch, Luke Ayling, Junior Firpo, Raphinha, Jamie Shackleton and Patrick Bamford could all miss the trip to Norwich due to injury. 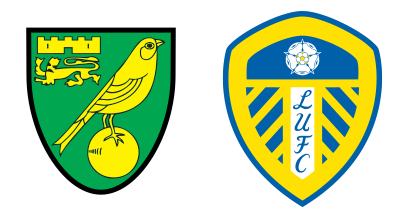