Norwich vs Crystal Palace: The Predictions

Norwich are enjoying their best run of form this season and will be looking to put some more distance between themselves and the relegation places when they play host to Crystal Palace in the Premier League this Wednesday. The Eagles arrive having failed to win any of their last three league games but did hammer the Canaries 3-0 back in December.

Norwich head into this game as the form favorites with four wins from their last six matches in league and cup, and have the home advantage. Crystal Palace have failed to win any of their last three league games and both of their wins in their last five games have arrived in the FA Cup against lower-league opposition, so you can see why we're backing Norwich with a double chance bet.

All you need to know ahead of Norwich vs Crystal Palace

Norwich made the trip to Molineux at the weekend in the position of clear underdogs with the bookmakers despite winning their last two matches. However, a goal in first-half stoppage time from McLean proved enough for the Canaries to knock Wolves out of the FA Cup. Norwich look transformed since of late and genuinely look like they have what it takes to escape relegation, despite being touted as definites to go down not so long ago.

Crystal Palace progressed through to the 5th Round of the FA Cup at home against Hartlepool of League Two. Guehi put the home side in front after just 4-minutes and when Olise doubled the Eagle's lead in the 22nd-minute, there was no coming back for the visitors. Palace will be expecting a much tougher 90-minutes on Wednesday against a revitalised Norwich side and Vieira's men will have to be on their guard.

Norwich: Krul, Sorensen, Rupp, Omobamidele and Sargent are the main injury concerns for the hosts.

Crystal Palace: Zaha, Tomkins, McArthur and Kouyate are all doubts for the Eagles' midweek match. 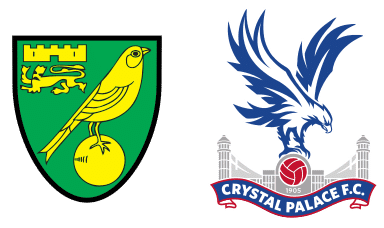