Norwich City host Wigan at Carrow Road in the Championship on Saturday, August 6th. Can the Canaries bounce back from an opening day defeat? Read our free predictions and find the latest odds for the fixture below in our detailed match preview.

Norwich are favourites to secure their first victory of the new campaign when they welcome Wigan to East Anglia on Saturday. Read our top predictions for this weekend’s fixture below.

Norwich marked their return to the Championship in uninspiring fashion when they lost 1-0 to Cardiff last week, though the Canaries look equipped to make home advantage count against Wigan on Saturday. Backed by the enthusiastic Carrow Road crowd, City should have energy to harness against a Latics side that failed to score in their first assignment of the campaign and a narrow home win could be on the cards here.

Both Norwich and Wigan failed to open their accounts for the new season last weekend in a 1-0 loss and 0-0 draw respectively. Neither side looked particularly fluid in attack in their tests against Cardiff and Preston, and a contest of few chances could develop when they lock horns at Carrow Road on Saturday. With that considered, bettors are advised to back under 2.5 goals to hit the net in Norfolk.

Top Betting Odds and Stats for Norwich City vs Wigan

Check out our selection of the best stats for Saturday’s match below alongside a tool to help you choose the best odds.

Read all of the injury updates and team news Saturday’s Championship fixture between Norwich City and Wigan below.

Norwich have no fresh injury concerns to report this week, though experienced Scottish defender Grant Hanley, who was sent off against Cardiff City last time out, will miss this weekend's fixture through suspension. Canaries boss Dean Smith might be tempted to change things up in attack following his team's poor showing in Wales.

Wigan have a full squad to choose from this weekend and manager Leam Richardson could keep faith with the same players that earned a point against Preston last week. Jack Whatmough was withdrawn before half time against North End, though the defender should be available this weekend. 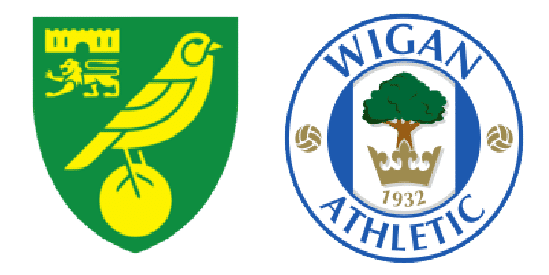 Who is Norwich City’s manager?

Dean Smith is in charge of Norwich having joined the club last November.