Norwich City’s opening game of the 2019/20 Premier League campaign was a baptism of fire.

A trip to Anfield isn’t the easiest place to start things – especially not as a newly promoted club – and Liverpool haven’t lost a league match at home since April 2017.

As the half-time whistle went the scoreline read 4-0. Jürgen Klopp’s side attacked at will and on another day they could’ve headed into the break with an even greater lead.

Liverpool's advantage implied the hosts dominated but the truth is Norwich caused the Reds a number of issues and with more composed finished would’ve been off the mark in those opening 45 minutes.

Teemu Pukki was a nuisance, pressing the centre-backs and running the channels.

His selflessness created the first chance of the contest as he jumped on a poor Alisson pass to nip in ahead of Joe Gomez. The Finn attacked the space behind Trent Alexander-Arnold found Marco Stiepermann and the German fired the resulting effort over the bar.

That was one of five shots Daniel Farke’s men had inside the penalty area at Anfield.

Stiepermann wasted another good opportunity with nine minutes on the clock. Clever played in the middle third by Todd Cantwell freed Pukki and laid the ball off to the 28-year-old midfielder. Though on his favoured left foot, the Norwich No.18 wasn’t able to test Alisson.

Eventually, he did work the Liverpool keeper. A patient piece of Norwich possession culminated in Max Aarons and Emi Buendía linking up well down the right-hand side. The 22-year-old Argentine found Stiepermann who rifled a half-volley at goal from just outside the area. Alisson was equal to the effort and palmed it away.

The manner in which Norwich carved the home side open is something which has been overlooked by the masses. Farke was labelled as naive after the 4-1 humbling at Anfield – many pundits suggested the Canaries should’ve played a more conservative approach.

They wanted Norwich to go against what got them to the Premier League, adopt a style the players aren’t familiar with.

On paper, it would have shored up the side defensively and resulted in fewer goals. In reality, such a drastic change would’ve probably seen them taken apart. Anfield isn’t a place to test something out.

Furthermore, it isn’t as though Norwich played badly. The difference between the two sides was the hosts took their chances.

If Farke’s side perform as they did at Anfield throughout the season they’ll win more times than they lose.

During the 2018/19 campaign, Liverpool conceded the fewest number of goals in the top flight. Alisson made a difference but generally, the Reds didn't give up many chances. Against Norwich that normally solid defence looked human.

Farke and his players should take a lot of positives from this – especially their use of Stiepermann and Buendía.

The two attacking midfielders constantly found pockets of space after running off Gini Wijnaldum, Fabinho and Jordan Henderson. They joined Pukki in attack and the trio worked well together. 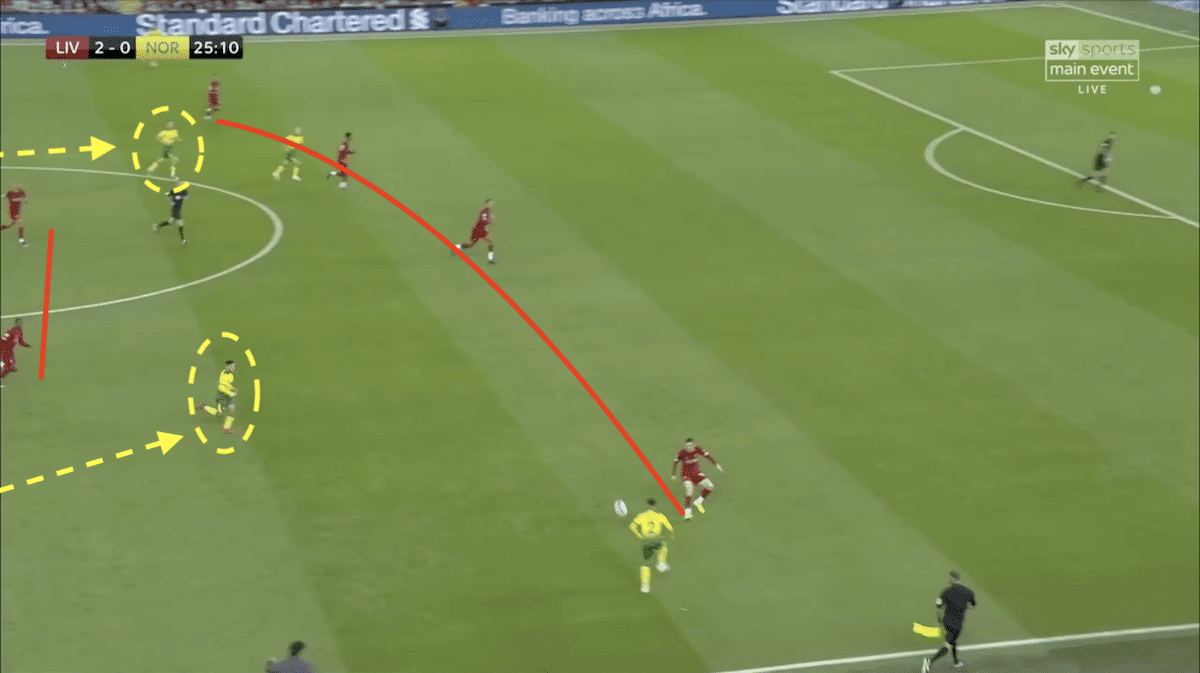 The picture above is just prior to Stiepermann putting Alisson to work. Norwich retained possession in their own defensive third and invited the Liverpool press before Aarons was picked out on the right with a long ball.

The away team bypassed the midfield and Stiepermann and Buendía have made runs either side of Wijnaldum and Fabinho.

With Liverpool set to press, their midfield couldn't cover the space in front of the defence. It's the exact area the two Norwich players have attacked. 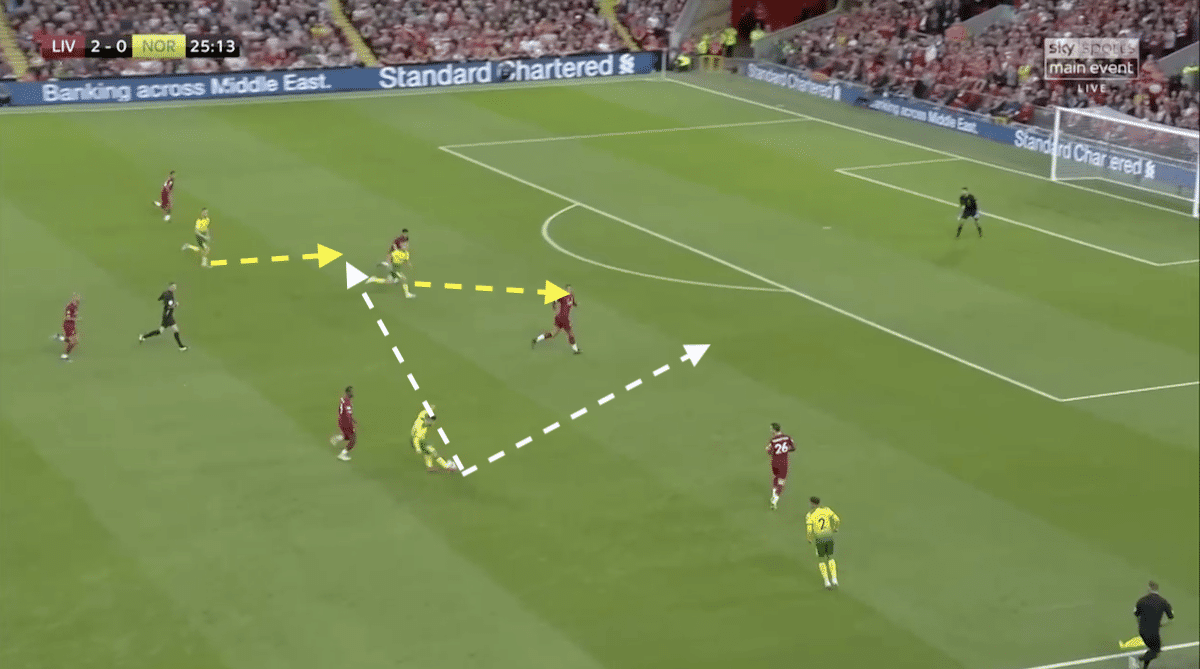 Stiepermann and Pukki collaborate to fashion out an opening in a good area. The one-time Celtic forward makes a run across the face of Joe Gomez which drags him out of position. This area is where the Norwich No.18 attacks having received an intelligent pass from the third amigo, Buendía. 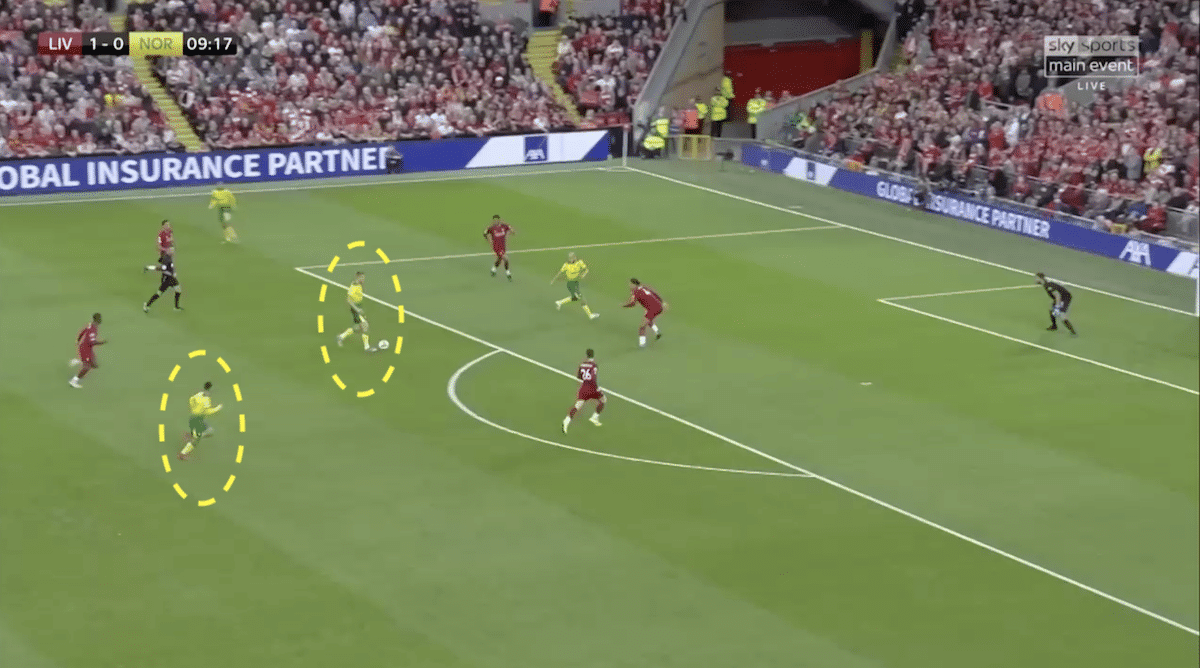 The trio linked up throughout the match. Above, Cantwell's turn took Fabinho out of the game and gave Norwich a clear run at the Liverpool defence.

Pukki found Stiepermann who continued his run into the area. Buendía is in support to his right which prevents Robertson from tucking inside as he has to keep an eye on the Norwich No.17. In turn, this allows the man in possession a bit more time and he's able to compose himself before shooting.

These are really good, well-worked chances against the team with one of the best defensive units in Europe.

Norwich should keep faith with what they're doing. So long as they're creating chances, it shows Farke's style is working.