Northern Ireland can't qualify for Qatar 2022 but a victory against Lithuania and a positive result in their final game against Italy could see them finish above Bulgaria in 3rd. Lithuania sit bottom of the group as things stand but victory on Friday would take them above Northern Ireland.

Here are our predictions for Northern Ireland vs Lithuania.

Northern Ireland have never lost to Lithuania before, picking up two wins and a draw from their three previous encounters. Two of those games have produced over 2.5 goals, including Northern Ireland's 4-1 win in Lithuania back in September. The hosts have picked up two wins and a draw from their last five international matches and over 2.5 goals were scored in their last game against Bulgaria. Lithuania have lost four of their last five outings and at least three goals have been scored in four of those fixtures.

We're only expecting the home side to score on Friday as Northern Ireland have kept two clean sheets in their last four games and they go up against a Lithuania side that have failed to score in three of their last four qualifiers. Northern Ireland have kept a clean sheet against Lituania before, back in 1993, and were so dominant in the pair's last encounter that we expect them to keep another one on Friday.

Josh Magennis is an experienced Northern Ireland forward with 63 caps and 8-goals for his country and with the likes of Lafferty, Laveryand Boyce missing out on selection, we're backing the Hull forward to score against Lithuania on Friday.

All you need to know ahead of Northern Ireland vs Lithuania

Northern Ireland made the trip to Bulgaria last month and lead at the interval thanks to a 35th-minute goal from Connor Washington. However, Bulgaria turned on the style in the second forty-five as Nedelev scored twice n the space of 10-minutes to turn this game on its head, to which, Northern Ireland could muster no response. That defeat ended any faint hopes Northern Ireland had of qualifying for the World Cup in Qatar and now they are merely playing for pride.

Lithuania welcomed Switzerland in their last qualifying match and ended up soundly beaten after a poor first-half display. The Swiss scored three times in the opening 45-minutes and added a fourth goal deep into second-half stoppage time to wrap up a comfortable 3pts. Lithuania have to win their last qualifying game against Northern Ireland to stand any chance of avoiding finishing bottom of the group and history suggests that is unlikely.

Northern Ireland: Michael Smith, Conor McLaughlin, Kyle Lafferty and Liam Boyce missed out on selection for one reason or another. 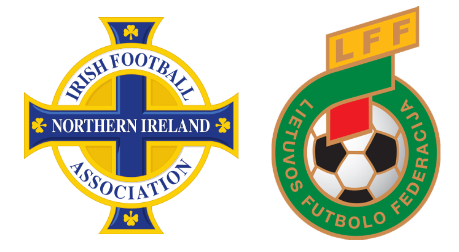