Northampton trail in this tie but do hold home advantage. Can their fans cheers them on to overturn their deficit? Find out with our Northampton vs Mansfield match preview with free tips, predictions and odds mentioned along the way.

Although Northampton lost their last game against Mansfield, that was their first loss in seven games; the Cobblers had four wins and two draws in six games before that loss. However, it's important to note that Northampton have not done too well against Mansfield in recent years; they won just one of their last eight encounters with Mansfield, with three draws and four losses. It's also fair to point out that Mansfield have no losses in their last five games; with this in mind, we believe that Mansfield will extend their unbeaten run to six games today.

Here are the key stats & form guide for Northampton vs Mansfield

Northampton vs Mansfield: Let's look at the predicted lineups

Northampton suffered absolute heartbreak on the final day of the season to miss out on automatic promotion and then lost the first leg of their playoff semi-final. Does their story have another chapter or have Mansfield written the end for them?

Northampton lost out on automatic promotion due to Bristol Rovers' 7:0 thumping of Scunthorpe on the last day of the regular season; although they finished with the same points and same goal difference, Bristol Rovers advanced because they scored more total goals. The Cobblers then suffered a 2:1 defeat at the hands of Mansfield in the first leg of their promotion playoff tie; they'll hope to overturn that deficit as Mansfield come visiting.

Mansfield are coming off a 2:1 win at Northampton in the reverse fixture of this clash; they are unbeaten in their last five games with three wins and two draws. The Stags will need to keep Northampton at bay if they intend to get to the promotion playoff final; they'll look to extend their unbeaten run to six games.

A quickfire FAQ on Northampton vs Mansfield 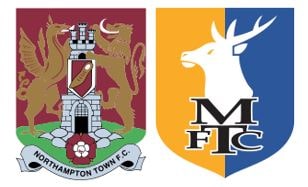