Ipswich players have been told to fight for their future at the club between now and May. Northampton players are fighting for survival. Who will win when the two teams meet? Find out with our Northampton vs Ipswich match preview with free tips, predictions and odds mentioned along the way.

Northampton vs Ipswich: Our top picks

Miles apart in the league but inseparable on the day?

A look at the league table might scream that Ipswich should win this game. The form book, however, suggests otherwise. Northampton have only drawn one of their last five at home, which was their last game at Sixfields. The three prior to that were all settled by the single goal though and all 1-0 in either direction. Ipswich meanwhile have drawn three of their last four on the road. There won't be much in the game with neither side likely to take the other apart and it's a game where the defences might come out on top.

We've literally just ended our first prediction with the phrase ‘the defences might come out on top'; it hardly screams goals. Let's back it up. Northampton are the lowest scorers in the league and Ipswich have a strong defensive record with just one goal per game conceded across the 41 matches they've played in the league this season. Going in the other direction, the Tractor Boys' record is the same; 41 goals scored. More recent evidence feeds the theory of a low scoring game further. Northampton have scored three in their last five games whilst Ipswich have netted just once in five away matches.

At least you can watch from home

If our tips to this point haven't alerted you to the fact this match is likely to be a thriller than a 0-0 score prediction might! It's a result Ipswich have managed to produce four times in their last six outings. Northampton haven't seen the 0-0 score line nearly as often but they have blanked five times in their last 10 at home. Ipswich, as touched on already, have blanked in four of five away fixtures. They last met on another in mid-February; the score was – drumroll please – 0-0.

Odds and more for Northampton vs Ipswich

A snoozefest on the horizon?

Ipswich might be wishing for the end of the season to arrive with wholesale changes expected but the same can't be said for Northampton; they'll be wanting the season to last for as long as it takes them to escape the drop. They'll have this game marked down as one they can get something from but three points will be a big, big ask.

Northampton vs Ipswich: A final rundown 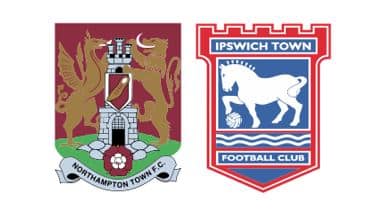