Whilst Premier League derby matches receive no end of build-up in the press, there remain plenty of fixtures that proceed with little fanfare at non-league level. Top-flight derbies in Manchester, Liverpool, Birmingham and London are all hotly anticipated, but there is only one derby in the UK that has been categorised by police as a ‘bubble’ fixture.

This non-league derby between Chester and Wrexham has such a history of violence that it is the only match in the UK to receive this label, which means that freedom of movement between rival sets of fans is severely restricted. The only way that supporters can gain entry to the ground is via official club coaches, having already purchased a match ticket well in advance of kick off.

Some fans claim that this controversial classification only serves to heighten tension. It was with that aim — and in hope of restoring the traditional 3pm kick-off time — that a 2015 petition named ‘reclaim the game’ was created in order to normalise this ‘bubble’ fixture. According to those who continue to advocate that campaign, the increased security measures only serve to intensify the atmosphere in these already emotive derby games.

But why has this categorisation been introduced in this particular fixture? The geographical proximity is an obvious factor. Although one is situated in Wales and one in England, the two are near neighbours, located just 12 miles apart. Chester’s Deva stadium lies so close to the Welsh border that not all of the stadium is in England, with it’s West Stand lying over the border in Wales.

The rivalry is clearly also heightened by a sense of national identity, as the two are not only distinguished by their respective clubs, but also represent England and Wales. Although they have a history of league football – having faced off in League Two just ten years ago – the teams now compete against each other in the National League. 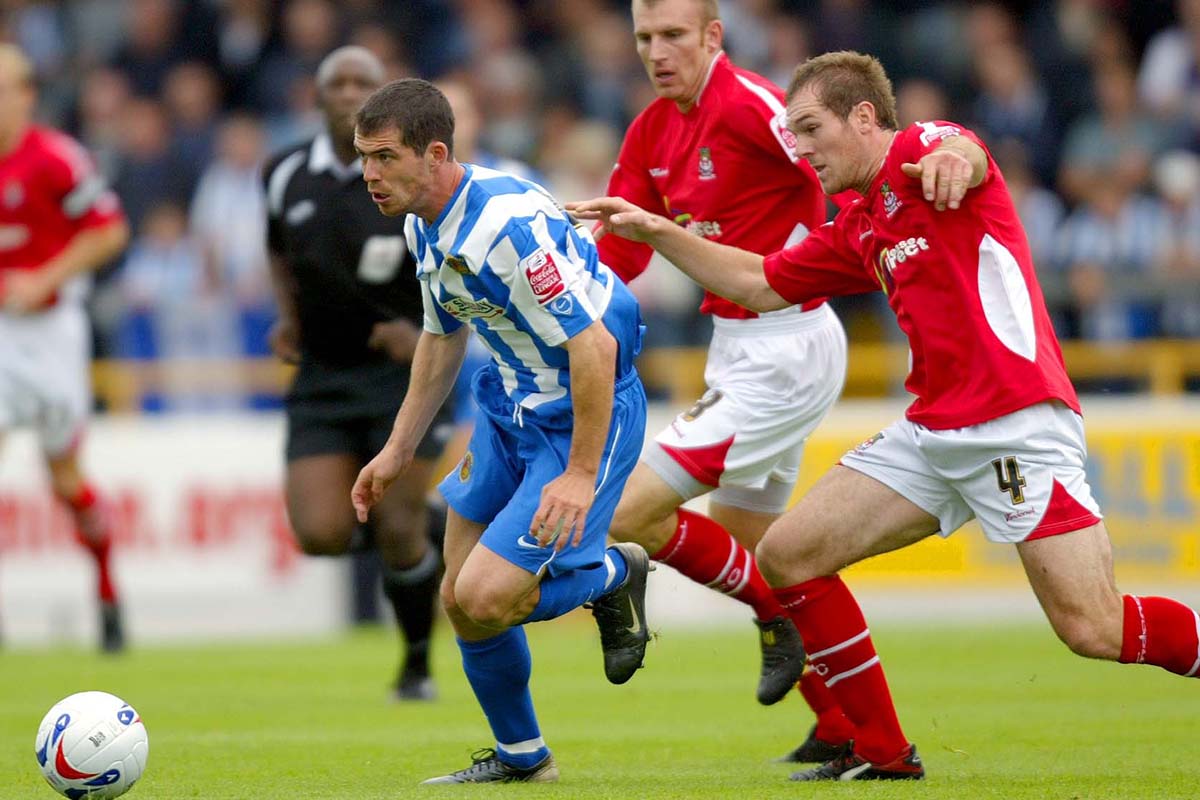 After respective draws against Bromley and Torquay this season, Chester and Wrexham occupied mid-table spots in England’s Football Conference, separated by just two points. Chester City had to be refounded as Chester FC in 2010-11 after the Blues received a winding up order just a few months earlier, and since then their record against bitter rivals Wrexham has been won three, drawn two and lost two.

Indeed, both clubs are now fan-owned, with the Dragons having been taken over by the Wrexham supporters club in 2011 following a statutory demand received from HMRC. The rebranded Chester FC are in the hands of City Fans United, their supporters trust. Despite their similarities, there is no solidarity in the deep-rooted bitterness that underpins the relationship between the two.

The socio-economic reasons for the hatred are highlighted by the differences between the two towns. The closing of coal mines under Margaret Thatcher hit Wrexham hard, and whilst the city has evolved and developed since then, the image of a poor mining town in contrast to historic Chester is stark. Tourism has always provided the Roman city of Chester with a boost, and the affluent city centre is lined with high-end restaurants and shops.

Fuelled by all the aforementioned factors, the rivalry was at its highest when it went hand-in-hand with football hooligan culture during the 1980s. There was city-wide trouble after a so-called friendly fixture in 1985 between the two sides, sparking riots between Wrexham’s hooligan firm Frontline and the 125’s of Chester.

Trouble has continued between the two sides, with both teams making cruel banners and chanting about tragic deaths of rival supporters and Chester fans faced sanctions for tearing up sections of Wrexham’s ground in March 2015.

This rivalry is nothing new, with the first match between the two played on 18 December 1888 as the Dragons beat Chester away from home in an FA Cup 4th round qualifier in front of 4,000 fans. An often-cited ancient Chester law even states that Welsh people can be shot with a bow and arrow when inside the city walls after midnight, but the vitriol inside the stadium is no laughing matter.

“It is an intense rivalry, especially for the supporters,” stated Ian Rush. “[They] want to win this game more than any other this season.” The iconic Liverpool talisman is in the unusual position of having played for both clubs, in addition to a brief managerial spell at Chester in the 2004-05 season.

“There are maybe five or six thousand fans there, but there may as well be 16,000 fans there because everyone is singing and you can see the passion in the faces,” he continued in an interview with the BBC in 2013.

The two sides will next meet on 21 January at Chester’s Deva Stadium. With both sides currently so close in the table, this non-league derby fixture shows no signs of cooling down just yet.