After another draw at home, their ninth of the season, this time 1-1 against Everton, Manchester United manager José Mourinho’s diffusion of responsibility began almost immediately.

“When the confidence levels are not high, the quality of performance is not easy to improve,” Mourinho said in his post-match press conference. “We had to go through a shortcut.

Mourinho certainly has a point: United’s attacking players have been incredibly wasteful in their finishing this season. No team has missed more “big chances” than the Red Devils (41), with top scorer Zlatan Ibrahimović accounting for a league-high 17 of those. They have also hit the woodwork more than any other side (18). 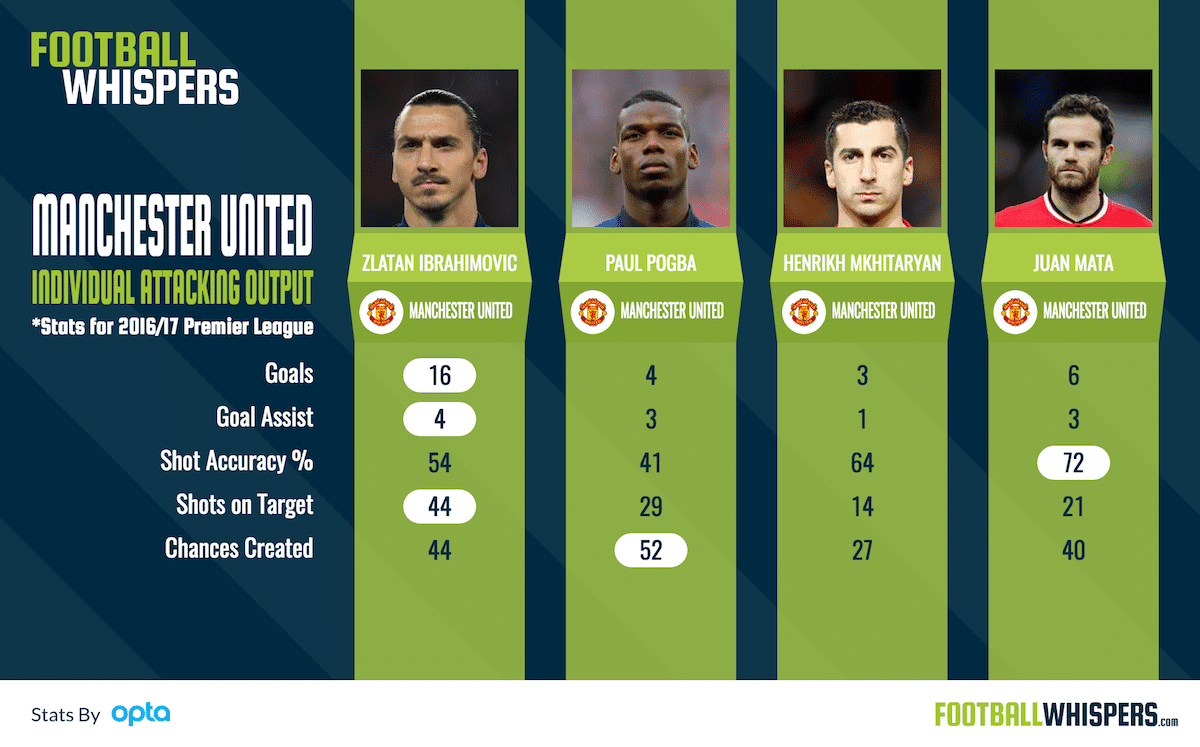 Only Liverpool can top United’s tally of 374 chances created, yet Mourinho’s men rank seventh in the division for goals scored and have found the net at home just 21 times in 16 games — a lower return than Watford, Bournemouth and Hull City.

The chances are being created but the players simply aren’t finishing them, right?

That is certainly true to an extent. United’s 8.6 per cent shot conversion rate is poor and sees them fall some way short of the likes of Chelsea (14.1 per cent), Liverpool (12.9 per cent) and Manchester City (12.3 per cent).

Furthermore, in the nine home games they have drawn this term – just one short of equaling the Premier League record for a single season – they have taken 172 shots. Fifty-five have been on target but just six goals have been scored, giving them a staggeringly unflattering conversion rate of 3.48 per cent. There is no doubt that United’s finishing has been bitterly disappointing.

But not all chances or shots are created equal. In the goalless draw with Burnley at Old Trafford back in October, the home side peppered the Clarets’ goal with 38 shots, 11 on target, many of which from well inside the penalty area. A mixture of failing to locate the very corners of the goal with these efforts and an inspired goalkeeping display from Tom Heaton conspired to keep the visitors’ sheet clean.

However, against Everton on Tuesday night and versus West Bromwich Albion three days earlier, United mustered a meagre total of six shots on target and only two from inside the penalty area – one of which being Ibrahimović’s equalising spot kick against the Toffees.

For the whole of the season so far, United have taken just 51.77 per cent of their total attempted shots from inside the penalty area, which again leaves them behind Liverpool (57.27), Chelsea (55.99 per cent) and City (55.01 per cent).

This shows that, while Mourinho’s men are aiming for goal regularly, they are not necessarily doing so from a position which gives them a high probability of scoring. So, rather than simply being a case of poor finishing holing them back, the 20-times champions’ ills in front of goal, especially at home, may also be systematic.

Unlike the division’s more free-scoring teams, United are not adept at working the ball into the penalty area to create openings. They are more reliant on strikes from distance.

Crossing has also been a key factor in the way the Red Devils have attacked this season, swinging a league-high average of 25.4 balls into the box per game – just shy of the 26.7 crosses per game that United made under David Moyes, for which the former Everton boss was roundly criticised.

Mourinho has always been respected for the way he is able to instil defensive organisation within the teams he coaches, doling out specified and detailed instructions to his backline and arranging his players in a way to offer protection to the defence.

In attack, however, his approach is far less prescriptive. The former Real Madrid and Inter Milan boss selects a strong line-up of attacking players and trusts them to intuitively break down the opposition.

By way of comparison, the pre-eminent coaches of the last few years – such as Pep Guardiola, Thomas Tuchel, Mauricio Pochettino, Jorge Sampaoli, Jürgen Klopp and Antonio Conte – all have a much more defined process laid out for how their team attacks.

Whether that be with the aim of creating overloads on one side of the pitch, using rapid circulation of the ball to destabilise an opponent, counter-pressing to recover possession in dangerous areas, working to the byline to generate cut-backs and attack second balls, or fluid and creative shifting of positions to exploit space.

For example, In Pep Confidential, Martí Perarnau’s inside account of Guardiola’s first season at Bayern Munich, the methods that the Catalan tactician used on the training pitch to drill the movement and ball circulation he required were well documented.

Guardiola had vertical lines painted onto the practice pitch and meticulously instructed his players to move precisely between the defined zones, always remaining in the optimal position to conjure an opening in the opponent’s defence, usually via the creation of overloads.

“The secret is to overload one side of the pitch so the opponent must tilt its own defence to cope,” Guardiola says in Pep Confidential. “When you’ve done that, we attack and score from the other side. That’s why you have to pass the ball with a clear intention. Draw in the opponent, then hit them with the sucker punch.”

This is a far more prescriptive approach to attacking than anything Mourinho employs. The Portuguese relies on his most creative players to solve the problems that they are presented with and, boasting the likes of Ibrahimović, Paul Pogba, Henrikh Mkhitaryan and Juan Mata among his charges, it is an approach that will work more often than it will fail.

Jose Mourinho currently has the worst home win rate of any Manchester United manager in the Premier League ? pic.twitter.com/49562kFGi3

But when any of these players are unavailable or have an off day, United struggle. It is also much easier for the opposition to stifle this kind of individualist approach than it is for them to thwart a well-oiled, fluid offensive unit.

When West Brom visited Old Trafford, they held a narrow defensive line on the edge of the penalty area, funnelled the home side’s possession out wide and backed themselves to win the aerial battle. Tony Pulis’ men came away with a point thanks to a 0-0 draw; their simple plan had worked to perfection.

Speaking of the difference in attacking coaching methodology between Mourinho and Conte, Eden Hazard told Sky Sports earlier this season: “In tactics and training we do more with Conte.

‘We work a lot of tactical positions and we know exactly what we have to do on the pitch, where I have to go and where the defenders have to go.

“We know exactly what to do. With Mourinho, he put in a system but we didn’t work lots.

“We know what to do because we play football, but maybe the automatisms were a little bit different.”

Without Barcelona or Bayern Munich levels of attacking talent, the kind of hands-off approach to attacking play Mourinho uses is far from failsafe and unlikely to sustain a title challenge.

Of course, there is an argument to be made that United’s players were under strict attacking instructions during Louis van Gaal’s reign and responded poorly. But the Dutchman’s possession-for-possession’s-sake style proved too ponderous and shackling for the modern English game; there is a balance to be struck which allows for individual expression within a coherent structure.

Mourinho isn’t wrong, per se, to point out that his attacking players are failing him, but perhaps he is failing himself to some degree by not instituting a system that will help his charges dismantle the resolute defences they are continually faced with.

The fact that this has not yet become part of his overall tactical toolkit, however, may be early evidence of how modern elite-level coaching has left Mourinho behind.

Three Ways Manchester United Could Line Up With Griezmann