Nigel Pearson's Watford honeymoon is well and truly over.

After picking up 14 points from his first seven Premier League games after succeeding Quique Sánchez Flores, your correspondent was among those eating humble pie.

A left-field appointment at the time, the former Leicester City boss had given the Hornets hope where it had been all but extinguished. However, throwing away six points in back-to-back games against Aston Villa and Everton was an unwelcome return to reality.

Saturday's 1-1 draw at Brighton & Hove Albion was another opportunity squandered, though Watford were wretched and offered next to nothing after going ahead through Abdoulaye Doucouré‘s rasping drive. From half time onwards, it was a matter of when, not if, the Seagulls would equalise.

And so they did, 12 minutes from the end with more than a little help from Adrian Mariappa. The full extent of the damage will not become apparent until relegation rivals Aston Villa and West Ham United play this weekend in the other half of the Premier League's ‘winter break'. Thankfully, teams at the bottom keep letting one another off the hook. 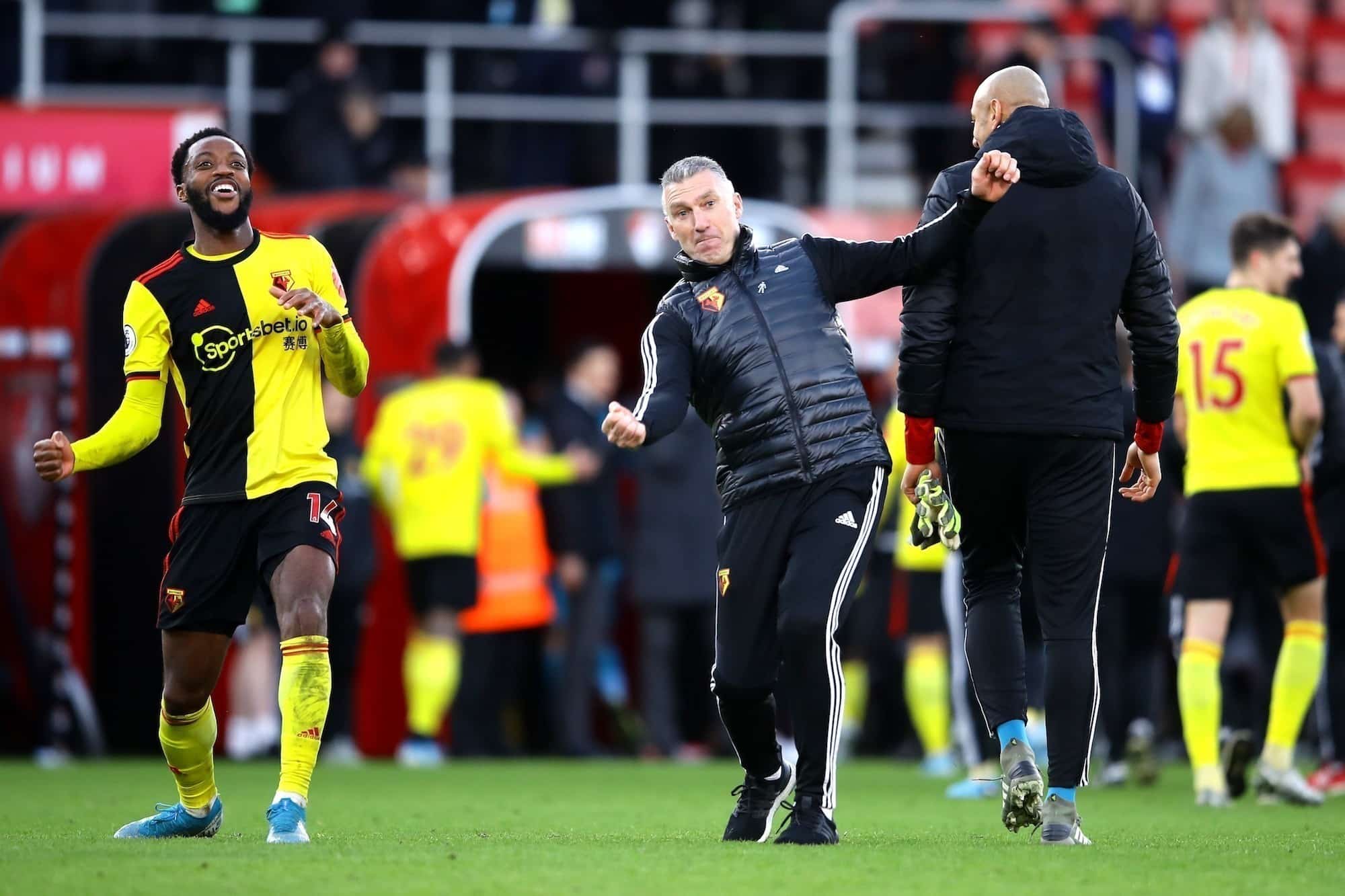 All is not lost. Far from it, in fact. The belief which had long since evaporated by the time Sánchez Flores' miserable second spell came to an end has returned. The Hornets are only a point behind 16th-place Villa – the boot could have been on the other foot had Pearson's side been able to cling onto their lead at Villa Park.

There are some lessons to be learnt though.

It's hard to imagine a straight talker like Pearson entertaining the notion of ifs and buts. Whichever you paint it, though, Watford should be on more points than they are. Even if they only held on to draw at Aston Villa and at home to Everton. That would be two more points than they currently have. The draw at the Amex was, on reflection, a point gained given Watford's second-half display.

Watford sat too deep, had no outlet and the substitutes came too late. Roberto Pereyra and Gerard Deulofeu had clearly waned long before being hooked in the 82nd and 86th minute respectively. Watford did not test Albion keeper Mat Ryan once in the second half, had just two shots in total and completed 97 passes.

Something has to change – and fast. The Hornets have failed miserably to hold onto leads and the feeling is their defensive approach has been to blame. There was certainly very little attacking intent against Brighton and while Pearson threw caution to the wind against ten-man Everton, it ultimately ended up coasting Watford.

It's not difficult to pinpoint the moment it all fell apart. With 15 minutes remaining at Villa Park and the score level at 1-1, Nathaniel Chalobah was withdrawn. On the face of it, bringing Argentine winger Ignacio Pussetto on was an attack-minded move.

It had the opposite effect.

Villa rallied and had four shots in the remaining time. Watford had one and completed just ten passes to Villa's 21 in the final third. The tide was one way and when Tyrone Mings deflected home Ezri Konsa's goal-bound effort, Villa would have felt they'd deserved it.

Refreshed by their break for the FA Cup, Watford roared into a two-goal lead at Everton only to concede two set-piece goals in a minute to hand the Toffees a route back into the game. All before half-time.

To the bemusement of most inside Vicarage Road, Chalobah's withdrawal came in the 57th minute. Pearson later confirmed the England international had been withdrawn as a precautionary measure. 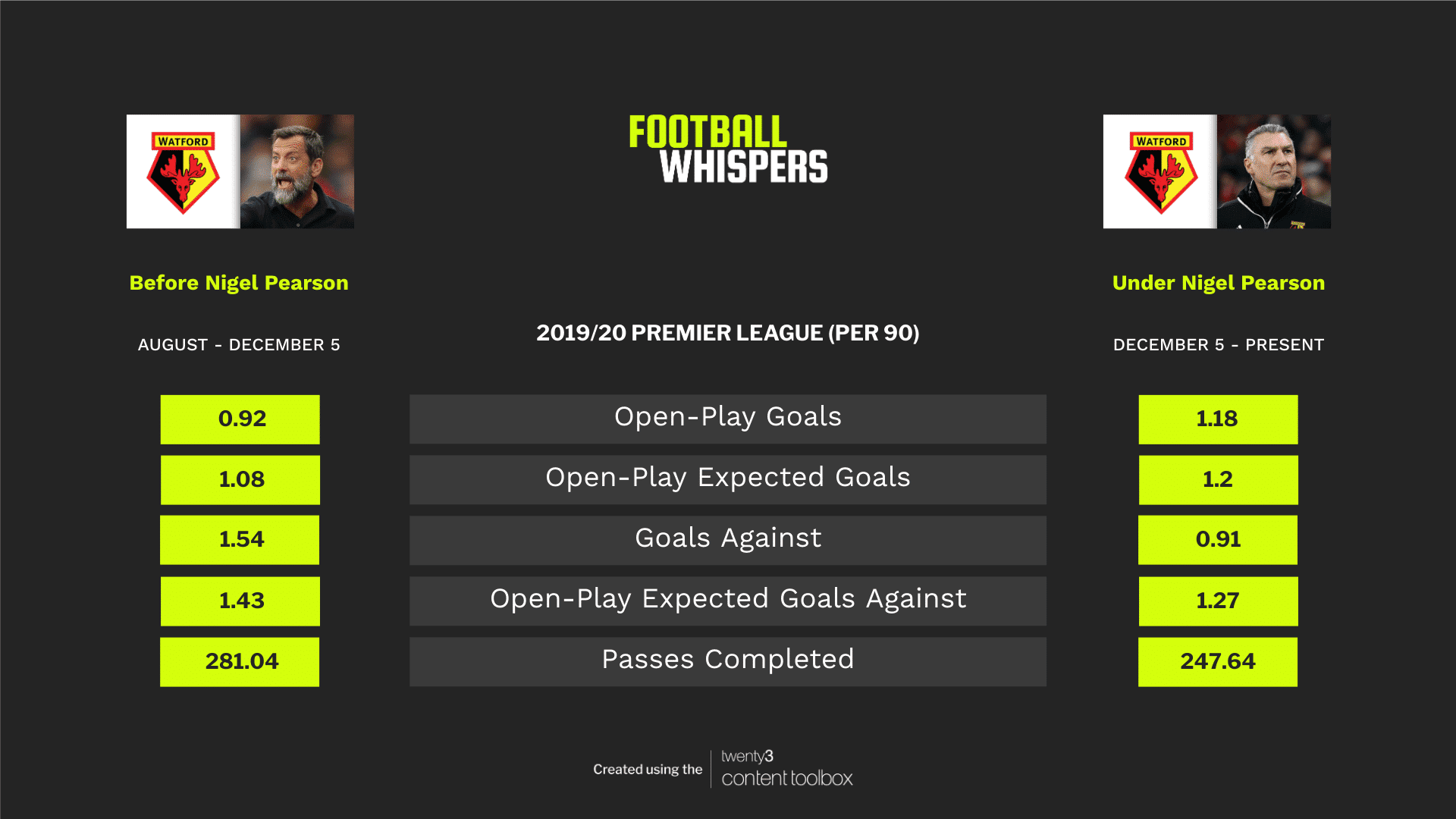 But Watford fell apart and despite managing five efforts, they failed to hit the target. Everton, who were down to ten men for the final 19 minutes, managed four. They hit the target once: Theo Walcott's stoppage-time winner.

Pearson could not have been accused of negativity in that instance. With his substitutes, he threw on Danny Welbeck, Isaac Success and Pussetto – three attackers. By the end, Watford were playing a kind of 4-2-4 with only Doucouré and Étienne Capoue holding the fort in midfield.

It was confused, disjointed and didn't pay off.

Make no mistake, Watford have tightened up defensively since Pearson was appointed. They're now conceding 0.91 goals (per 90) rather than the 1.54 prior to his appointment. However, that owes a considerable amount to the remarkable form of goalkeeper Ben Foster.

Their expected goals against per 90 (xGA 90) has Watford conceding 1.27 times per match. The fact they've bettered that figure is down to a combination of good goalkeeping and poor finishing from their opponents. But those factors cannot be relied upon.

Having sorted out his side's problems in front of goal – the Hornets are now scoring 1.18 times per 90 from open play rather than 0.77 under his predecessors – Pearson has to find a way to protect the overworked Foster. What hasn't helped are injuries to Kiko Femenía and Daryl Janmaat at right-back while Christian Kabasele has had to serve a suspension, robbing Pearson of one of his two first-choice central defenders.

One of the big successes of Pearson's tenure has been a change in the midfield composition. Saturday's goalscorer Doucouré had largely played at the based of midfield as part of a double pivot during his time at Vicarage Road. But Pearson has released the Frenchman to play further forward as a No.10 and was rewarded with a stunning solo strike against the Seagulls.

Taking his place alongside Capoue has been Will Hughes. The former Derby County midfielder returned to the starting XI following a spell in the treatment room and picked up where he left off, getting through untold amounts of defensive work in a deeper position.

Given his slight frame, it would be easy to mistake the 24-year-old for a more attack-minded midfielder. But as his three complete tackles – behind only Capoue (5) and Adam Masina (4) – prove, he is more than capable of playing a more defensively-minded role. His form is another triumph of Pearson's short reign.

The ultimate test of this relationship will be whether Pearson can keep the Hornets in the Premier League. There's enough there to suggest this marriage won't end in another divorce.