Nicolò Barella is one of the hottest prospects in Italy.

At just 21 years of age, he is now in his third full season of Serie A football with Cagliari, and his excellent form is reportedly attracting interest from Premier League clubs, with Chelsea, Manchester United, Liverpool and Tottenham Hotspur all linked

Following on from failure to reach the 2018 World Cup, Italy is in need of fresh talent and the dynamic midfielder is increasingly seen as an integral component in the country’s footballing future. However, considering the intensity of the recent transfer speculation, it is unclear how long he will stay in Sardinia for.

“Cagliari received offers and turned them down. I am happy to have remained with the club I support,” he said in an interview with La Gazzetta dello Sport. “If I had to choose between Serie A and the Premier League, I’d go for England, because I like the way they approach the game. Plus everyone there is just as irritable and prone to fouls as me!”

Born and raised in Cagliari, Barella came through the club’s youth academy before making his debut under the auspices of former Middlesbrough defender Gianluca Festa at the end of the 2014/15 season. Unfortunately, his introduction to the first team couldn’t halt their slide towards Serie B.

After the club’s relegation, he went out on loan to another second-tier side, Como, to gain more experience. Then, following Cagliari’s promotion back into Serie A in 2016, he became a regular starter under Massimo Rastelli’s tutelage.

In the two years since, Barella has established himself as a key player in central midfield, operating effectively in a number of different roles. Since Rolando Maran was appointed head coach over the summer, the youngster has played primarily on the side of a midfield diamond in a 4-3-1-2 system.

“I feel like a mezzala (the berth on the outside of a midfield three),” he said when asked to discuss his favourite position. “But I’ve also helped my team as a No.10 and a holding midfielder and did so with pleasure. It doesn’t matter where I play.”

After the recent draw with Milan, Maran spoke positively about Barella’s performance, focusing on the player’s tactical flexibility. “He is extraordinary,” the Cagliari coach said. “I put him as a playmaker in front of the defence towards the end and he didn’t put a foot wrong. He just gets better and better.”

This ability to play in any central midfield role illustrates the youngster’s versatility, something that explains interest from the likes of Tottenham, who switch systems from game to game and ask their midfielders to take up various different roles and responsibilities depending on the opponent.

While renowned for his aggression with and without the ball, Barella’s passing range and awareness came to the fore in the holding midfield role he occupied against Milan. With more time and space on the ball, he was able to pick out teammates over greater distances than he would normally do. However, his quality in build-up is visible even when he plays on the outside of a three.

He loves to drive inside laterally or diagonally from left to right with the ball at feet. In doing so he causes problems for the opposition, who must quickly pass marking duties on from player to player as he moves across the field. These moves regularly open up space behind the opponent’s midfield line which can be exploited with penetrating passes.

Alternately, if the line-breaking ball isn’t on, Barella’s movement infield gives him greater access to the far side of the pitch, including the right wing or inside channel. So, if he can’t go through the defensive block, he can spread play to help his team go around it. 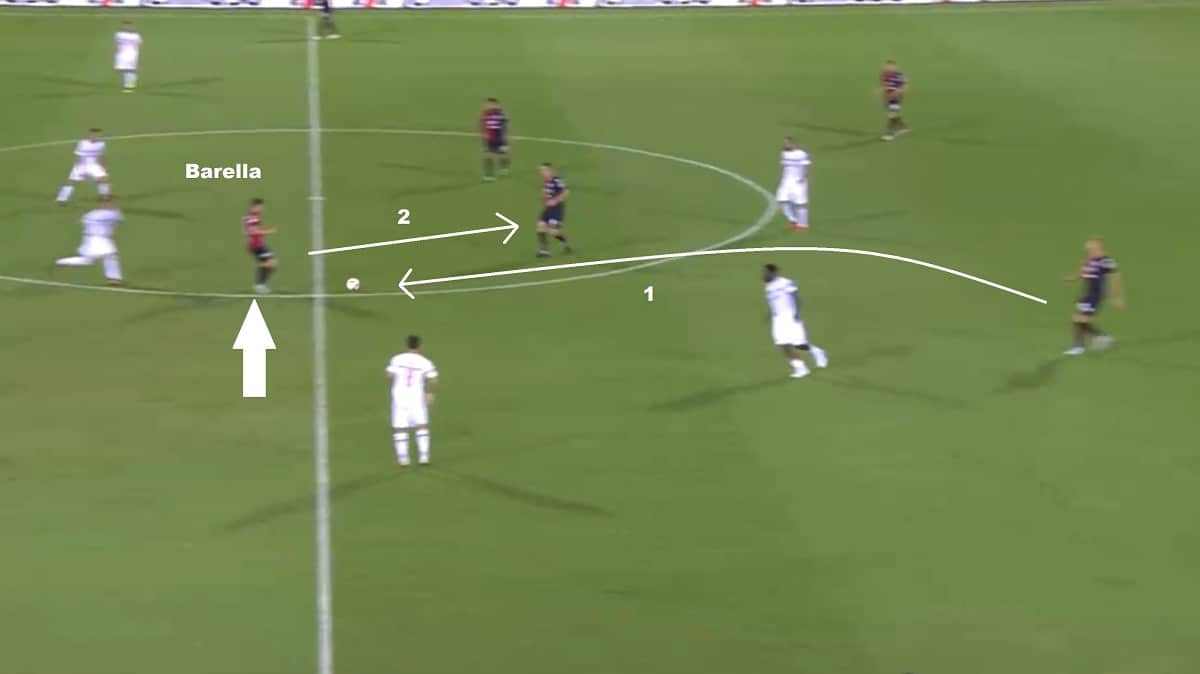 As seen in the graphic above, he has astute positioning and control in tight spaces. Here he moves to the left to get out of the Milan defender’s cover shadow and offer a passing lane to his teammate. He then receives the ball between the lines with his back to goal and pressure coming from behind, but doesn’t panic. Instead, he plays a simple pass back to another colleague, who can then advance the attack further.

Barella moves extremely well to open up penetrative passes for himself and others. On top of that, he is constantly looking for ways to connect with teammates through quick one-touch passes and combinations.

And when Cagliari don’t have possession, he becomes a dogged defender. Aggressive and hard-working, he relishes closing down opponents and is unafraid to tackle. His mobility helps him to cover ground quickly, pressing and recovering his position if he is beaten. Below he reads his opponent’s pass and moves to intercept before starting a counter-attack for his own team. 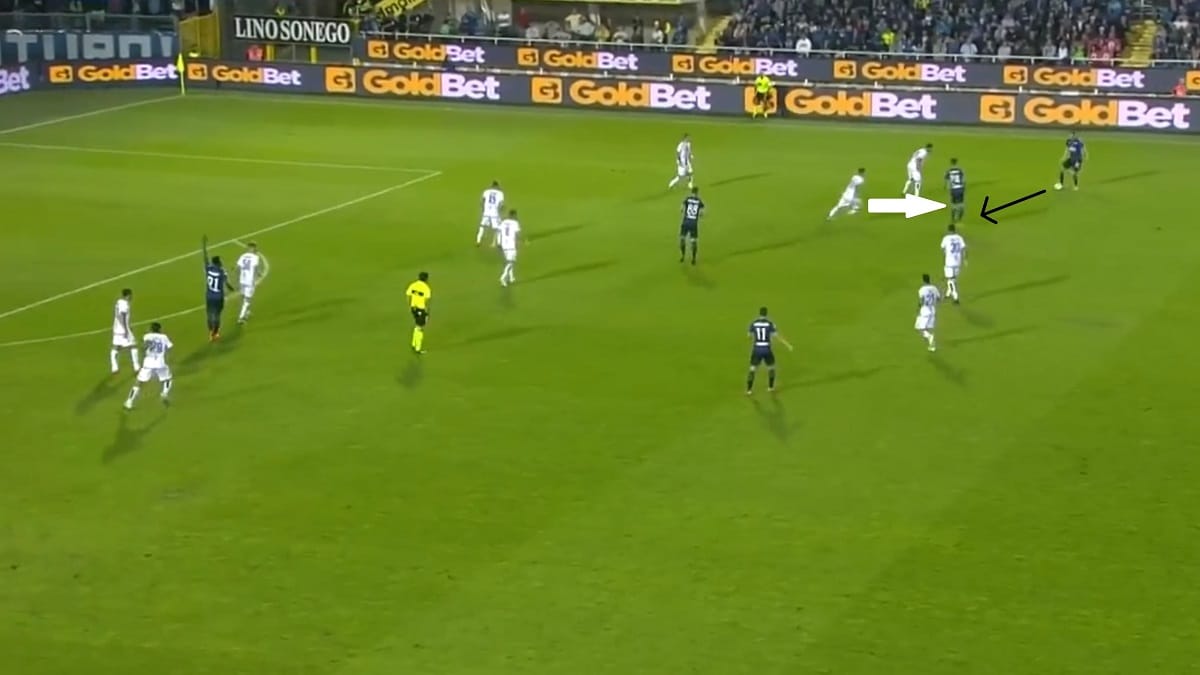 While the Italian completes more dribbles and key passes per game than any of his Cagliari teammates, the attacking standards of the Premier League sides interested in him would require more of Barella on the ball.

His love of cutting inside is combined with occasional aversion to risk, and he would have to be more forward-thinking to enhance either Premier League team offensively.

Earlier this year, Barella signed a contract extension with Cagliari until 2022. However, despite his love for the club, it’s highly unlikely that he will stay with them for the next three years, especially considering the rate at which his stock is rising.

Additionally, it’s worth noting that he turns 22 years old next February. At that point he’ll no longer be considered a prospect, and if he wants to cement his place in the Italy national team he may need to move on; playing for a bottom-half Serie A side isn’t going to be enough.

With that in mind, a January move is a possibility. And, given his admiration of the Premier League, any of Chelsea, Manchester United, Liverpool and Tottenham would stand a good chance of sealing Barella’s signature were they to make a move for him.