All your favourite buzzwords have been used. Arsenal were in ‘pole position', then came Tottenham Hotspur looking to ‘gazump' their rivals. Chelsea ‘stole a march' on Manchester United, who only expressed interest.

Other ‘noted admirers' include Manchester City and Liverpool. The usual continental suspects are said to have ‘thrown their hat in the ring' too. Bayern Munich. Barcelona. Real Madrid. They've all been mentioned.

But our focus is on the Premier League. Pépé, who seems destined to leave Lille this summer following club's president Gérard Lopez's latest remarks, may well end up in England.

The top six have the financial flex to meet Lille's valuation – likely around £70million – and at least four of them will be able to offer Champions League football.

But who would the prodigiously talented 23-year-old suit best? Let's dive into each side's respective merits.

We'll work our way down the table (as it currently lies, of course).

On the surface, Liverpool seem like a decent fit for Pépé. They're capable of executing swift counter-attacks, something in which the Ivorian excels.

He's also noted for being more of a wide striker than a traditional, touchline-hugging winger. He struggled when Marcelo Bielsa experimented with him at centre forward but, at Anfield, he'd more likely slot into a wider berth.

Quick and direct, Pépé certainly has the potential to become Liverpool's latest African star. The Reds are expected to seek attacking reinforcements this summer but haven't been mentioned as much as others when it comes to Lille's 19-goal man.

Yes, Guardiola is a wonderful teacher and, yes, he certainly has the motivational tools to take the former Angers starlet to the next level, but, at the risk of sounding like a broken record, City really don't need him.

Sure, nobody is going to turn their nose up at a player of his quality but Guardiola has Raheem Sterling, Leroy Sané, Bernardo Silva and Riyad Mahrez at his disposal.

Also, Pépé wouldn't have been inspired by Mahrez's tale since jumping from Leicester City to the City. In less than a year, he's gone from being one of the Premier League's most enchanting attacking talents to being just another expensive piece of furniture at the Etihad.

The Algerian has started 13 league games for City. Sané has started 20. That's how tough breaking into Guardiola's line-up is.

Hello transfers, my old friend. After a couple of barren windows, Spurs are expected to make a statement or two this summer. To keep Christian Eriksen, Dele Alli and Harry Kane content, you feel they have to.

Lucas Moura remains the last player Spurs signed but, having settled into their slick new digs, they're planning for an exciting new era.

Tottenham's need for new talent has become increasingly apparent. Since Christmas, they've gone from outside title contenders to top-four battlers.

It hasn't been pretty. They've lost ten times and, although Heung-min Son has been excellent, you feel as though they need another dynamic attack-minded player to breathe new life into the Mauricio Pochettino regime.

According to reports earlier in the season, Spurs have made Pépé and Tanguy Ndombélé, Lyon's brilliant midfielder, their top two targets. After the tumbleweed of last year, it would be one helluva statement if they were to land both ahead of the 2019/20 campaign. 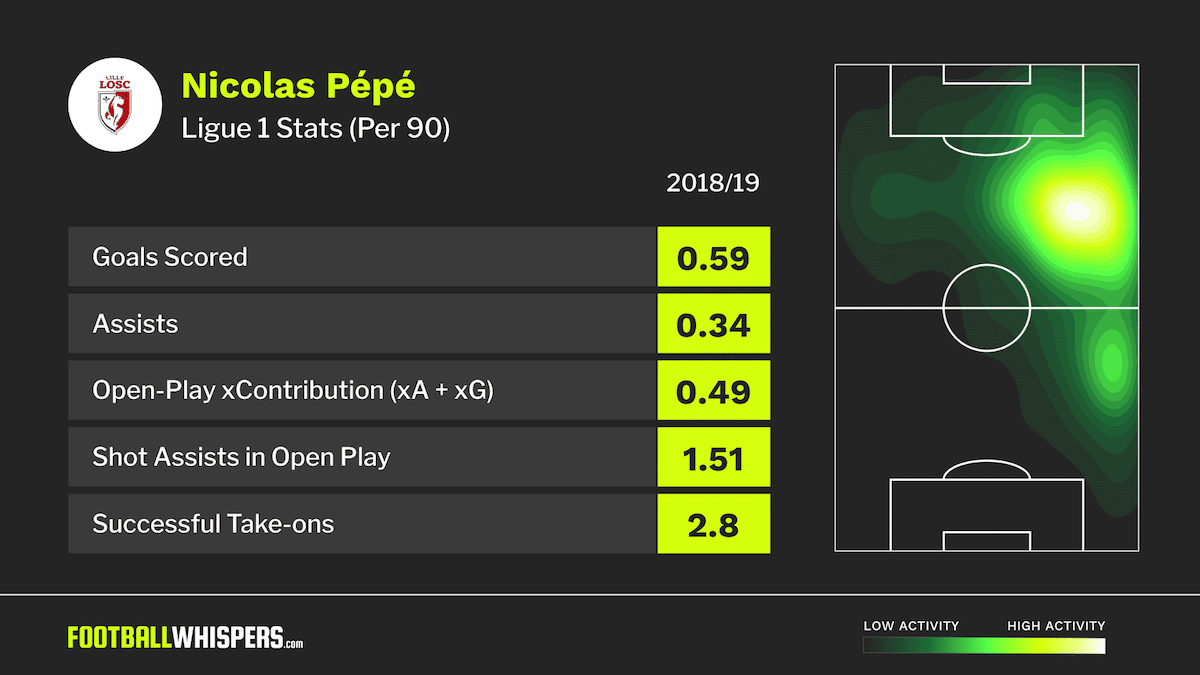 A lot depends on who qualifies for the Champions League. Pépé, the only player in France to have reached double figures in goals and assists this term, feels as though he has earned a lucrative contract and the chance to shine in the same competition as the world's best players.

That, of course, isn't limited to him. Whoever fails to secure Champions League football for next season will see their position in the transfer window significantly weakened.

For Chelsea, however, much also depends on Maurizio Sarri. The cigarette butt-chomping Italian has been linked with Roma after a difficult first year in England and managerial uncertainty at Stamford Bridge may affect any potential Pépé pursuit. 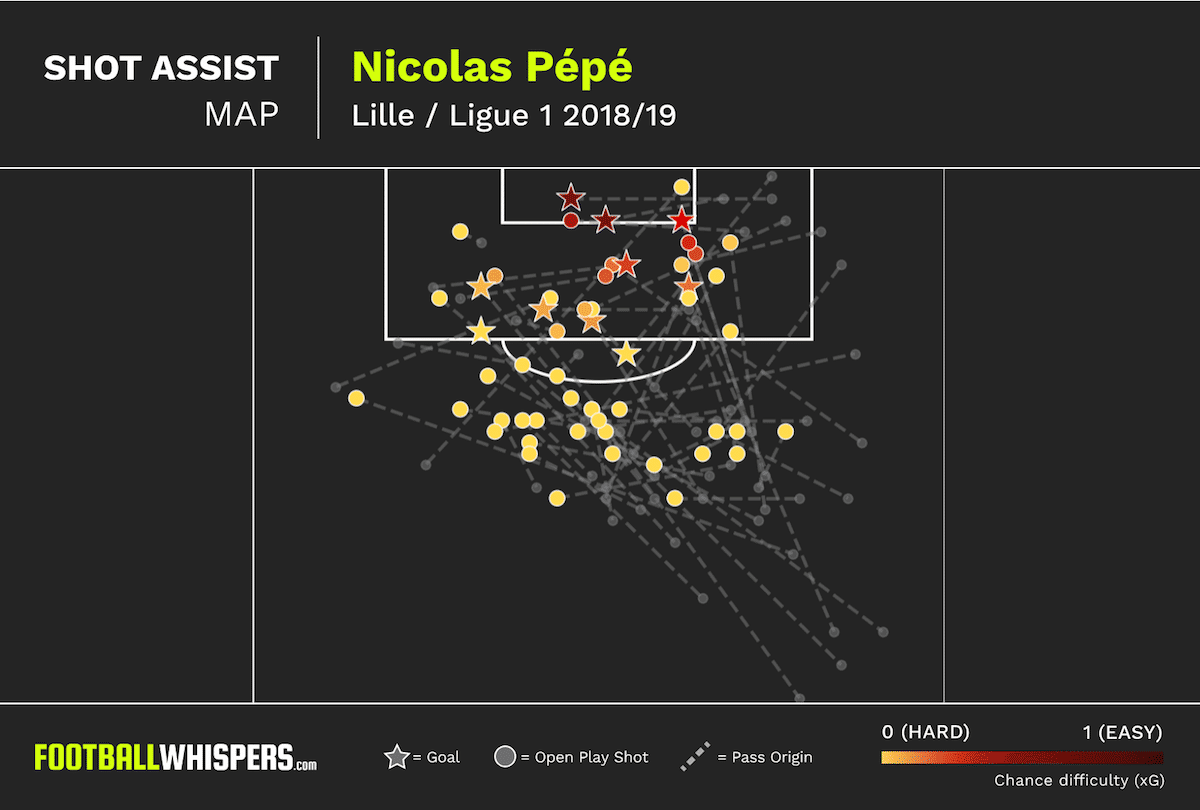 Out of the six teams, though, Chelsea need him the most. Eden Hazard is likely off, Callum Hudson-Odoi might follow him out the door while upgrades are needed on Willian and Pedro, who will turn 31 and 32 before the start of next season.

The final caveat for caveat-heavy Chelsea is that they still don't know if they can sign players in the summer. An appeal against the transfer ban is being heard, so it's all up in the air at the moment.

United are perhaps the team best suited for Pépé. If post-summer splurge Ole Gunnar Solskjær adopts a 4-3-3, the Ivorian could have the major impact United wanted Alexis Sánchez to have.

With Marcus Rashford and Anthony Martial, he could form a devastatingly quick trident in attack.

And United's squad definitely could do with some freshening up. Sánchez alternates between injury and playing like he's injured while Martial has struggled to introduce consistency into his game.

United would need to alter their style for Pépé, however. As illustrated in Football Whispers' Team Comparison personas above, Lille play with more speed than United, who tend to be more of a possession-heavy side.

Direct, creative and clinical, if United were prepared to spend £50million on Fred, they should spend £70million on one of the continent's emerging stars.

Arsenal have been linked with Pépé for what seems like an eternity (it's actually only been a few months).

It makes a lot of sense. The Gunners aren't exactly overburdened with natural wingers and the 23-year-old certainly has the kind of game to bring out the best in Pierre-Emerick Aubameyang and Alexandre Lacazette.

Unai Emery will lose a class act when Aaron Ramsey departs for Juventus and, with the Spaniard presumably keen on filling that creative void, he may be lured to the man who made light work of the 47-year-old's former employers Paris Saint-Germain on Sunday night (a goal and two assists in Lille's 5-1 win over Ligue 1's champions-elect added another £10million onto Pépé's price-tag).

Of course, Arsenal's possible Pépé chase may be shaped by the future of Reiss Nelson. Currently on loan at Hoffenheim, there may be a place for the 19-year-old under Emery next season. It's difficult to see him incorporating both into his plans.

It seems as though Pépé would slot into most teams comfortably enough but he'd risk stagnation at talent-rich City.

As a lethal counter-attacking weapon, it's easy to see him popping up at Arsenal or United, but they'll need to secure Champions League qualification first.

Whatever happens, expect to see a deluge of Pépé reports in the next couple of months.