When Thierry Henry talks, Arsenal fans inevitably listen. So it was interesting to hear the Gunners legend come out in support of club-record signing Nicolas Pépé during the international break.

Arsenal agreed a £70million deal with Lille to sign the Ivorian winger in the summer. It was hoped he could form one of Europe's most potent attacks alongside Pierre-Emerick Aubameyang and Alexandre Lacazette and guide the Gunners back into the Champions League.

But 15 games into his career at the Emirates, Pépé has only three goals to his name. Perhaps more pertinently, none of these have come in open play. Optimism over his arrival has quickly been dampened.

That is something Henry can understand. He may now be Arsenal's all-time top scorer and adored by every Gunners fan, but there were also doubts over his ability early into his career in North London following a switch from Juventus in 1999.

“He needs to make sure he doesn’t listen to that [criticism] and go out and perform,” Henry told Yahoo Sport.

“It’s not always easy to arrive in a team, adapt to a new style of play. The Premier League, as we know, is not the same as the French League or any other league, by the way.  So he needs to adapt to that. We need to give him time.”

“At the minute, it’s not a Pepe thing, it’s an Arsenal thing. Hopefully, he and the team can get better so we can get in the top four again.”

Henry makes a valid point: Pépé hasn't been dropped into an all-conquering Arsenal side. It's quite the opposite, in fact.

The Gunners may sit sixth in the Premier League table but they've won only four top-flight games this term, have scored just 16 goals, half of which have come from Aubameyang, and have one victory in their last six.

There is constant speculation over the future of head coach Unai Emery. While there has been the high-profile fallout between fans and club captain Granit Xhaka.

The environment is very different to that which Pépé thrived in at Lille last season. At the Stade Pierre Mauroy, he was part of a close-knit, dynamic, entertaining and devastating counter-attacking side.

Pépé was Lille's to-go star. The man to deliver in key moments. At Arsenal that isn't the case… yet. Below are the winger's heat maps from his final campaign at Lille and this season with the Gunners. 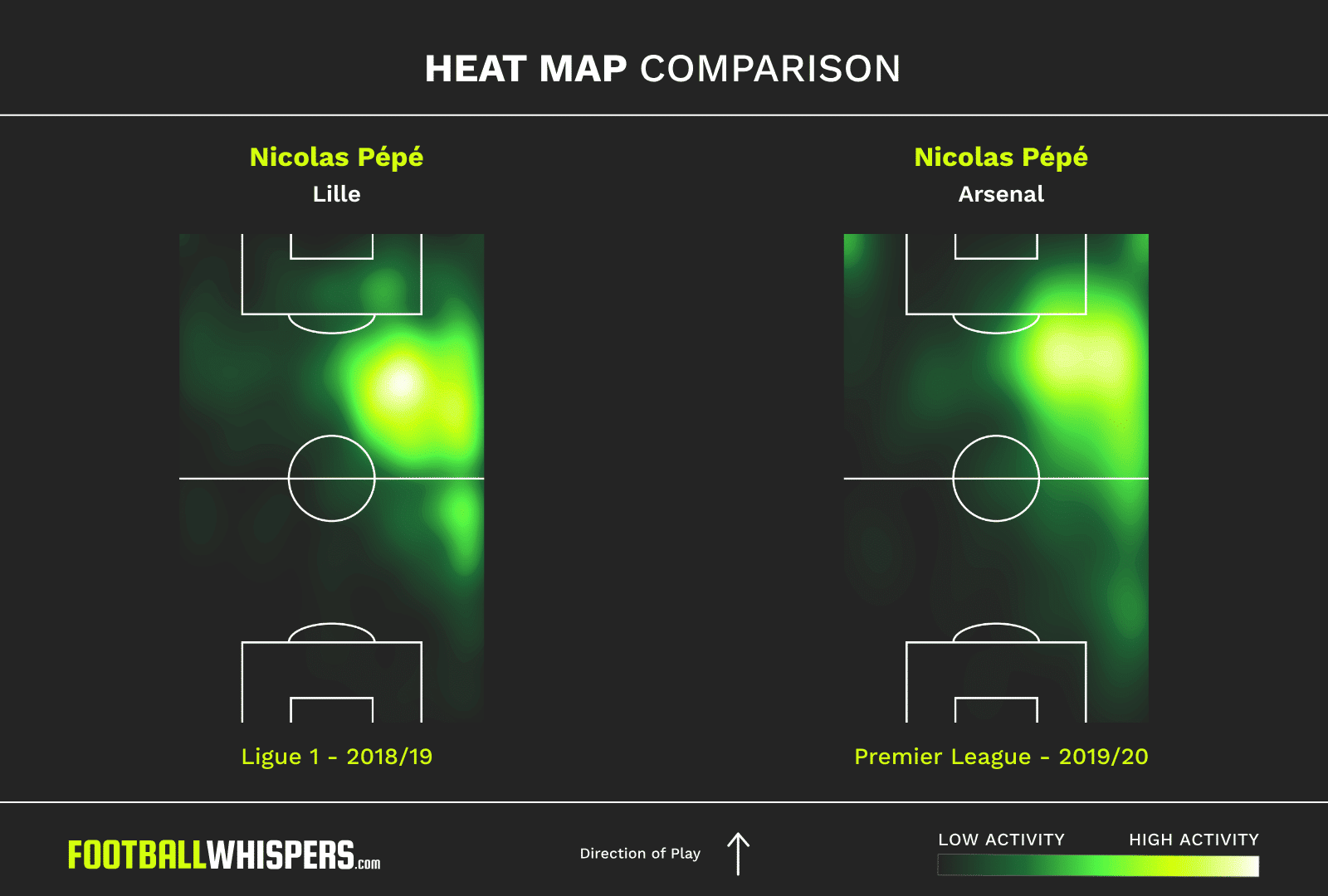 What's clear is he's operating in predominantly the same area of the pitch. However, it should be noted he is doing far more work in his own half under Emery.

At Lille last term, Pépé attempted just 0.73 tackles per 90 and only reclaimed possession 1.11 times per 90 in his own defensive third. For Arsenal, those figures have risen to 2.06 per 90 across both categories.

That defensive diligence, however, may be hurting Pépé's attacking output. He is no longer stationed high up the pitch, ready to spring forward on the break and breeze in behind backlines. 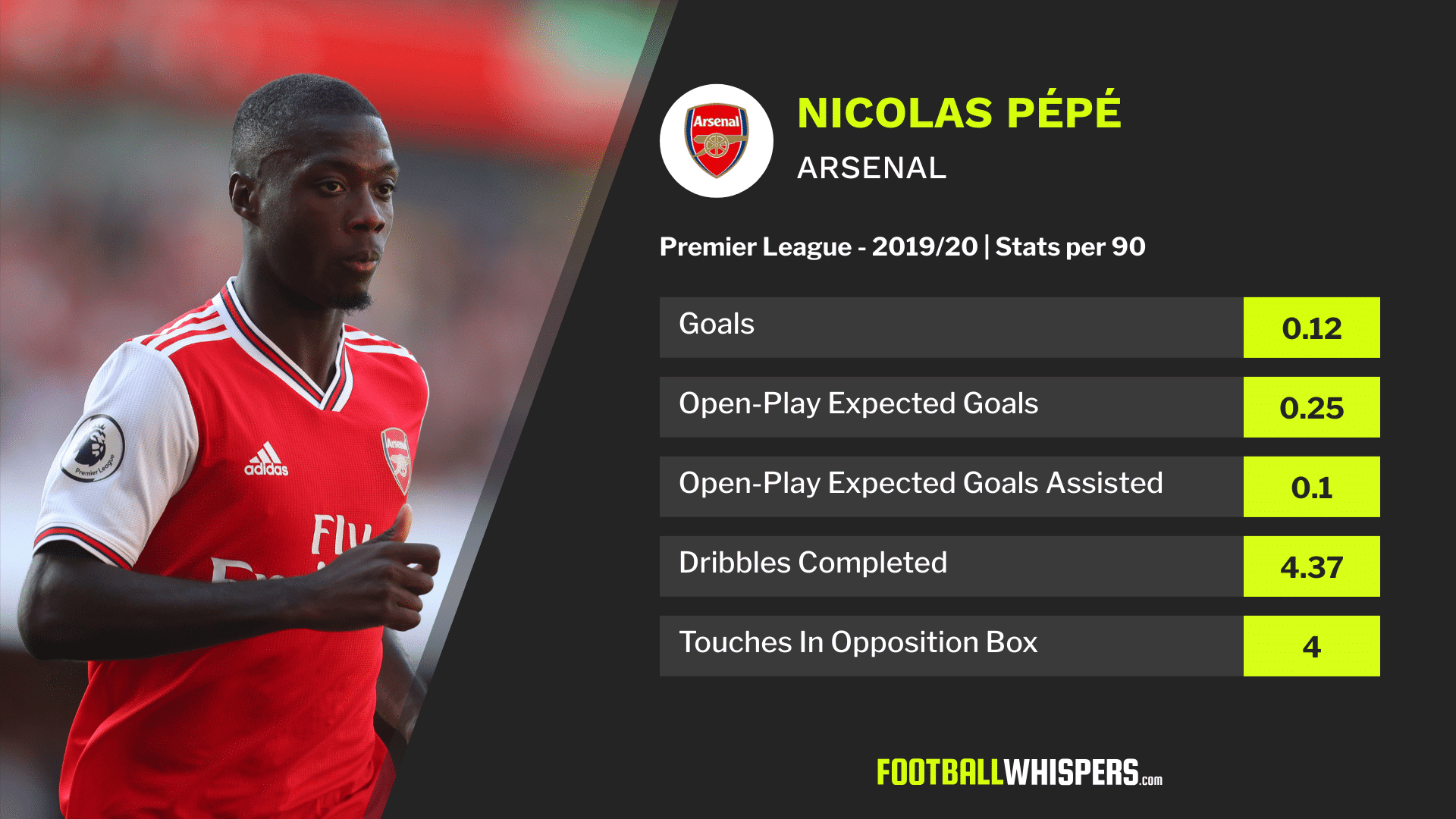 In the graphic above, produced using Football Whispers‘ Sports Data Platform, we have picked out five key attacking metrics. All are significantly down on this season compared to last. Except one: dribbles completed.

That has risen sharply from 2.73 per 90 at Lille to 4.37 at Arsenal, the fifth-most of any Premier League attacker this term and by far the highest of any Arsenal player (Bukayo Saka is second with 2.88).

Pépé has quickly become Gunners' primary ball carrier. The man who can ease pressure or start attacks if given possession. That, coupled with his increased defensive output, means it's hardly a surprise he hasn't yet hit the scoring heights many expected.

However, there is reason for optimism on that front. At Lille last term, Pépé's open-play expected goals per 90 was 0.34 per 90. At Arsenal, that number is 0.25. It isn't a sizeable drop-off and suggests, sooner or later, the Ivory Coast international will start to find the net on a consistent basis and ease the pressure on Aubameyang.

So the evidence suggests Henry is right: time and patience is what Pépé needs at Arsenal. But there should also be an appreciation that the winger has sacrificed part of his game for the greater good of the team. Not something every Gunners player has been prepared to do…