When something works in football, don’t be surprised when other clubs quickly follow suit. Arsene Wenger was the first to really tap into the French market, then Newcastle and Graeme Carr went big. Leicester City have recently shown there is still great value in Ligue 1 and now, reports suggest that the North-East club, and both Merseyside teams are looking to follow their lead.

You can’t just waltz up to the top clubs in France and steal their talent now, the likes of Paris Saint-Germain, AS Monaco and Olympique Lyonnais are too savvy and you will have to pay a premium. That’s why the Foxes went to SM Caen and Le Havre for N’Golo Kante and Riyad Mahrez and now Angers SCO forward Nicolas Pépé is the latest young talent to pop up on the Premier League radar.

Who is Nicolas Pépé?

His rise over the last two years has been dramatic to say the least. After winning promotion to the Angers first-team in 2015, he was loaned out to third division side US Orléans after just seven appearances in Ligue 2. His seven goals helped them win promotion and he was quickly pushed into the first-team on his return.

Even though he had only made one start in Ligue 1 by November, he had done enough off the bench to earn his first international cap. Coming off the bench for the Ivory Coast against France, the country of his birth, he may have only played four minutes, but it showed just how far he had come.

Angers are a mostly defensive team that like to play on the break and this suits Pépé perfectly. The 21-year-old is lightning quick, not just fast, but the type of speed where you invite the defenders in, confident of knocking the ball past just about anyone and knowing you will be first to it on the other side.

Pépé has now started five out of his 18 appearances going into the winter break, but it’s been enough for multiple clubs to take notice. Lyon are extremely interested, proposing a €6 million deal, plus bonuses, but as France Football and L’Equipe reported, Monaco, Lille, AS Roma, Liverpool, Everton and Newcastle United are very keen.

He has played mostly on the right this season, but as he favours his left-foot heavily, it can be detriment to his ability and raw skills. Too often he bursts down the touchline and gets away from his markers, but he has to cut back on to his left, losing that advantage. The Mantes-la-Jolie native can use his right-foot, he’s done it on a few occasions, but as an attempted rabona against Nantes showed, he really does prefer his left.

Playing for Orléans it was clear that he was destined to play at a higher level, and nothing suggested that more than his goal against Colmar. Picking up the ball in his own half, he was forced backwards, but dribbled out of trouble and kept his side in possession.

He follows the play and is given the ball back (yellow). He has a couple of options in front, but sees the space and pushes forward. 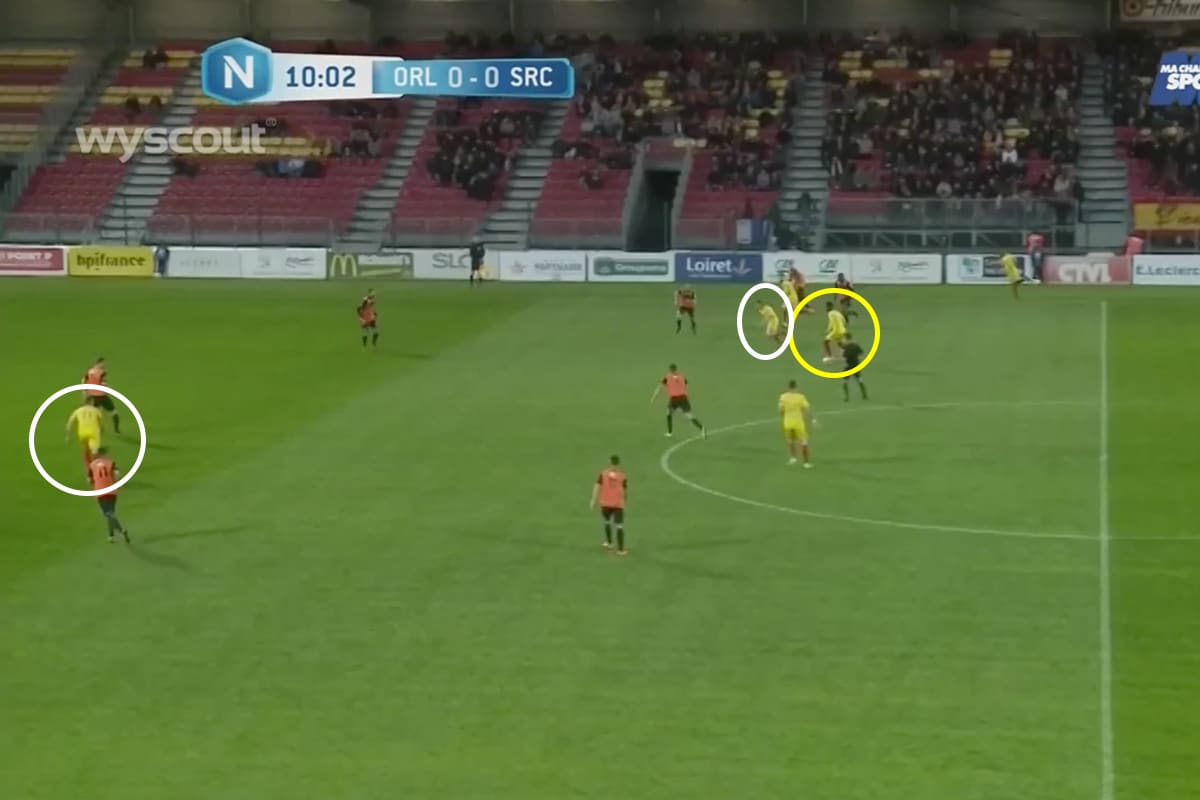 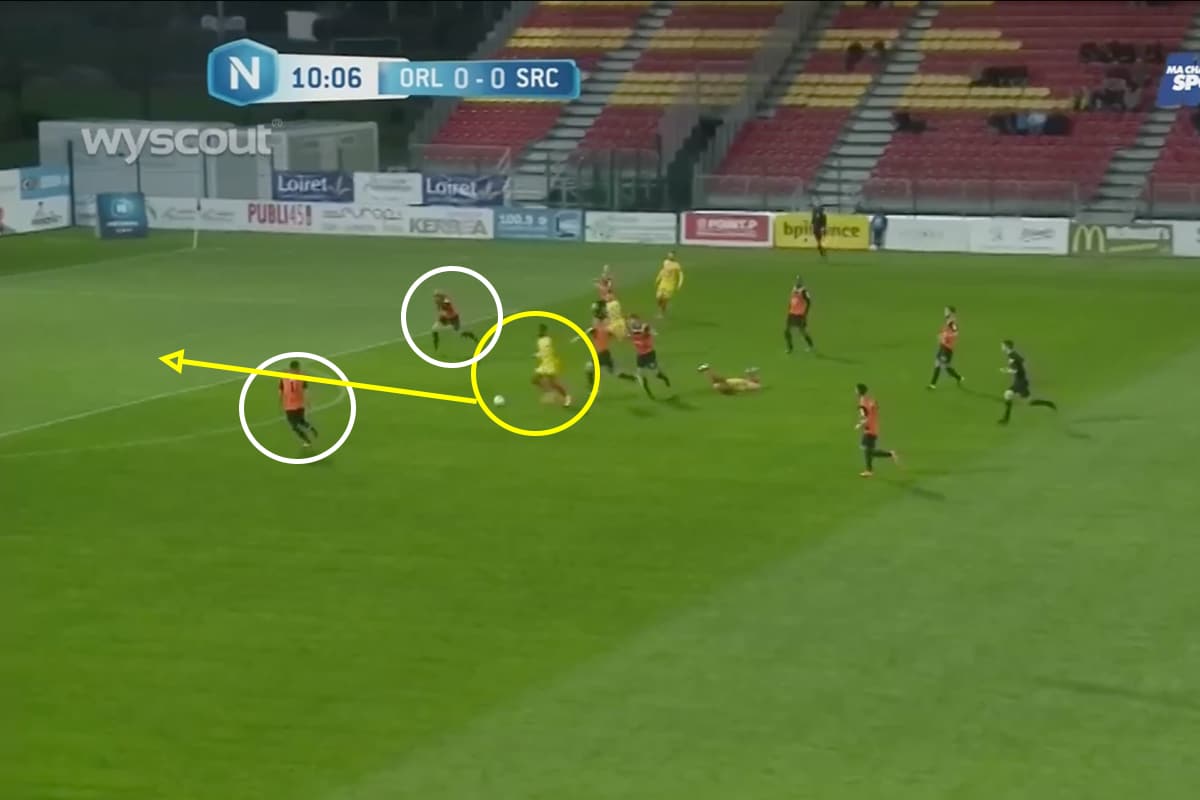 The winger then plays a low pass to the centre-forward, but is driving forward looking for the return. Pépé gets the ball 20 yards from goal, bursts past the helpless defenders before tucking the ball past the ‘keeper. A superb solo move, and one he started 75 yards from the opposition net.

As well as his speed, Pépé’s also very strong, a superb athlete overall. He has also shown to have a good touch and vision to pick out some neat passes in and around the box. He’s not all just about running and shooting – although he is not afraid to shoot from distance.

Give him half a yard and the ball in the final third and there’s a good chance the Ivorian will try his luck. He showed his confidence in doing just that at the Parc des Princes with his team 1-0 down to PSG. It wasn’t far away either, with Alphonse Areola scrambling across to cover his left-hand post.

Far from the finished product, there is a lot of refinement to be done to his game. The 21-year-old needs to work on his final ball, either to make his delivery on his right better, or to get crosses off quicker with his left. Due to him checking back when playing on the right, the defence get a chance to set themselves and runs from the players in the box lose their momentum.

Pépé, at this stage in his career, would be better suited to playing on the left. Using that blistering pace to get beyond defenders and throw crosses into the box. This is something players in France don’t often do, wingers are always keen to cut inside, rarely getting beyond the full-backs and hitting the by-line. That would be encouraged in England and there’s nothing fans like more than an old-fashioned winger that can beat players off the dribble.

Where Pépé's future may lie is through the centre. He showed that with his second goal of the season against Saint-Etienne. When the ball was kept in play on the right, his starting position (yellow) makes it look like Angers are playing two up top. Seeing the space, he is instantly making his run through the centre. 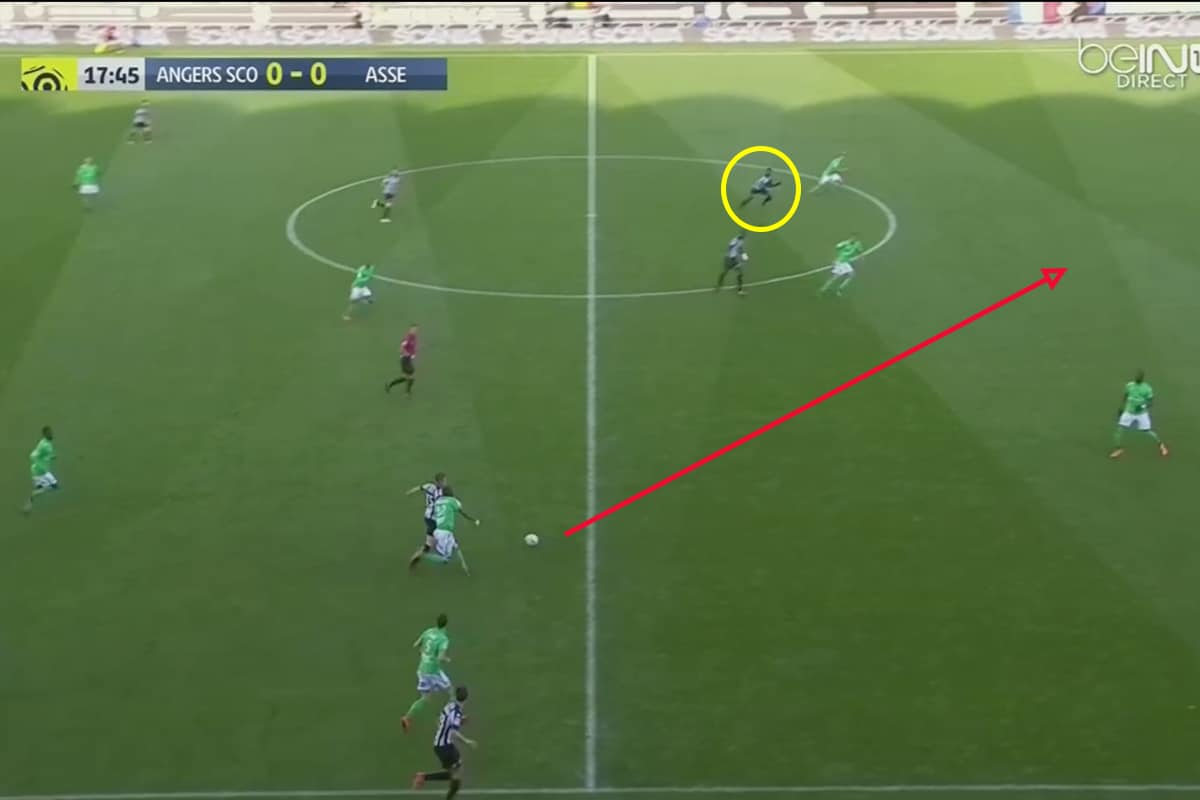 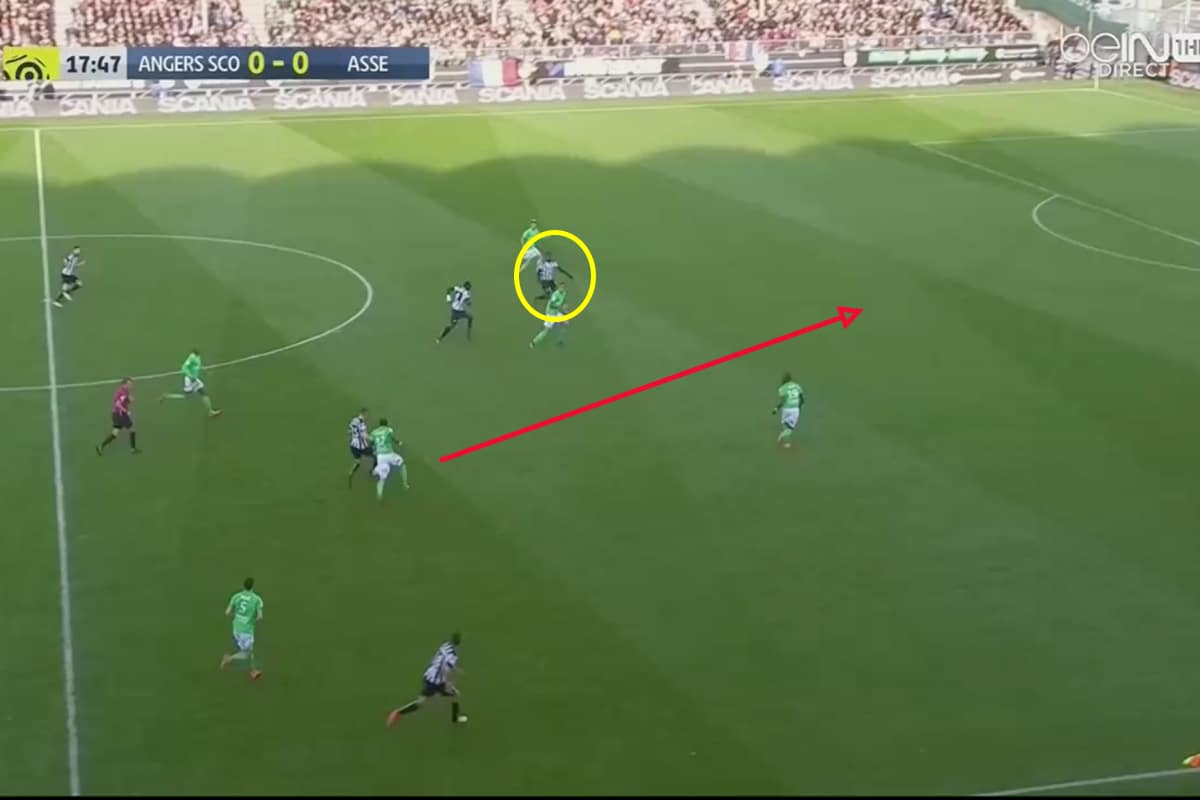 The Sainté defence is all at sea, the centre-back is watching the run from the other forward and the right-back is wary of a threat from behind, so Pépé is free to dart in between them. The pass is perfect; he takes one touch to go around the goalie and the second he finishes with his right. A great example of what he can do through the middle.

Signing for Newcastle would see him given the chance to earn his spurs in the Championship, a touch place where you need all the power and pace you can muster. He could play on either flank, learn from someone like Yoan Gouffran, or even play in the space behind Dwight Gayle. That sort of versatility would be ideal for Rafa Benitez in their chase for promotion.

Angers’ secret is out, Pépé is a real eye-catching talent, but at least the Ligue 1 club will reap the benefits of their exciting youth prospect. Sooner, rather than later.