Wolverhampton Wanderers’ first season back in the English top flight could hardly have gone any better. Nuno Espírito Santo’s side are on course to finish seventh in the Premier League, which would clinch a place in next season's Europa League. They were also seconds away from an FA Cup final.

Last season’s Championship winners have pulled off several shock results against the top six, too, most recently putting three goals past Arsenal at Molineux. They are a strong, well-organised and disciplined side. One capable of building on the foundations laid this season.

Much of Wolves’ success has been based on their impressive back three. Only the division’s top four – Manchester City, Liverpool, Tottenham and Chelsea – have conceded fewer goals than Wolves’ 44. That is largely due to the performances of Willy Boly, Ryan Bennett and captain Connor Coady, a trio who have proven difficult to breach for opposition forwards.

There are, though, reports Santo is looking to bolster his defensive options this summer. Wolves will be looking to progress, to avoid a decline after what has been an unquestionably successful campaign. And their interest in Manchester City’s Nicolás Otamendi is indicative of their ambition.

Such a signing a year ago would have been scarcely imaginable. Otamendi was still a valuable part of City’s squad, still a regular in Pep Guardiola’s record-breaking team.

Now, though, the move may be a more attractive proposition for Otamendi, who has fallen down the pecking order at City. The Argentine has made just 14 starts in the Premier League this season, kept out of the team by a combination of Aymeric Laporte, John Stones and, to a lesser extent, Vincent Kompany.

Otamendi has been linked with a potential move to China, which would, no doubt, be lucrative. Otamendi might prefer to stay in the Premier League, though, particularly given the interest from Wolves. The former Valencia centre-back is represented by Jorge Mendes, the ‘super agent’ who has a number of clients already playing at Molineux.

A switch to Wolves, then, does not seem out of the question. Santo must now decide whether Otamendi is worth the financial outlay, and whether he represents a significant upgrade on the defenders currently at the club.

The Argentina international would certainly add a touch of class at the back for Wolves. He has completed an average of 83.7 passes per 90 minutes this season (with an impressive accuracy of 92.4 per cent), more than the combined averages of Boly and Coady.

That, of course, is largely to do with City’s style of play – their emphasis on playing out from defence – but Otamendi would bring him with that extra element of technique and composure. 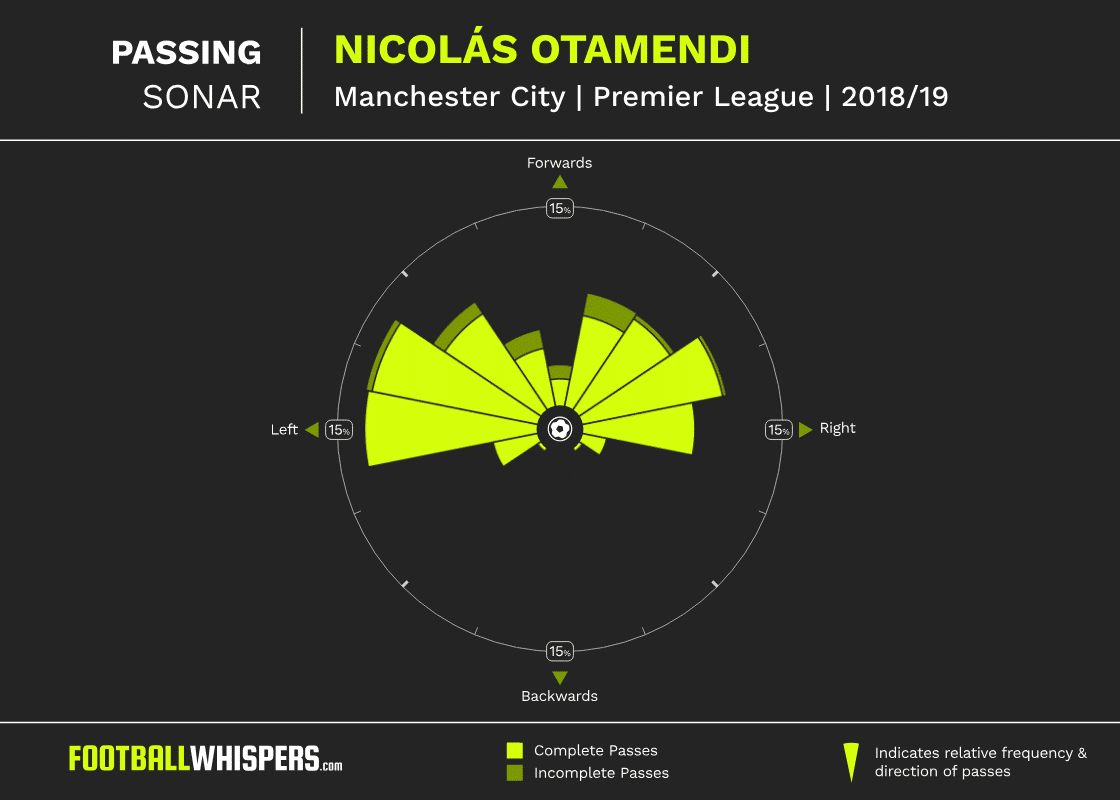 He is an excellent reader of the game, too, managing an average of 2.12 interceptions per 90. And Otamendi is more adventurous with the ball than a typical centre back, averaging an astonishing 102.21 touches and 36.51 passes completed in the opposition’s half per 90.

The Argentine falls short of Wolves’ current back three when it comes to more traditional defending: he has won an average of 3.07 aerial duels per game, fewer than Boly, Coady and Bennett. His average of 1.02 completed tackles per 90 is some way off that of the Wolves trio, too. However, that is much to do with City’s dominance of the ball.

Otamendi would, without question, add quality and experience to Wolves’ defence. And, at 31, he still has plenty to offer as a regular starter for a Premier League club. He is unlikely to get the game time he craves if he remains at City. 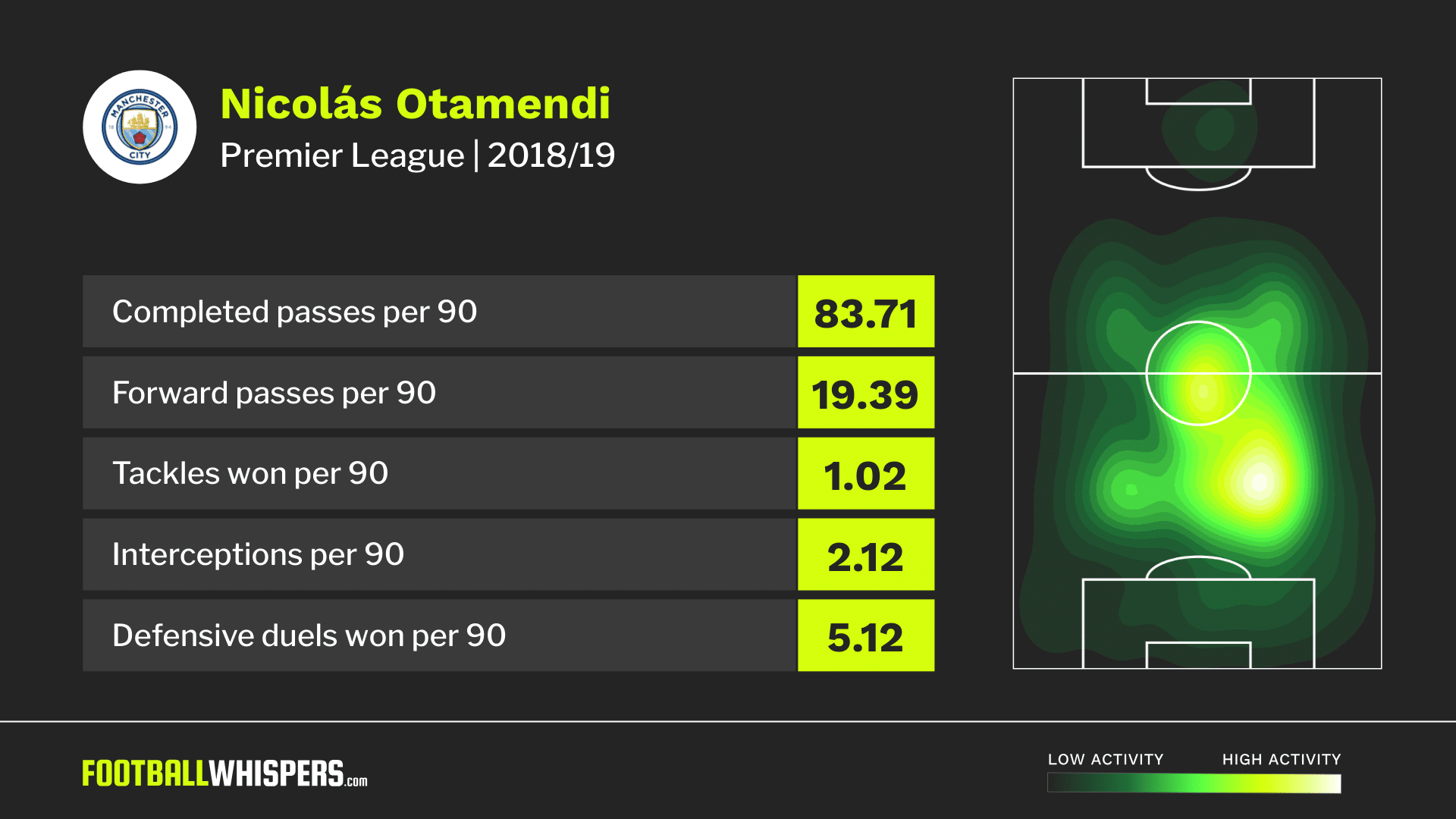 “He's a guy who plays with problems, with kicks, with muscular issues and always he's there. It's incredible. But in the end with Nico, I know we can count on him at any time in any situation because he's an incredible professional and always he's ready. I'm delighted with him but I can understand him [wanting to play more].”

A defender of Otamendi’s quality could prove a major coup for Wolves, who have not been afraid to invest in similarly high-profile players: João Moutinho, for example, arrived having played for Porto and Monaco in the Champions League.

Otamendi has played in a back three, on occasion, for City, so he is unlikely to have any difficulty slotting into this Santo’s system. For Wolves, a signing like this could make the difference between stagnation and reaching the next level.