They say the Premier League table never lies. It does, however, gives teams a false sense of security.

Newcastle United are in 15th position and are just five points behind ninth placed Everton. They should be looking up but instead they're having to look over their shoulder. The Magpies are three points off the bottom and one point clear of the relegation zone.

The bright start to the season has faded and the proposed takeover has hit the rocks. Manager Rafa Benítez is going to have to once again work his magic with limited resources.

He's done it before and there's every chance he does it again.

More often than not the Spanish tactician organises his defence first. However, this time around the issue isn't with the defensive unit. Yes, they're conceding 1.41 goals per 90 minutes this season, but it's still fewer than a number of teams above them and just three more than sixth placed Arsenal.

Their issue lies in the attacking third. They've scored 22 goals in 24 matches at a rate of 0.91 per 90 minutes. Over the entirety of a 28 game season that comes to roughly 34 goals.

Hull City went down last season having scored 37 and there's an argument to be made that this year's relegation scrap will be even tighter. Not just every point counts, every goal counts too.

Benítez realises this and it's why Newcastle have been searching for a striker in recent weeks. Liverpool duo Danny Ings and Daniel Sturridge were tentatively linked with a move to St James' Park. However, the former is now in the first team picture and the latter appears to be moving abroad.

Reports this week emerged that claimed it's Feyenoord striker Nicolai Jørgensen who tops the Newcastle wish list this month, and they're currently in talks with the Eredivisie champions over a £20million deal.

In the current market it's a fair price for a striker with seven goals in the league and a further three in the Champions League.

And we've decided to take a closer look at the 27-year-old Dane to see how he ranks to the forwards currently at St James' Park. 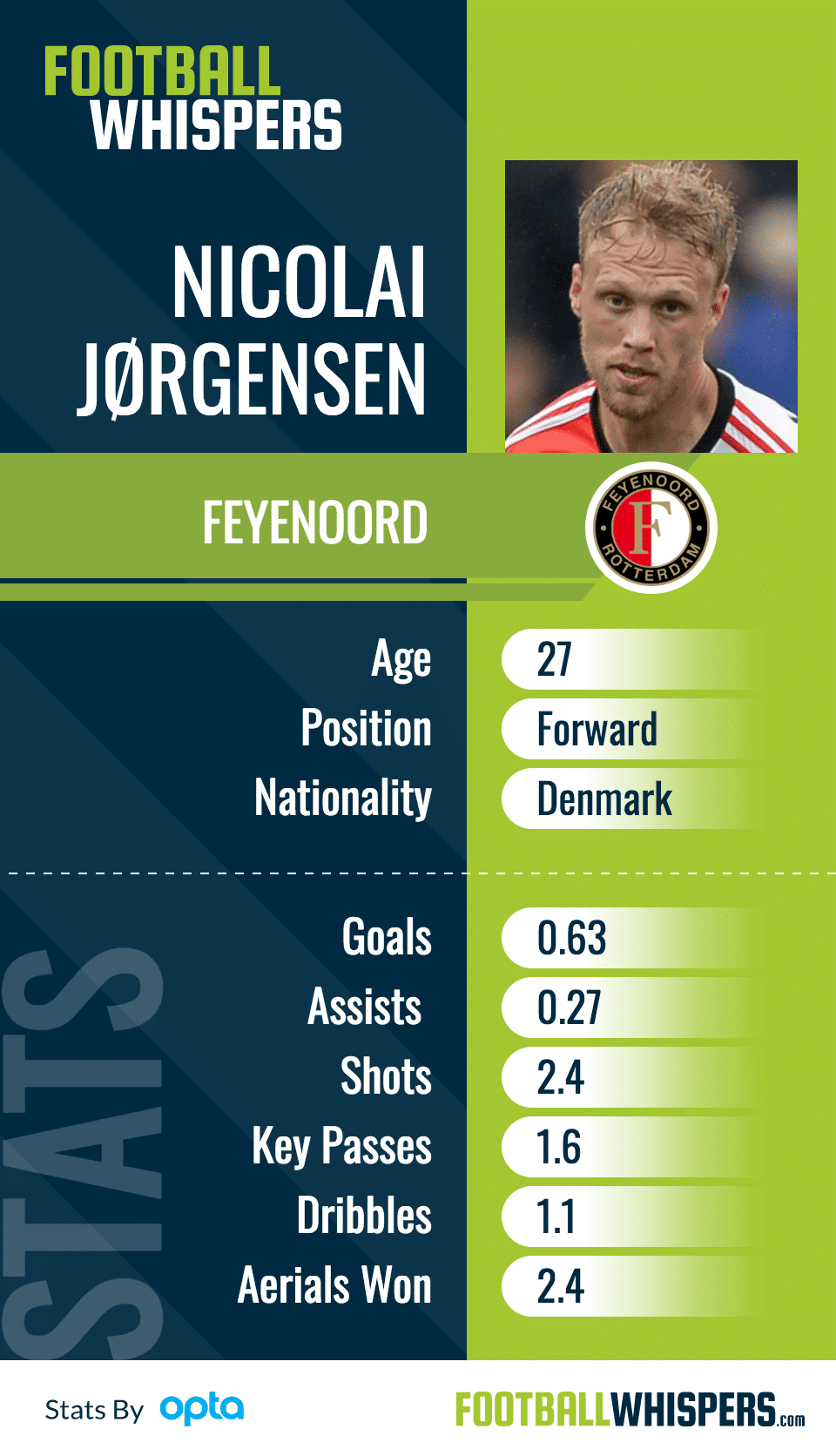 The Feyenoord forward averages 0.63 goals per 90 minutes this season, both Dwight Gayle and Joselu average 0.25 in the Premier League.

Yes, the quality of opponent they're coming up against needs to be taken into account as well as the teams they're playing in, but even if Jørgensen's output halves he'd still be averaging more than the strikers currently at Benítez's disposal.

It's even more impressive when you realise both Newcastle forwards average more shots per 90, proving the man playing in the Eredivisie is more clinical.

Chances are scarce yet he's still managing to put the ball in the back of the net. Just the sort of forward Newcastle need to steer them away from a relegation fight.

Gayle and Joselu trail the Danish international in assists, too. Jørgensen's 0.27 dwarfs Gayle's 0.08 and Joselu's 0.06, showing he's much more than just a goal scorer. As you would expect, the Feyenoord No.9 is also completing more dribbles and playing more key passes per 90.

However, he does win fewer aerial duels than his Newcastle United counterparts. But how much of that is down to style? Standing at 6ft 3ins he has the physical presence to compete in the English top flight.

On paper Jørgensen has all the makings of a stereotypical Benítez forward. He might be the biggest signing of the window but he could be the most important. Goals win you games and the Danish forward is a reliable threat.