Nico Gaitán was meant to be the Argentine superstar to make it in European football. Suffice to say, it has not worked out like that.

He became Benfica's most expensive signing in 2010 when he was signed to replace Ángel Di María, who’d left for Real Madrid.

His performances saw him become subject of Chelsea and Manchester United transfer rumours. But a move to a big club in a major European move didn’t come about until 2016 when he signed for Atlético Madrid.

Yet, just 18 months later, he’s out of favour at the Wanda Metropolitano, and has been linked him with a move to Swansea City, although Watford, West Ham United, Southampton and Everton were also interested earlier this month.

But what would be offer the Swans or any other top flight side? We've taken a look.

Born in Buenos Aires, Gaitán came through the youth ranks at Boca Juniors, whose youth system he joined aged 13.

He made his debut in 2008 en-route to helping the Argentinian outfit to the title. But he found it difficult to make the central attacking berth before switching out wide where he found more success, scoring seven goals and claiming six assists in 31 matches, leading to a £7million move to Benfica.

The midfielder’s first season in Portugal saw him score seven goals in the league, a total he was unable to better while there.

He impressed so much he was named Portuguese League Breakthrough Player of the Year as Benfica finished second and won the Taça de Portugal.

The 2011/12 campaign saw Gaitán lead the way in the Champions League group stage in terms of assists (5) and he looked set for big things. Yet he didn’t really kick on.

While he was a key part of a Benfica side that won three titles, including the treble in 2013/14, he never really became the big player many expected.

He still earned a move to Atlético Madrid in the summer of 2016 for €25million, but his time in Spain hasn’t been an unqualified success.

His first season saw him make just 23 La Liga appearances, scoring three goals, while this campaign he’s only made one league start.

With the arrival of Vitolo now Los Rojiblancos‘ transfer ban is up, there’s no space for him at Atleti.

What are Gaitán’s main strengths?

The Argentine is very comfortable on the ball, he has good dribbling skills and close control, but his main asset is undoubtedly ball distribution.

His long-range passing is more often than not spot on, as you can see below against Elche where Gaitán (circled in yellow) picks up the ball on the left.

He spots Yannick Carrasco (circled in green) on the right of the pitch, takes a touch and plays a beautiful pass right to the Belgian’s feet, almost like a quarterback. 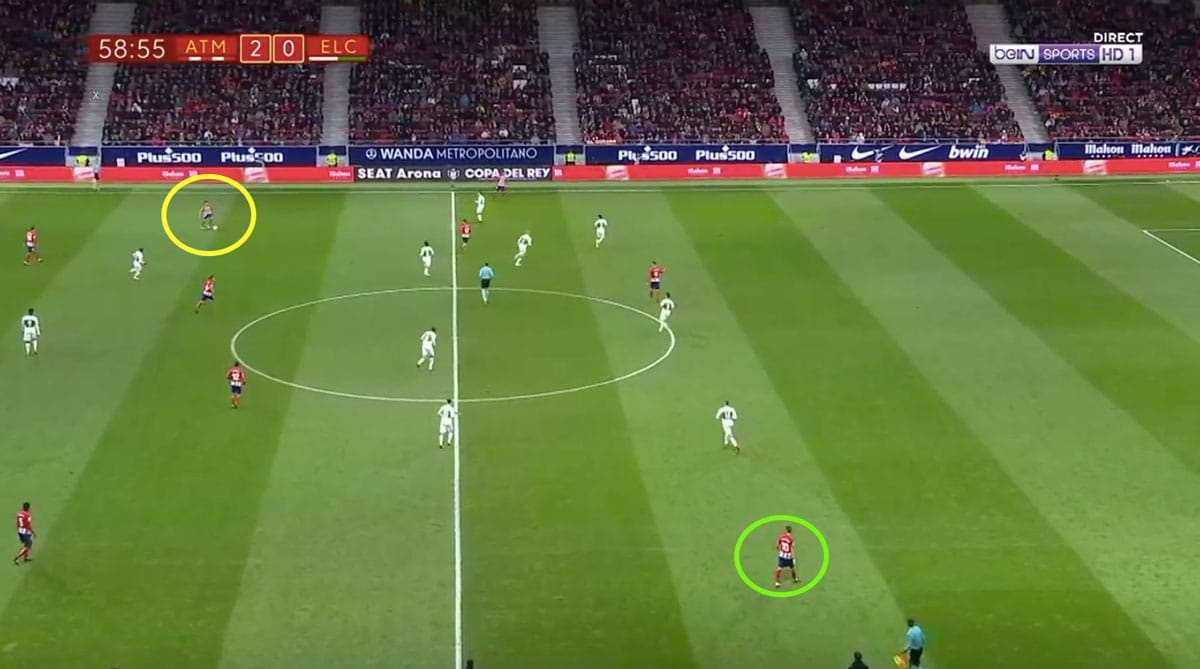 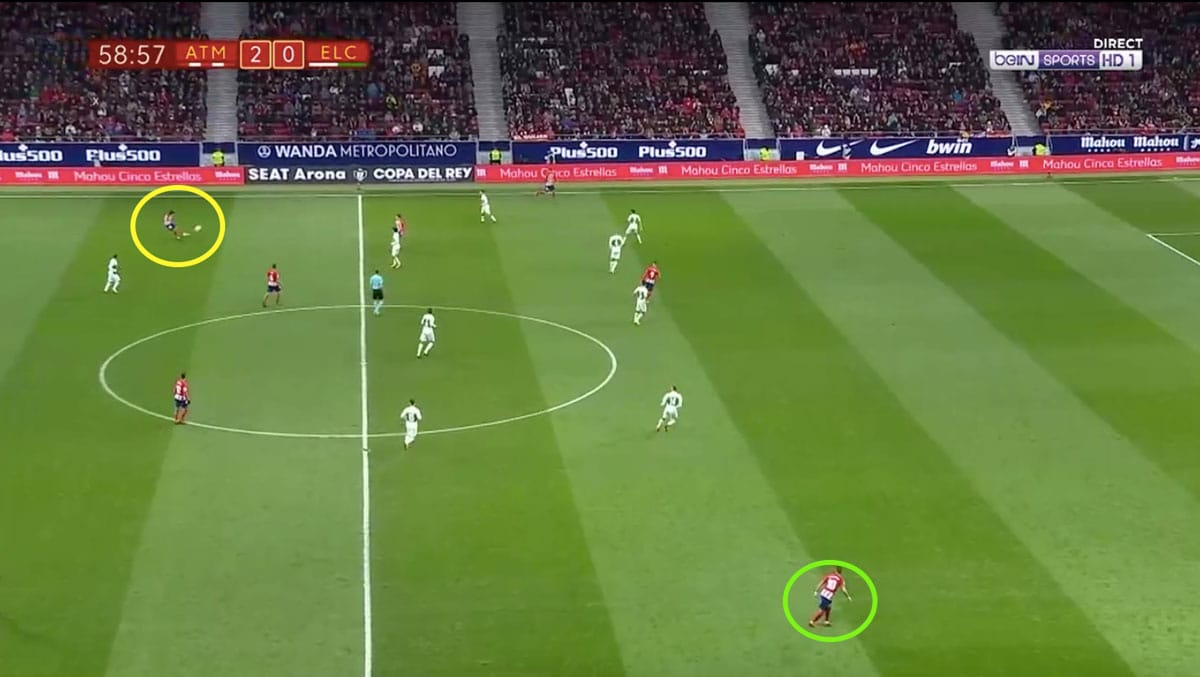 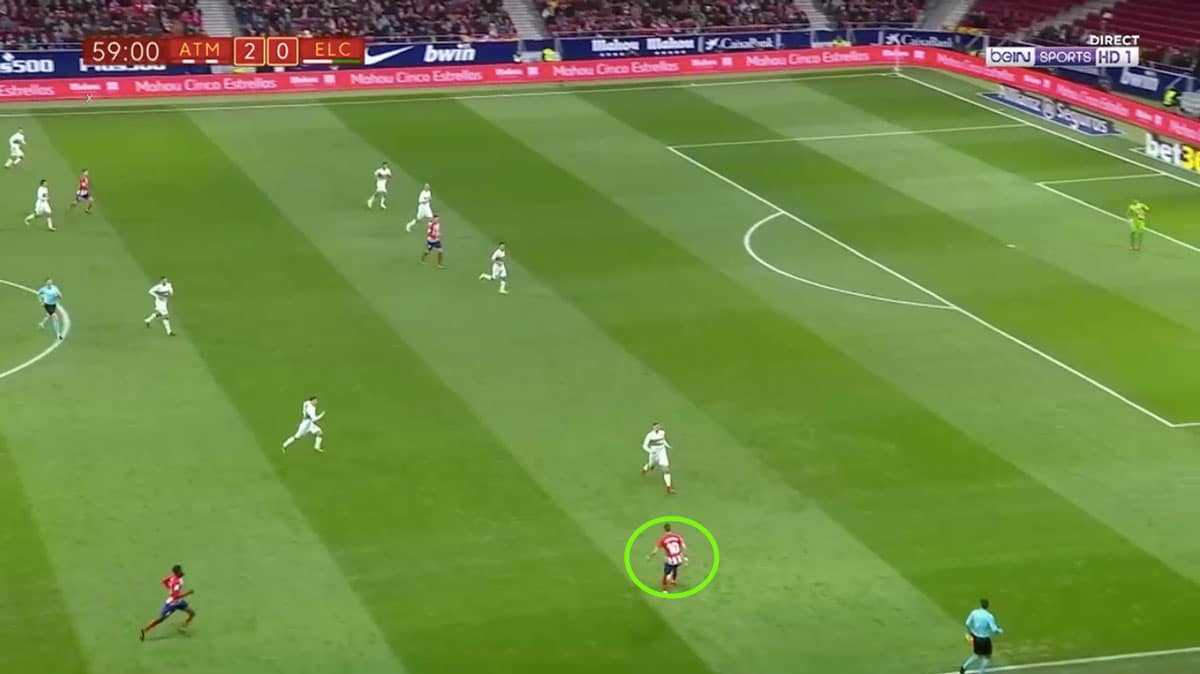 In the same game, you can see how the Argentine (circled in yellow) is comfortable on the ball, running quickly past defenders from the middle to the left, barely looking up and picking out a perfect pass to Fernando Torres (circled in green) at the back post to get a header on goal. 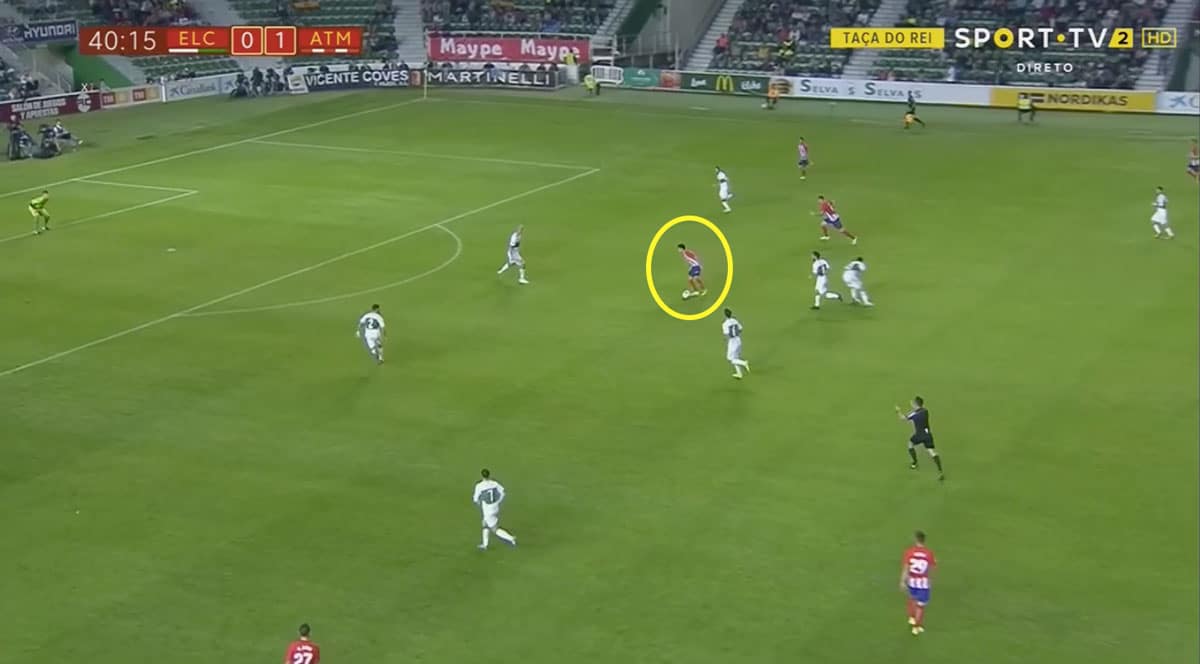 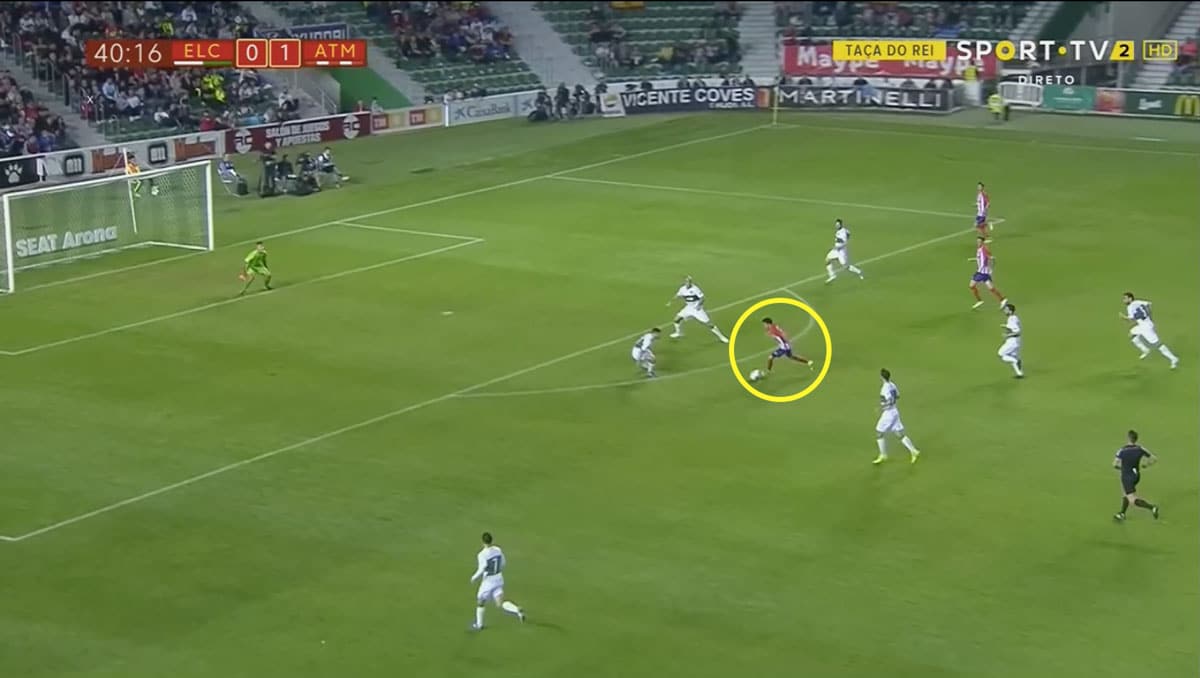 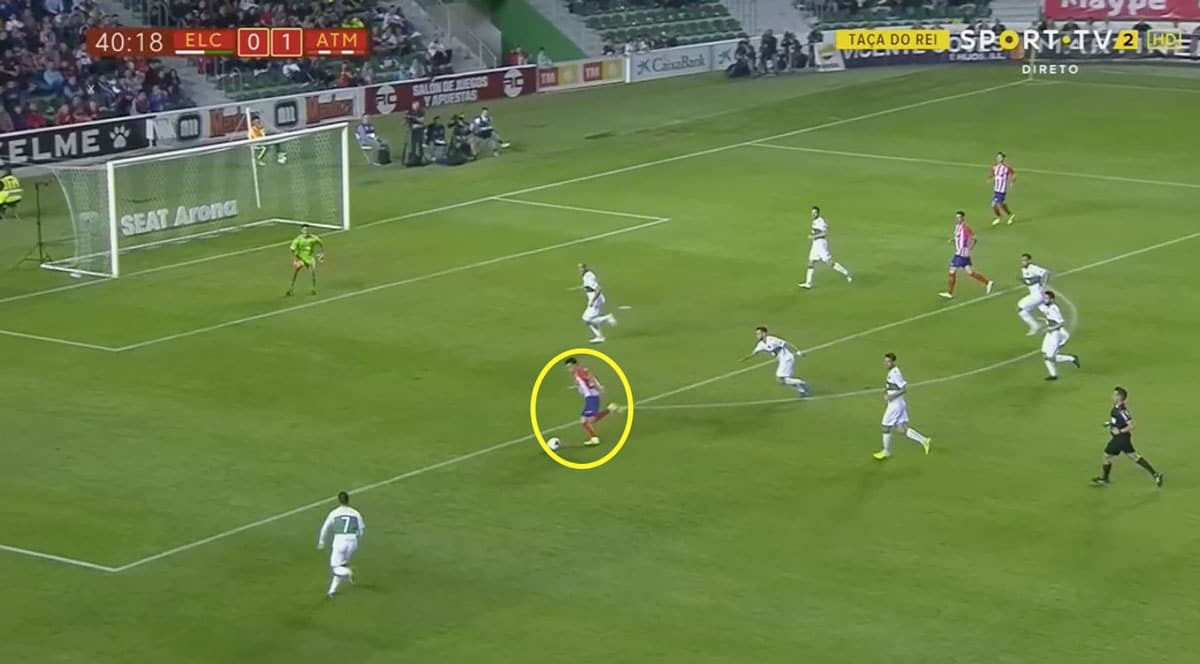 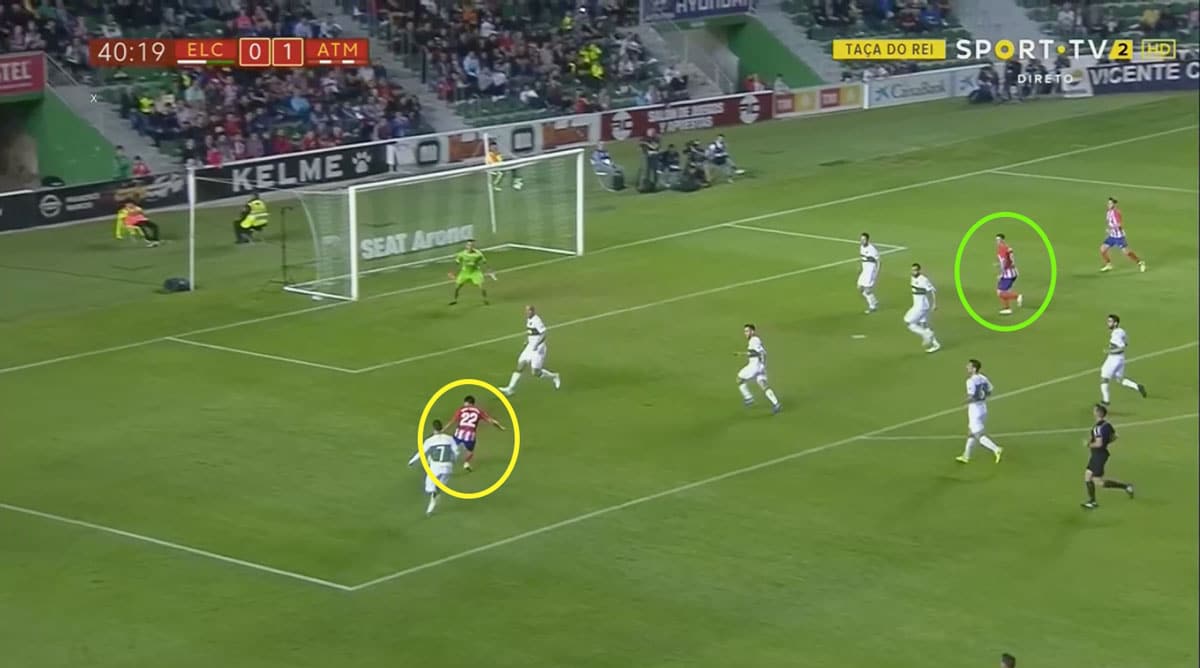 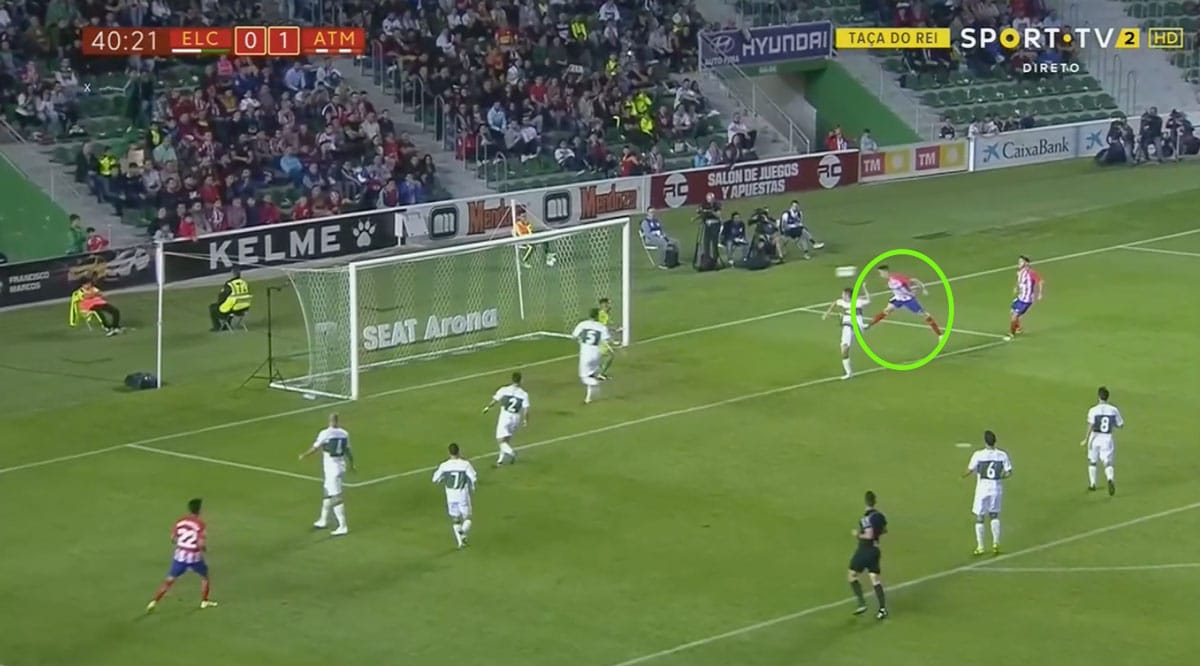 In the stills below his skills are on show as he receives the ball from Juanfran, showing great awareness to take a touch and play a perfect back heel, taking out two players and sending the right-back through towards the box in a dangerous position. 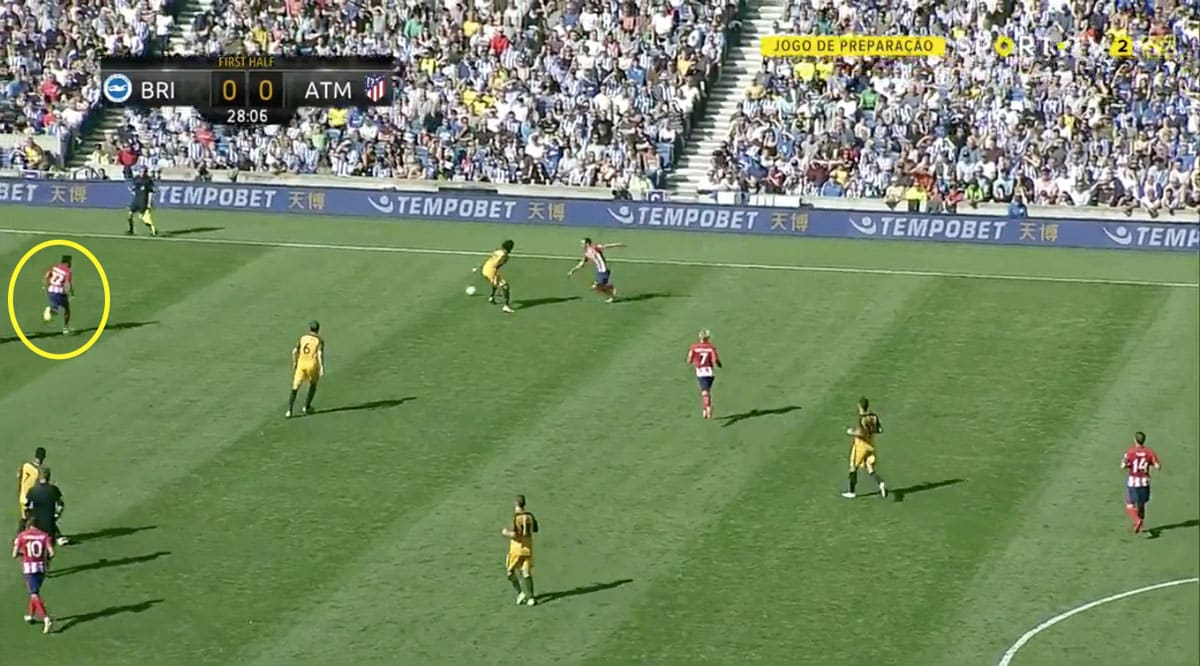 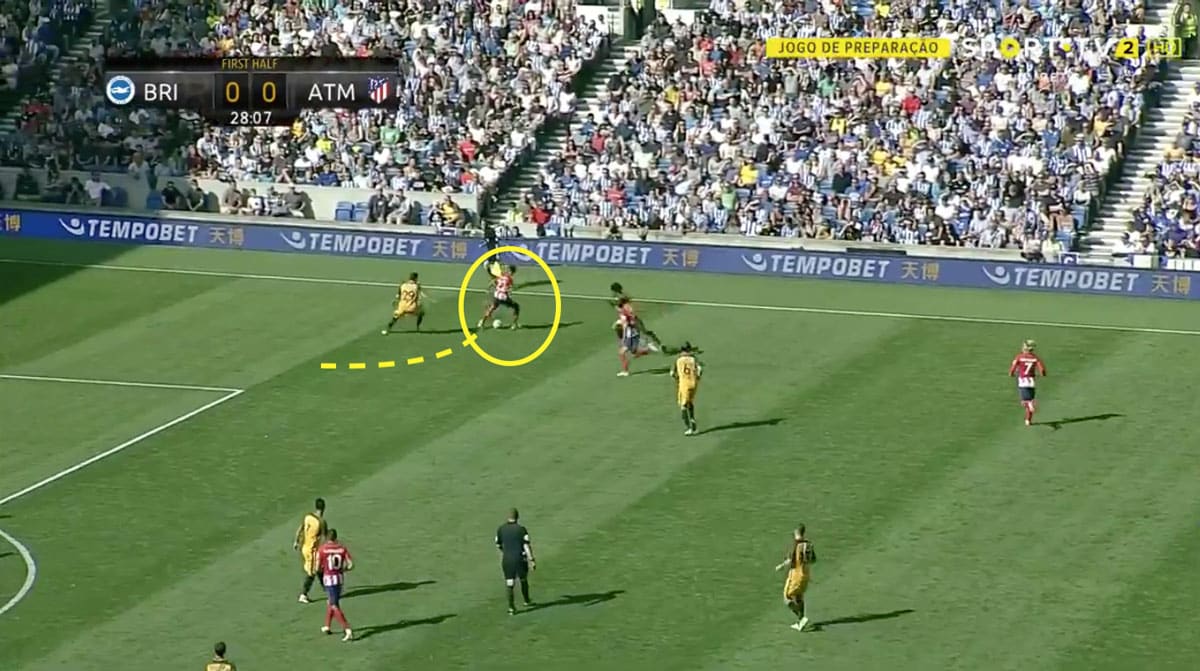 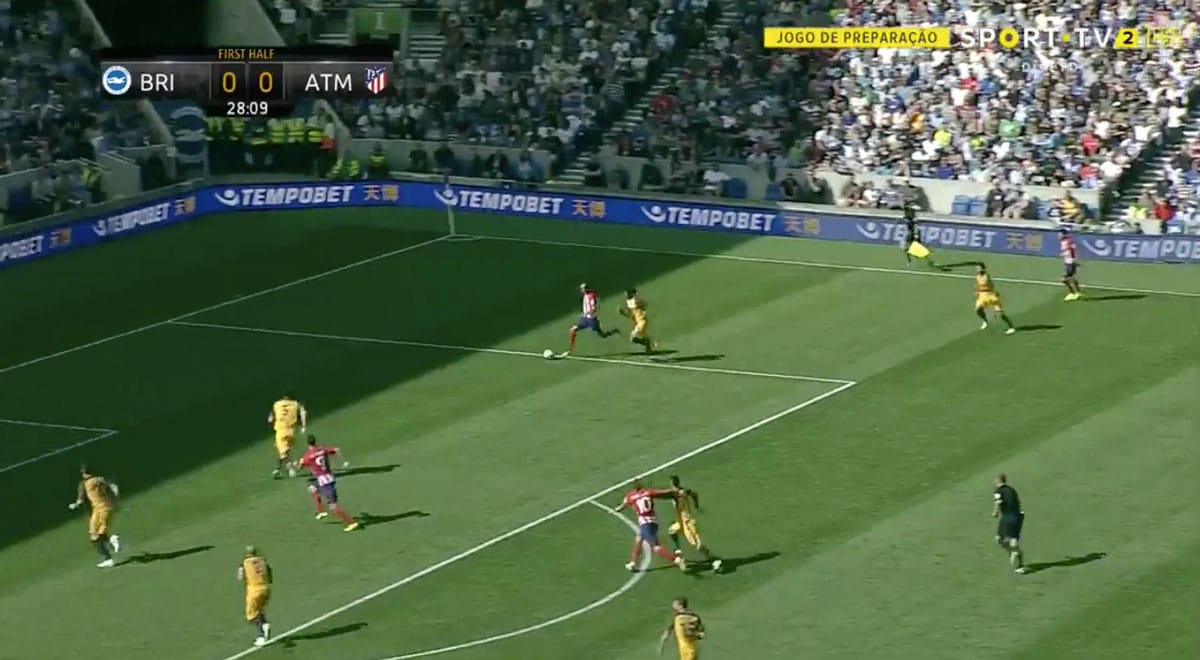 There can be no doubt about the quality of ball to team-mate Gaitán can produce.

What are Gaitán’s main weaknesses?

For an attacking player, Gaitán isn’t a great finisher, managing just four goals in his 40 games at Atlético Madrid so far.

What’s more, after getting 20 assists in his last season at Benfica, he’s only managed five for his current club.

His end product hasn’t been good enough since he’s been inSpain, and he’ll hope to prove his doubters that he’s still got it when he joins his new side.

With such limited game time for Gaitán this season, we’ve looked at his La Liga statistics from last season. 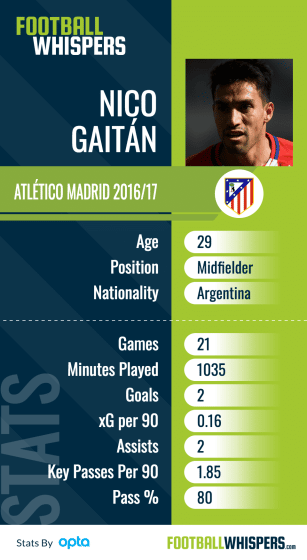 How much is Gaitán worth?

According to Marca, Atleti are willing to take a slight financial hit and could let him go for €20milliion (£17.6million).

They would prefer to let him leave permanently, but a loan with an option to buy for that amount would also be considered.

He still has two-and-a-half years left on his contract at the Wanda Metropolitano, but with no real space in the squad for him and Atleti wanting to sell after the arrivals of Diego Costa and Vitolo, there may still be a little bit of room left for negotiating the price down.

With so many clubs interested, getting a good price should be a formality.

Despite his poor form this season, Gaitán is a quality player who could shine in a mid-table side.

For a team like Swansea, who have struggled for goals this season, his creativity could be key what is going to be a difficult battle against relegation.

Everton could well make use of him out wide, although arguably they have similar players to him in Gylfi Sigurðsson and Davy Klaassen, and could be better suited to finding a more out-and-out winger for their squad.

His quality could be a real asset for West Ham and, if he played alongside Manuel Lanzini, the Hammers would have two high-quality creative outlets. Striker Andy Carroll would also thrive off his deliveries in the box.

Signing someone who’s barely played and is out of form is a risk. But Gaitán has a point to prove, and an impressive second half of the season in England could propel him into the World Cup squad.