Nice hosts Olympique Lyon in Round 11 of the French Ligue 1. We have a detailed preview of this game, including top free predictions for this match. Our Ligue 1 predictions also include top UK bookies with the best odds for every match we cover.

While Nice is fourth and Lyon is sixth on the Ligue 1 table, these teams have 16 points each. It sets the stage for a tough duel on matchday scheduled for Sunday 24th October 2021. Here are our best three predictions for this game:

Nice to get at least a point or win

Nice is our favourite team to win this game. But if they fail to do so, we don't think they will lose all points to Lyon. The hosts have leaked only 5 goals in nine matches while Lyon has let in 13 goals in ten games. Nice comes to this fixture with a game in hand and should, therefore, make the most of it. With 16 points shared across fourth, fifth and sixth spots, winning at home to widen the gap should be the main objective for the hosting coach, Christophe Galtier. Nice has 2W and 2D in two home games so far while Lyon has 1D, 1D and 2L in as many games. Lyon has looked troubled away from home. The best Lyon can get in this game is a draw.

Our second prediction backs both sides to find the net. The current positions of these teams on the Ligue 1 table put them in a pole position to compete for the top four places. The hosts have scored 17 while Lyon has scored 16 goals. They have had a good scoring record since the start of the 2021/22 season.

For more stats and the best odds, the tables below summarize top UK bookies with the best Nice vs Lyon odds.

Nice look to extend their unbeaten home record this season to five games. So far, the hosts have recorded 2W and 2D at the Allianz Riviera. Also, a review of previous encounters between these teams shows that this fixture has always been a close call. In the last 10 meetings, Nice had 7W, 3D and 10L. Last Season, Nice lost 4-1 at home against Lyon. They won the second meeting last season 3-2 and hope that can make it two wins in a row against Lyon. A big worry for Nice is inconsistencies that have become more manifest in the last five games during which they recorded 2W, 1D and 1L. Lyon comes to this game with a six-match unbeaten run of 4W and 2D. Both sides have 16 points, which sets the stage for a tough duel on matchday. 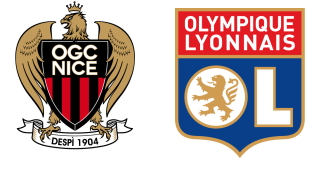 Brisard Jerome will referee this game.

Which stadium will host the match?

Allianz Riviera in Nice, France is the match venue.