Nice will host struggling Brest for the eighth match of the French Ligue 1 2021/22 season. We preview the big game and also provide our readers with the best free predictions and odds for the fixture.

Nice is ranked fourth after seven matches and could go second if they will this game because they have a game in hand. Brest is ranked 19th after eight games and will look to escape the red zone on Saturday. Our best three predictions for this fixture are as follows:

Nice are favourites to win

Since the start of a new season, Nice has set a precedence that they can compete for the Ligue 1 trophy. The hosts have bagged 4W, 2D and 1L so far and have a game in hand before this fixture. While they haven’t done so well at home, winning only once and bagging two draws so far, we think Nice will be too strong to defeat in this game. Brest has the 18th worst away record after 2D and 2L on the road this season and has not defeated Nice away from home in the last 13 meetings.

Nice to open the scoring

Brest has a weak defence and facing a stronger side in Nice should pose some worries for the visitors. The visitors haven’t failed to keep a clean sheet so far this season while Nice has five clean sheets in seven Ligue 1 games this season. The hosts should bag the first goal of the match in this fixture.

We don’t think there will be goals on both sides in this fixture.  Keeping five clean sheets in the first seven games this season pits Nice in the race for keeping more clean sheets this season. And with a home fixture against struggling Brest, the visitors should sweat for a goal in this game.

Nice is currently fourth on Ligue 1 table and hope to keep their good run going in this fixture. The hosts are 4th on the table after the first seven matches. They have lost only once and bagged 4 wins and 2 draws. Notably, Nice is yet to lose at home after three home fixtures of 1W and 2D. This match against struggling Brest presents Nice with a chance to bag another three points. The visitors have never defeated Nice away from home in the last 11 meetings. Moreover, H2H stats between head coaches of both teams shows that Nice head coach, Christophe Galtier boasts 7W against 2W for Michel Der Zakarian in 13 encounters. There have been four draws between the two coaches.

FAQs about Nice vs Brest Fixture 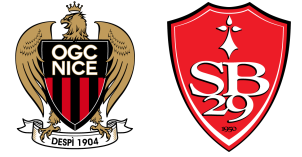 Where is the venue for this fixture?

What is the kick-off time for Nice vs Brest?

How did these teams fare against each other in the last meeting?

Nice bagged a 3-nil victory in the last meeting.