At 22:39 on Sunday night, Paris, one of the most electric, captivating and breathtaking cities in the world, stopped.

Neymar, Paris Saint-Germain’s star and world-record transfer signing, lay on the pitch, suffering the after-effects of rolling his ankle.

The slow-motion replay confirmed the damage, following a challenge with Marseille’s Bouna Sarr, the Brazilian’s right-ankle buckled under his weight as he landed.

Rather than hobble off the pitch, the 26-year-old was strapped to a stretcher and carried off. With 13 minutes to go, although PSG couldn’t make another substitution, it made little difference to the outcome of the match, but it could have catastrophic consequences for the rest of their season.

Although Unai Emery first suggested his star man would not miss the second leg against Real Madrid, further reports suggest the Brazilian will be out for up to three weeks.

Although they lost the title to Monaco last term, signing Neymar from Barcelona and adding Kylian Mbappé on an initial loan deal would all but guarantee the championship this season.

A 14-point lead over the side from the Principality will see the Parisians lift their seventh Ligue 1 crown, but domestic success was only supposed to be a side story to this campaign.

Ever since QSI’s arrival in Paris, one trophy has been the target. Winning the Champions League is their ultimate end game. Nothing else matters.

Signing Neymar and Mbappé was supposed to take the club to the next level, regardless of how capable coach Unai Emery was of masterminding their path to the final.

Losing 3-1 away at Real Madrid was never in the plan, but an away goal scored by Adrien Rabiot gave them a glimmer of hope.

“It's all well and good putting eight goals past Dijon, but it's in matches like this that you have to stand up and be counted,” a frustrated Rabiot said after the defeat.

Billed as “Neymar vs Cristiano Ronaldo” before the first leg, it was the Portuguese superstar who took control. Although he completed 13 dribbles, attempting 18, the former Barcelona forward only managed one shot on goal.

He was far from his dominating best and the press were quick to point this out in the days that followed.

“In a war there are those who feed off victories and those who, like vultures, feed off the carcasses of the defeated,” Neymar’s father posted on Instagram, in what was a cryptic defence of his son.

“We lost a battle but as for the war, we'll see, because it will last as long as we're on the field.”

Next Tuesday’s fixture was set up to be one of the most important in Neymar’s career.

He signed for PSG to make the difference, stepping out of Lionel Messi’s shadows in order to take over a team, find success and challenge Ronaldo and the Argentine forward for the Ballon d’Or.

Elimination at the last-16 stage of the Champions League will automatically end any talk of the Brazilian overtaking the more established duo, especially if it’s Ronaldo who has the greater impact in their duel.

In a sense, Sunday’s ankle injury could help the 26-year-old save face. Just like Brazil's 7-1 thrashing to Germany at the 2014 World Cup.

Failing to progress will not be his fault and it will be used as an excuse in order to build for next season.

However, all is not lost for PSG: they may be dressed up as a one-man-team, but in Mbappé they have the young pretender to the throne, a forward who has everything in his locker to become PSG’s match-winner.

Not to mention a certain Edinson Cavani who has 30 goals in all competitions this season. But someone has to create for the Uruguayan and part of that job will fall to the young France international.

Although there is no available expected goals (xG) data available for the Champions League, the 19-year-old Frenchman is just behind Neymar in terms of goals and assists. 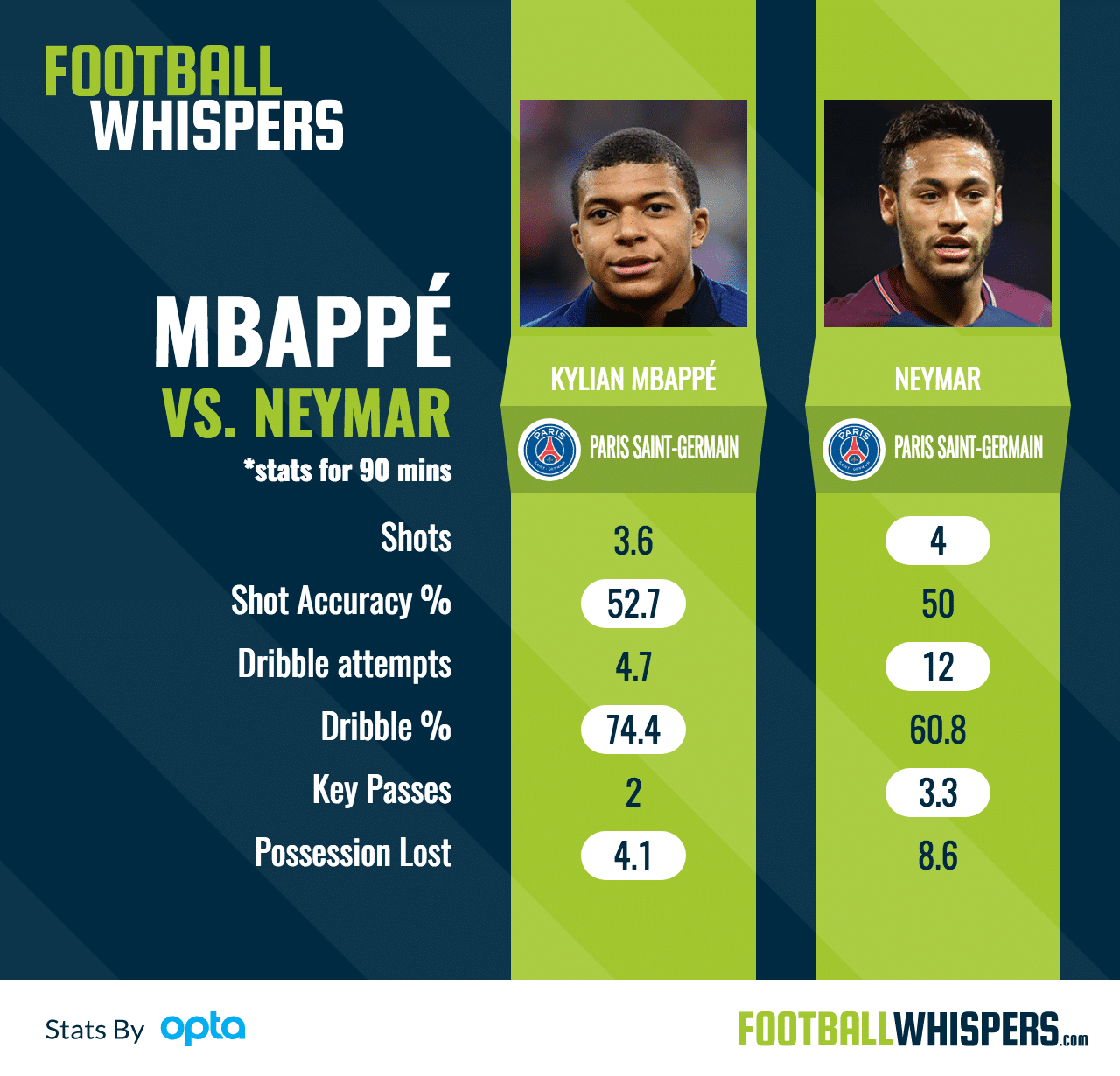 In seven games, he has combined to score or set up seven goals, compared to the Brazil forward's nine, and is just behind on 3.6 shots per 90 minutes, but with 1.9 of those finding the target, he is more accurate than Neymar.

Averaging 12 dribbles attempts per game, it’s clear to see who gets most of the ball in this PSG team. That’s not always a positive though, with just 60 per cent successful, he falls behind Mbappé in this category.

It’s no surprise that the former Santos youngster loses possession 8.6 times per 90 minutes, more than double the average of the teenager.

Losing Neymar is a huge blow, there is no doubt in that fact. And that is why there will be little to no confirmation of his absence until the last minute. PSG will keep their cards close to their chest for the next week and the Spanish side will be smart to keep a smile from their face.

“I do not like players injured,” insisted Zinedine Zidane when pressed about the news. “I’m not happy with Neymar’s injury. I hope he can be in the second leg. I will never want a player not to be injured.”

The whole of the Parc des Princes would be deflated if the Brazilian is ruled out, however, there is a train of though which says without him, this could inspire the club to their biggest team performance in PSG’s 48-year existence.

Failure to progress at this stage, regardless of the opponent will be a disaster. Yet, coming back to win, on the back of a huge performance from their other summer signing, would banish all memories of their collapse at the Nou Camp last year.

In Ligue 1, Neymar leads the way with an expected goals per 90 (xG90) rating of 0.83 and an expected assists per 90 (xA90) of 0.62, which guarantees he is involved in a goal every game and close to three every two games. An incredible return. 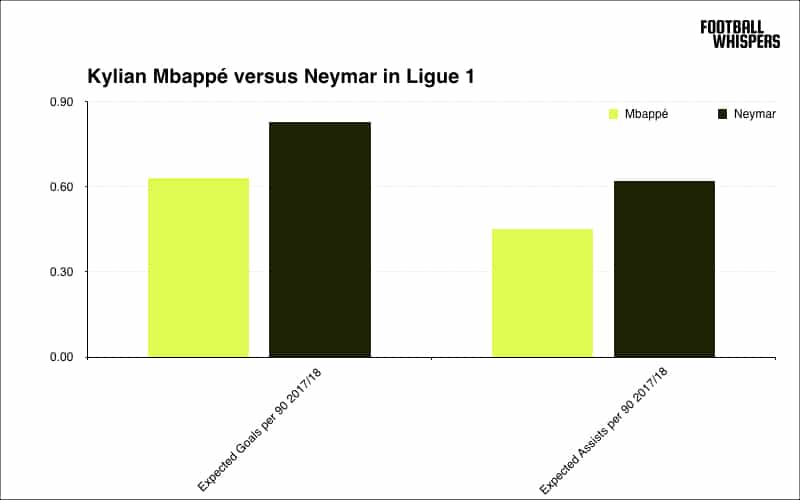 On the back of becoming the youngest-ever scorer in Le Classique on Sunday, opening the scoring against Marseille, he will be as confident as ever.

Perhaps many were expecting more from him this term, but with ten goals and eight assists in the league, playing under the pressure and bright lights of the Eiffel Tower, he has continued to thrive as one of Europe's hottest prospects.

Five years down the line, he could be the main attraction at this ambitious club, but next week, with Neymar a huge doubt, Mbappé may need to emerge from the shadows for one night only and elevate his status from the Prince of Paris to the King of France.