A glance at the La Liga scoring charts this season might give one the impression that Barcelona superstar Neymar is underperforming somewhat.

The 25-year-old Brazilian has found the net just eight times in the league so far this term, a tally which sees him level with the likes of Sporting Gijón’s Duje Čop and Las Palmas’ former Portsmouth midfielder Kevin Prince-Boateng.

A quick scan of the higher reaches of the table reveals that Lionel Messi occupies a familiar position at the top with 25 goals, while team-mate Luis Suárez is next with 21, and Cristiano Ronaldo third with 19.

Antoine Griezmann (14), Sergi Enrich (10) and Willian José (nine) are among the 13 players separating Neymar from his illustrious colleagues.

However, any notion that the former Santos man is somehow putting below par this season is wholly misguided.

In almost every other performance metric, many of which are much more nuanced than the basic counting of goals scored, Neymar is putting up some of the best numbers of his career to date. 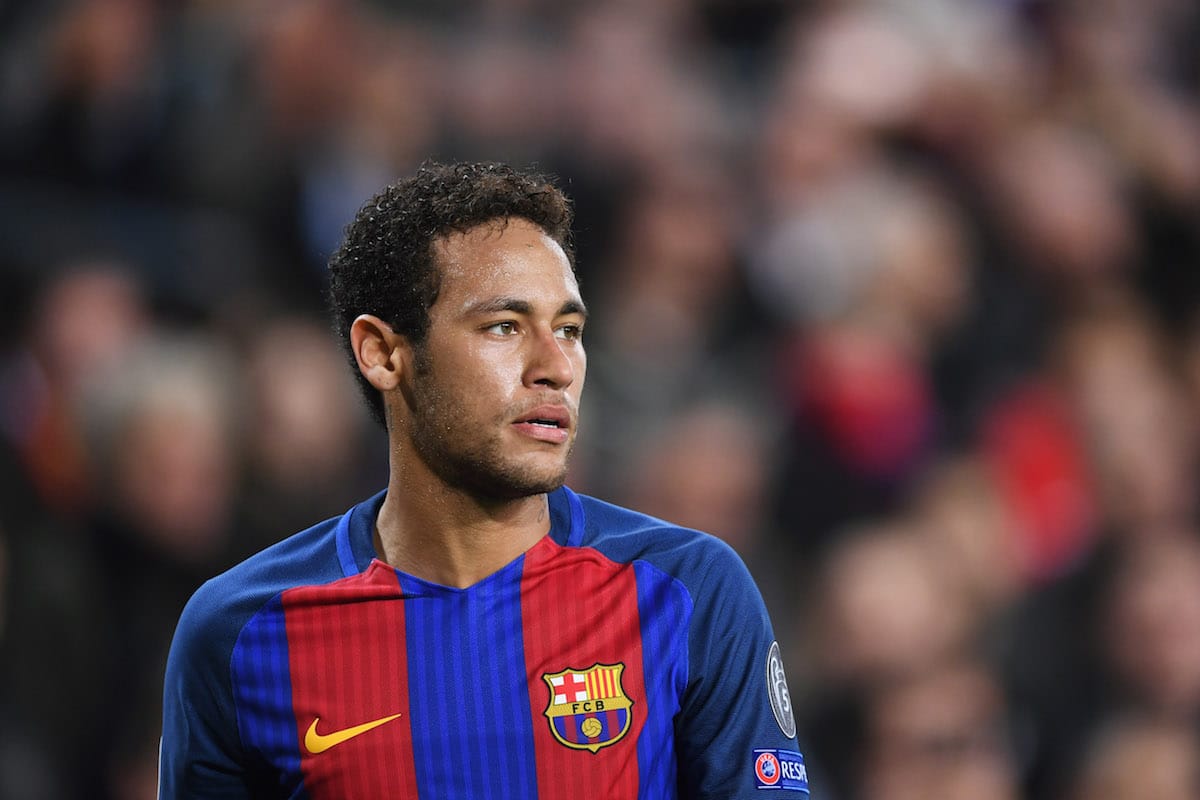 With 10 La Liga assists to his name, he is well on course to eclipse his previous high mark of 12 from the 2014/15 Treble season. Indeed, the Brazilian’s average of 0.4 assists per game is as high as he has ever produced since moving to Spain in 2013.

Neymar is also creating more scoring chances per 90 than at any point in his stay in Catalonia with 3.1. His previous best was three, while his current average is better than any of his Barça colleagues, putting him ahead of Messi (2.7) and Suárez (1.8). Of all the players in La Liga to have made more than 20 appearances this season, only Real Sociedad’s former Real Madrid star Sergio Canales has a better return (3.3), although 17 of his 21 outings have come from the bench, skewing his productivity slightly.

One of the most striking aspects of Neymar’s game has always been his mesmerising dribbling skills — few players in the world are able to beat an opponent as often and with as much panache as the Barcelona No.11. This term has been no exception: with 5.5 successful takes-ons per 90 minutes in La Liga, he is having far and away his most productive campaign in this area, with 2015-16’s average of 4.2 being his previous best.

Perhaps the most stark improvement in Neymar’s overall game this season has been his defensive contribution. The 76-cap Seleção star is often unfairly regarded as a “luxury player”, the kind of attacker who is a potential match-winner in the final third but needs to be accommodated for by making defensive allowances.

This was never the case; Neymar has always been hard-working and cognisant of his duties without the ball. But his contribution in this aspect of the game has increased and vastly improved in Luis Enrique’s side this term.

Neymar: No player has made more key passes than @neymarjr (71) in La Liga this season pic.twitter.com/Ru8xXfsv5e

Neymar’s 1.5 successful tackles per 90 minutes is his joint-best tally in any La Liga season, while the 2.7 tackles he is attempting per minutes in the Champions League, a career high figure, is evidence of his increased defensive responsibility.

He’s also making 0.4 interceptions per 90 in La Liga, which is as good a return as he has ever produced.

Neymar has always been one of the most fouled players in any competition he has played in – his one-on-one dribbling style often either outfoxes defenders thus drawing a foul, or frustrates opponents to the point where they cynically lash out. However, he is now winning more free-kicks for his team than ever before, with an average of 4.4 per game where his previous high was 3.8 from last season.

This may seem like a strange statistic to praise a player for but drawing a foul is an effective way to nullify the pressure an opposing team might be putting Barça under. Enrique’s men, with the likes of Messi, Suárez and Neymar himself, also boast some of the finest dead-ball exponents in the world, so free-kicks become another avenue for chance creation.

The reason for most of Neymar’s statistical improvement, as well as his lack of goals, is due to the change in role he has undergone this season.

Earlier in the campaign, Barça were lining up in their traditional 4-3-3 formation with Suárez, Messi and Neymar making up the front three.

However, Messi was drifting further and further infield from his right-wing starting position, pushing closer to Suárez, effectively forming a front two. To compensate, the midfield trio would shift over to the right, with Ivan Rakitić often playing as more on a right-midfielder than an interior, and Neymar staying wide, tucking slightly deeper on the left.

Following the humiliating 4-0 defeat to Paris Saint-Germain at the Parc des Princes in the first round of their Champions League last-16 tie in February, Barça switched to a 3-4-3 system, with Messi now playing at the point of a midfield diamond. 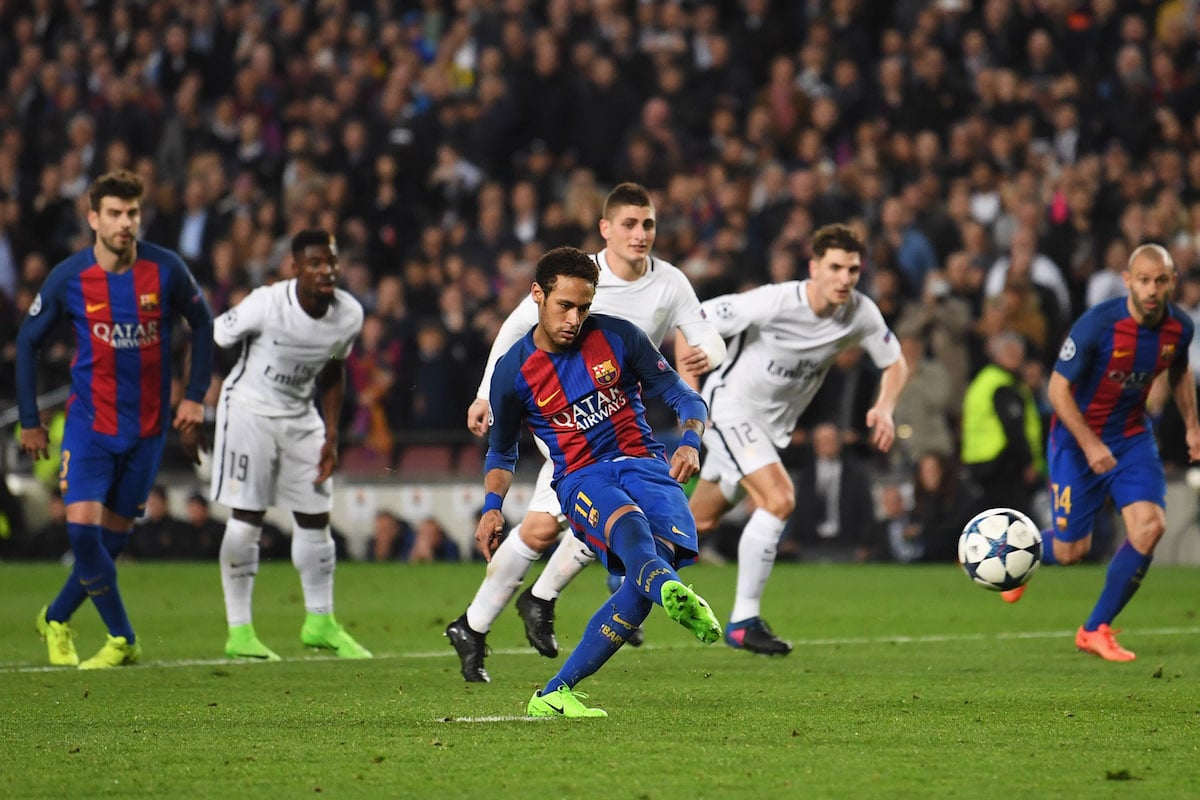 The absence of wing-backs in this formations means that Neymar, as one of the wide attacking players, is tasked with providing width from the left flank, staying much closer to the touchline and moving inside far less frequently. He is also required to track back and offer protection to the back three from this position, again a consequence of having no wing-backs.

To many, this might seem like a waste of Neymar’s attacking gifts, but anyone who witnessed his other-worldly display in the miraculous second-leg comeback against PSG last month will beg to differ.

Neymar was Barcelona’s chief orchestrator, scoring twice and assisting the eventual winner in the 6-1 triumph. But it was his work rate and refusal to accept defeat which set the tone for the unlikely remontada and gave hope to the 98,000 fans inside a rocking Camp Nou.

In an age in which Messi and Ronaldo are producing never-before-seen goal tallies season after season, it would easy to use that most simple of metrics as the determining factor when assessing an attacking player’s output. But Neymar has shown this term that he is capable of so much more than simply putting the ball in the net.