Riyad Mahrez is rather fortunate.

Most £60million signings are under pressure. Every pass analysed, every shot under the microscope, and every shrug of the shoulders dissected on Match of the Day by wannabe body language experts.

But playing for arguably the best team in Premier League history has perks away from winning trophies.

The pressure to deliver isn’t quite as intense. Raheem Sterling, Bernardo Silva and Leroy Sané all produced high-quality performances playing in Mahrez’s favoured position last term, so the former Leicester City man often had to settle for a place on the bench.

His missed penalty at Anfield in the 0-0 draw ultimately didn’t matter, as City pipped the Reds to the title by a single point. He did, though, round off his debut campaign on a high with a goal and assist on the final day win at Brighton which clinched the title.

Despite the seven goals and four assists in just 1,337 minutes in the Premier League, Mahrez’s 2018/19 season was far from a success, at least on paper. The Algerian struggled to force his way into Pep Guardiola’s XI and when he did get a chance he failed to impress.

For the first time since 2013/14, Mahrez didn’t appear in a minimum of 2,000 English top flight minutes. But then wasn’t this always the plan? Mahrez, for all of his brilliance at Leicester, wasn’t signed to be a starter for Guardiola. He was signed as a squad player.

And this is why judging him isn’t like judging other £60million signings.

He was bought to add depth to the attacking ranks at the Etihad and he did just that. While he may have not been a constant performer, he did step up to deliver important contributions.

He struck the winner against Tottenham Hotspur in October and had a hand in both goals during the 2-1 victory over Watford in December. Without those points, City don’t claim the Premier League title for a second successive season.

But will a bit-part role be enough for Mahrez moving forward?

The answer is out of his hands as his future could be tied to that of Sané's. If the former Schalke man does join Bayern Munich then Mahrez won't be leaving.

Even if the German international does stay, it's difficult to envisage a scenario that allows the 28-year-old to move. 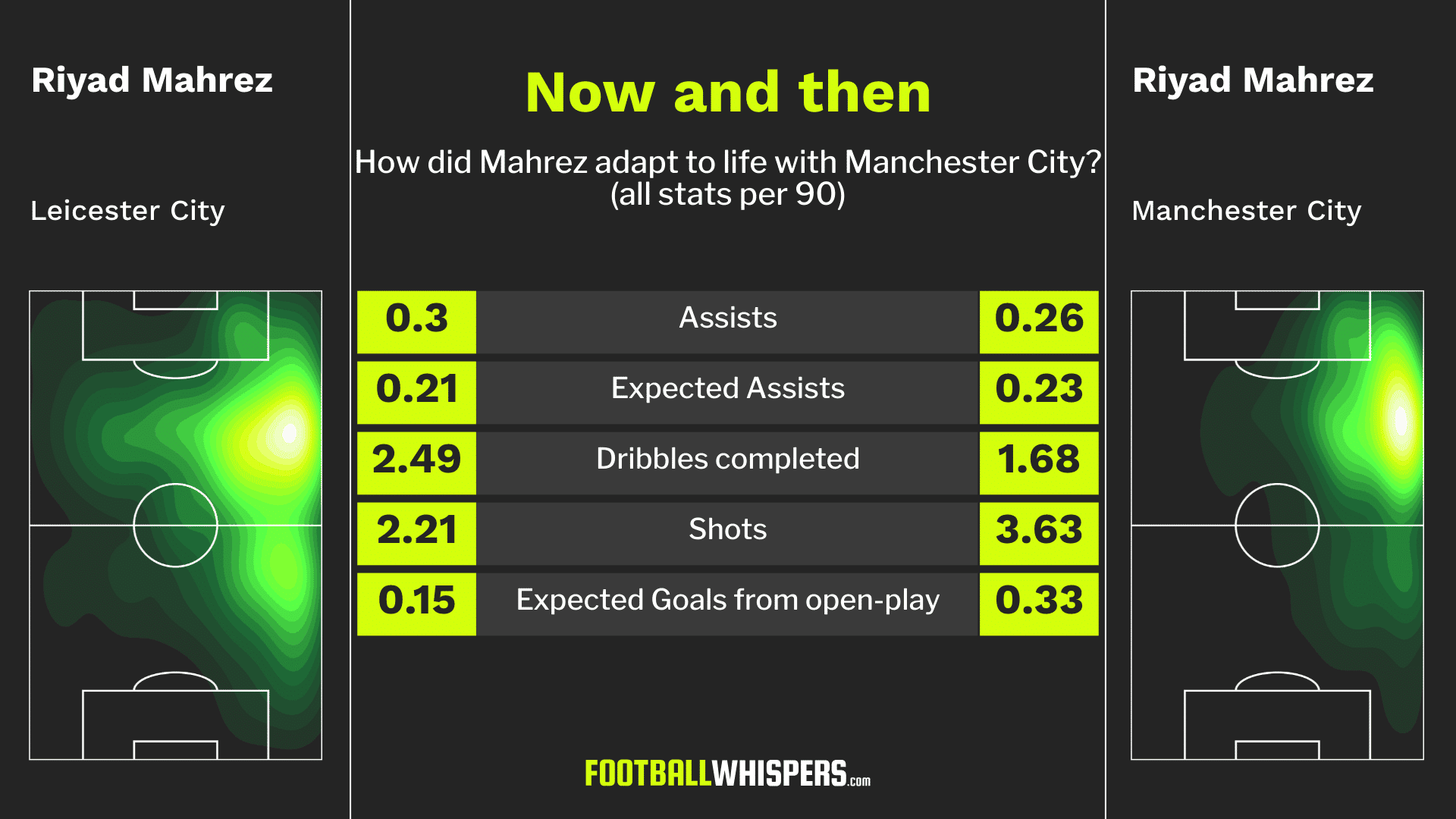 City aren't going to recoup £60million. It's difficult to see them getting close to that figure on current form. And why would they want to take a hit on a player who does have an impact for them?

It's just unfortunate for Mahrez that the way City play doesn't suit his strengths. He's been shackled somewhat since the move to the Etihad, as evidenced in the graphic above.

At Leicester, the Algerian was the creator-in-chief. The man who made things happen. He was given the license to roam, encouraged to be an individual. The heatmap shows that, though he started on the right, he would drift in and influence the game from central areas.

At City, he isn't allowed to. While his output on a per 90 average has increased, it comes at the expense of his individualism. He's attempting, and completing, fewer dribbles. He's also playing fewer progressive passes, with just 16.4 per cent of his passes going forward compared to the 30 per cent he averaged last season. 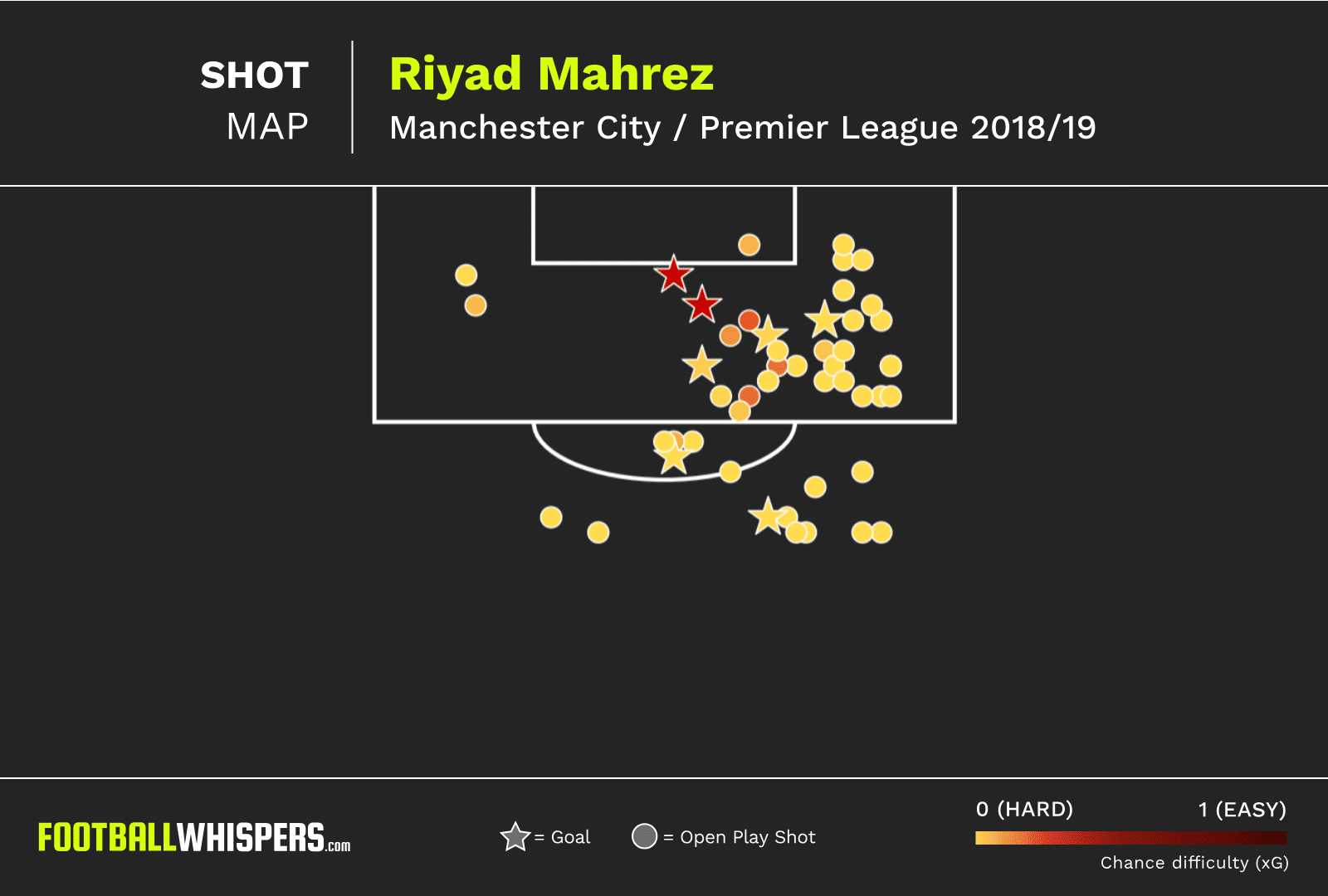 It was a key part of his game at the King Power Stadium and one of the reasons he was courted by many of Europe's elite. But at City, the wide forwards are expected to keep the width unless the ball is on the opposite flank.

Sterling hugs the touchline. Sané gets paint on his boots on the left side. Mahrez's involvement from the right clashes with how the attackers are usually deployed.

Guardiola wants his team to create space centrally, so the No.26's insistence to cut inside and dribble muddies the usually clear waters.

Mahrez is an ideal impact substitute, just a very expensive one. But to a club like Man City, the price is irrelevant.

He's going to continue to do a job for the Premier League champions, he'll just be a different player to the one fans witnessed at Leicester.