Golden Boy status is as impermanent as it is glamorous.

In 2014, James Rodríguez had the footballing world at his feet. The Colombian had just scored six goals to scoop the Golden Boot at the World Cup and completed a £63million move to Real Madrid.

Catapulted into superstardom at 22, his path since has been an intriguing one.

There have certainly been reminders of his talent; in August 2015, he scored two spectacular goals in a 5-0 defeat of Real Betis. But there has also been inconsistency and injuries – as per Transfermarkt, he missed 38 games during three seasons in the Spanish capital.

Carlo Ancelotti was a fan. Real boss when James arrived in the Spanish capital, the Italian jumped at the chance of securing his' services on loan when in charge at Bayern Munich.

The former Porto and Monaco playmaker had become a bit-part player under Zinedine Zidane at Real, his peripheral status confirmed by the Frenchman leaving him out of the squad for the Champions League final.

Having made only 13 La Liga starts and been outshone by Toni Kroos and, later, Isco, the South American plumped for Bavaria in his quest for regular first-team football.

His spell at the Allianz Arena started inauspiciously. An injury sustained during pre-season saw him struggle during the opening weeks of the season and, ironically, it was Ancelotti's dismissal in September 2017 that triggered a return to form.

James thrived under Jupp Heynckes, finishing the Bundesliga season with seven goals and 11 assists as Bayern retained their crown. James warmed to Heynckes, who described the player as a ‘godsend'. The chief creative cog in the veteran coach's side, the Colombian created more big chances than any other player in the league. Lost in the shadows at Madrid, James had been reborn in Germany.

His relationship with Niko Kovač, however, has been more complicated. Despite a solid start to the campaign which included goals against Bayer Leverkusen and Schalke, the 27-year-old has, once again, spent a large chunk of his season on the bench. He has started just 13 Bundesliga games this season, which makes his return of seven goals impressive.

Three of those came in March's 6-0 demolition of Mainz but he has fallen out of Kovač's favour since. Hooked off at half-time during the pulsating 5-4 DFB Pokal win over Heidenheim, he was an unused substitute in Bayern's biggest game of the season; a crunch title showdown with Borussia Dortmund.

Three late cameos since have led to suggestions that he does not want to stay beyond this summer. 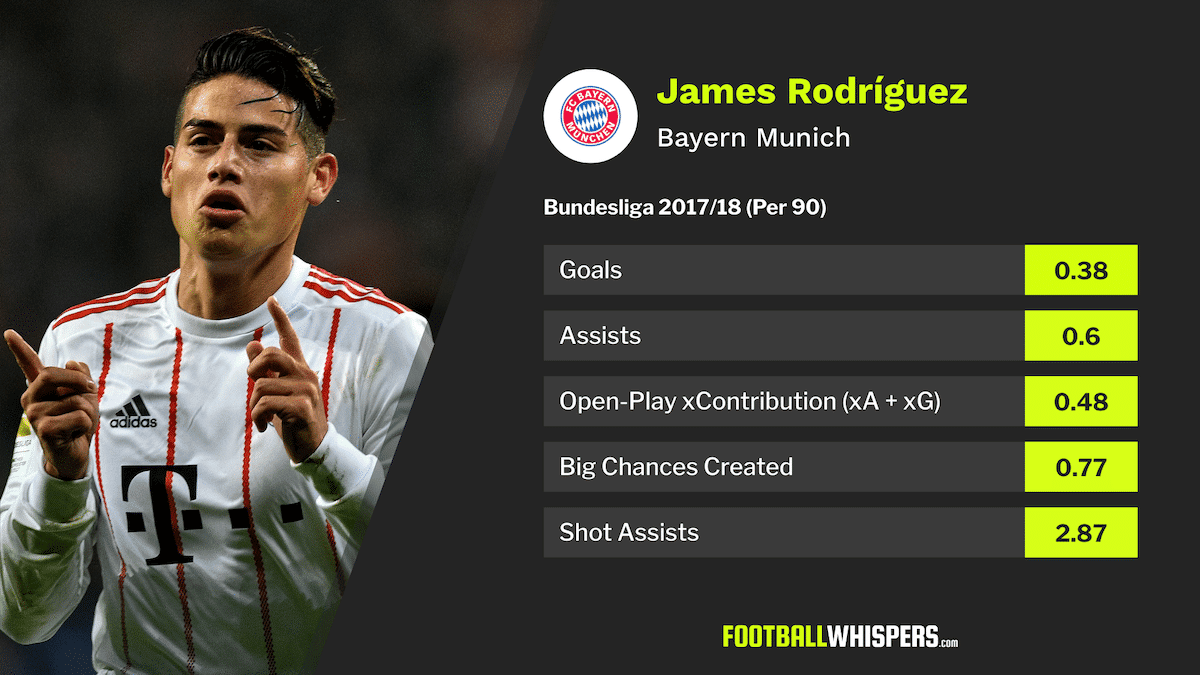 Of course, returning to Madrid no longer seems like the right move given Zidane's return to the dugout.

So, what next for James?

Certain potential suitors spring to mind. According to Bild, Paris Saint-Germain is an option – the French club would demand James if Neymar was to join Real Madrid.

A move to the Parc des Princes is desirable for a number of reasons. It would offer him the chance to play with the likes of Kylian Mbappé and learn under Thomas Tuchel, one of the most respected coaches in Europe. He is likely to pocket hefty wages and even likelier to add a few trophies to his trophy cabinet.

However, at 27, a return to Ligue 1 perhaps wouldn't be the most inspiring move.

Juventus have also been linked, which would reunite him with Cristiano Ronaldo. The Bianconeri are ready to welcome Aaron Ramsey to their ranks and, with Douglas Costa, Federico Bernadeschi, Juan Cuadrado and Paulo Dybala already there, competition for a starting berth would be fierce. 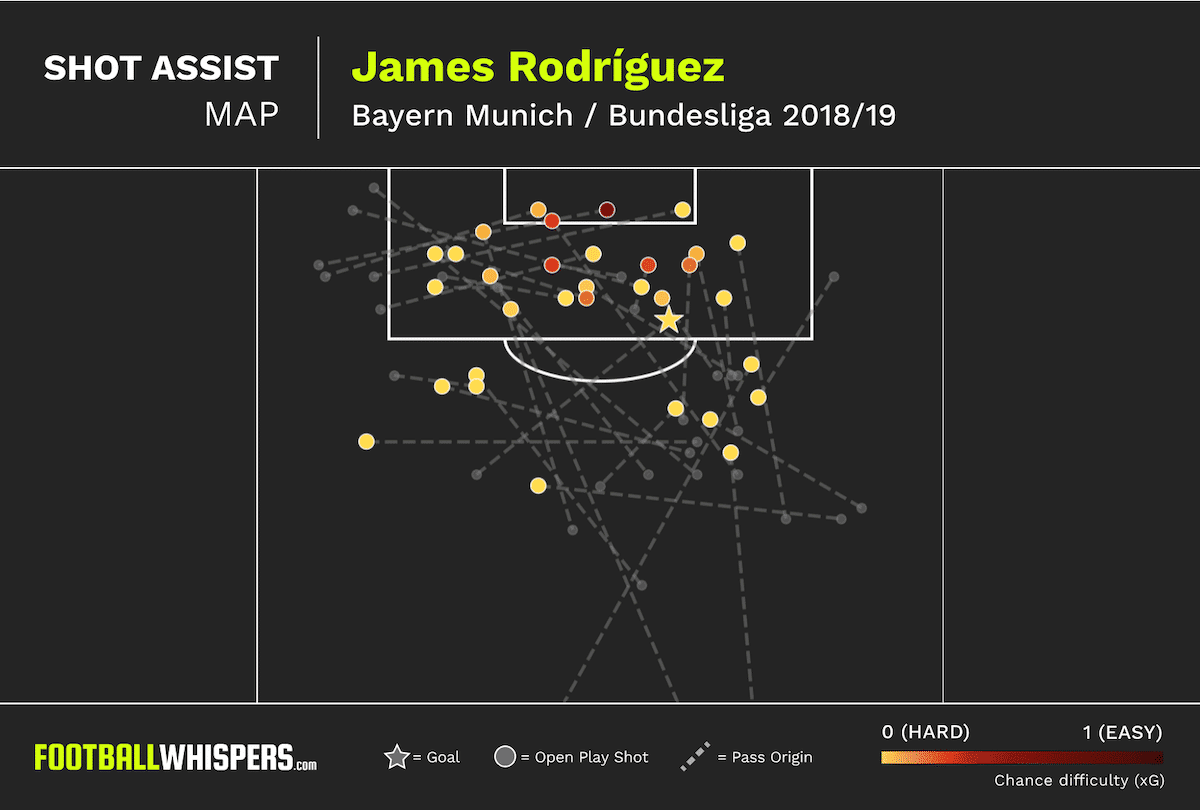 Despite Ancelotti's presence, a switch to Napoli seems unlikely while there has been little talk of him joining one of the Milan clubs.

A move to the Premier League would be exciting. Arsenal and Manchester United have been linked in the past and, while the latter cannot offer him Champions League football next season, they are likely to be able to match his wage demands.

Given he is capable of playing through the middle or on the wing, James remains an attractive proposition for the top clubs in England and, despite a seemingly unproductive season under Kovač, he has managed to register some impressive stats. 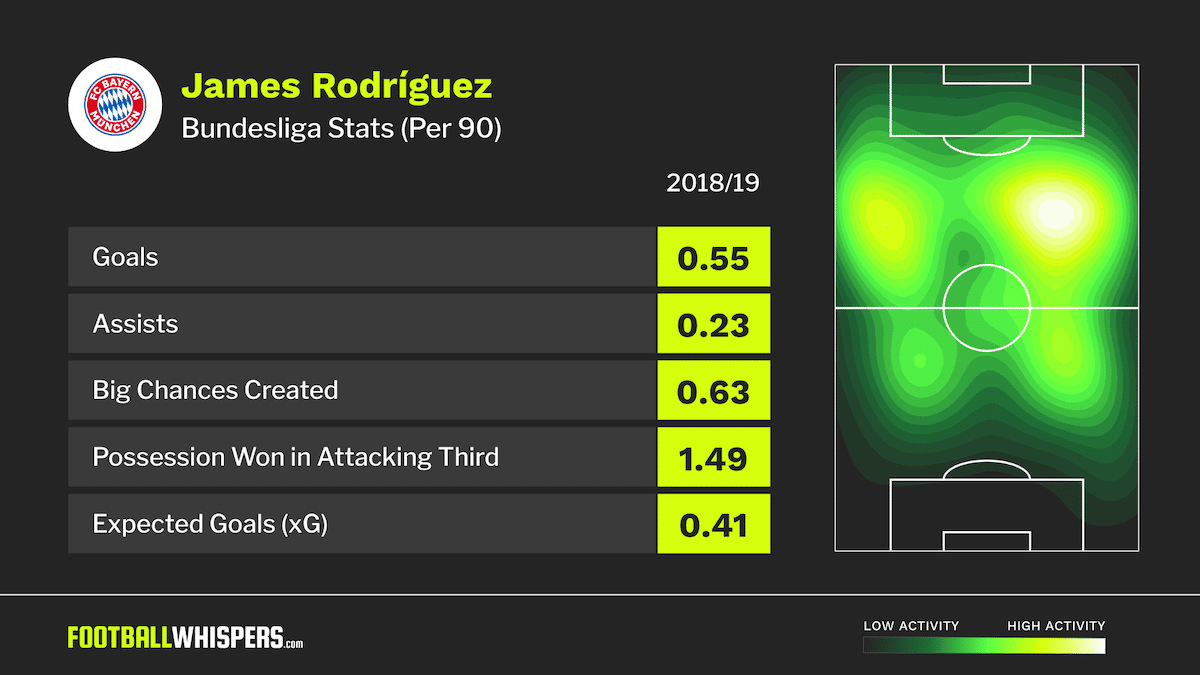 Clearly, he's doing something right and while his future may not lie with Bayern, clubs should be queuing up for James' signature this summer. An elite creator with a penchant for the spectacular, it's curious that he seems to be such an acquired taste: Ancelotti and Heynckes were keen on him, Kovač and Zizou less so.

With regular game-time, he can be deadly. There is no doubting his talent; whether clubs want to meet Real's asking price with his injury history, though, is a different matter.