Newcastle United have suddenly become one of this summer's biggest players in the transfer market. And all it took was the arrival of Steve Bruce.

This week the Magpies completed the signing of Joelinton from Hoffenheim for a club-record £40million. They have also been linked with a £20million move for Nice winger Allan Saint-Maximin while Hull City's Jarrod Bowen is also a target.

It's hard not to wonder what Rafael Benítez, who left Newcastle earlier this summer after his contract expired, makes of this sudden ambition from the Newcastle board – although it might just be sheer desperation.

Either way, it is almost certainly a knee-jerk reaction to the Spaniard's departure. An acceptance that without squad investment and a coach of Benítez's calibre, the Magpies were destined for relegation from the Premier League

So Mike Ashley will sign players for Bruce in the hope the former Sheffield Wednesday boss can ensure the Magpies retain their top-flight status and, in the process, guarantee another £100million-plus windfall in television revenue next summer.

The latest player linked with a move to the North East is Vasco da Gama's Marrony, who has also attracted the attention of Portuguese giants Porto and Sporting.

According to Brazilian outlet Globo, Newcastle lead the race for the versatile forward after head of recruitment Steve Nickson travelled to Rio de Janeiro to not only watch the 20-year-old in action but also hold talks with the Brazilian club over a potential deal.

Marrony has a buyout clause in his contract of around £30million, a significant fee for a player with fewer than 30 Campeonato Brasileiro Série A matches to his name.

Yet Vasco, who sit three points outside the relegation zone, are in financial strife and could be willing to sell for a far more modest £11million, according to reports.

That fee wouldn't scare off even the most financially prudent of Premier League sides. So is Marrony worth it?

He is yet to score this season for Vasco and has just the single assist to his name in ten top-flight appearances. As headline numbers go they are hardly inspiring.

Delve a little deeper, however, and there is evidence to suggest Marrony is a victim to the Gigante da Colina's struggles. 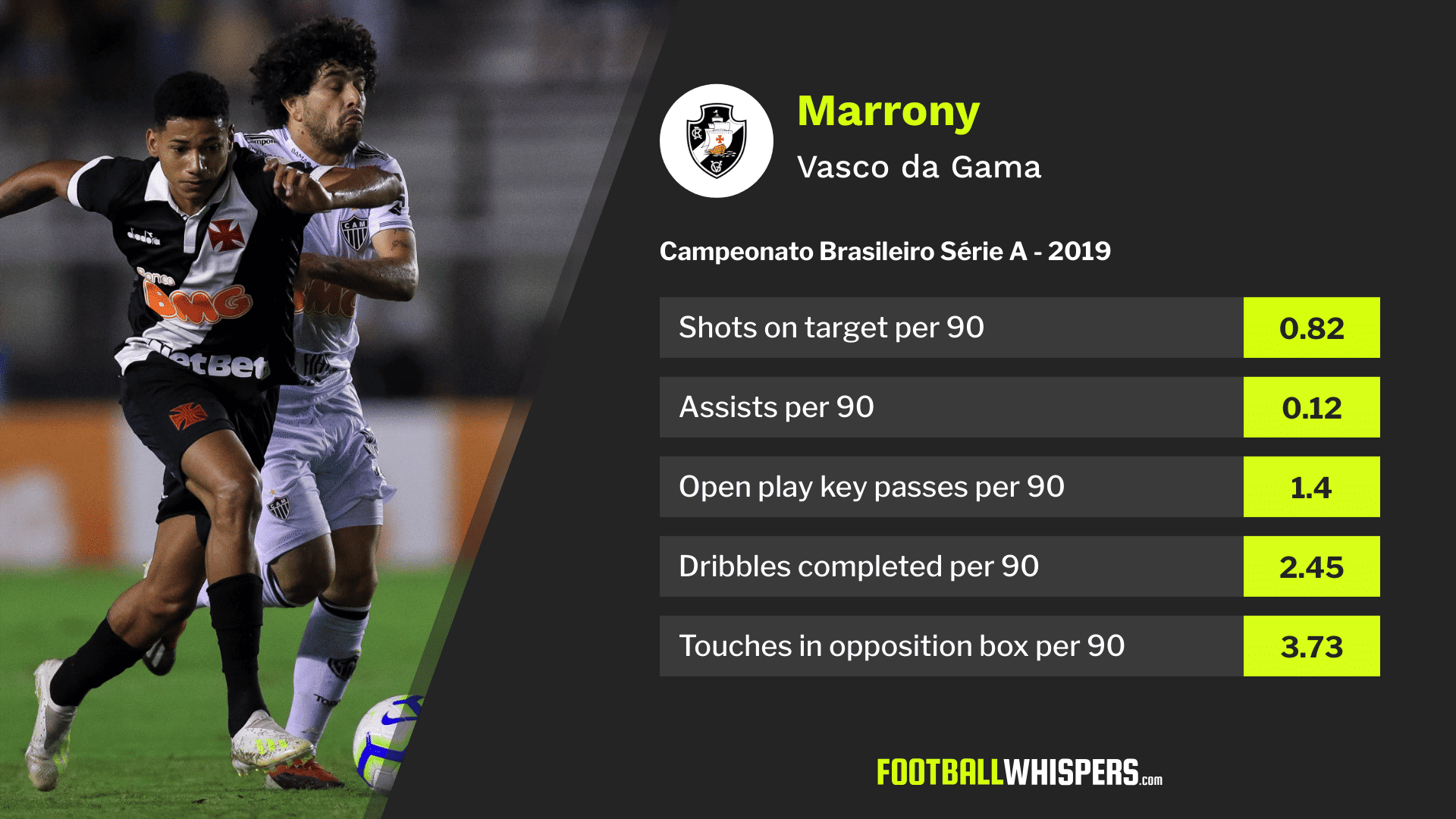 His 2.45 completed dribbles per 90 this season is the fifth-highest figure among attackers in the Brazilian top flight and testament to his ability to carry the ball forward in wide areas. He is also tenth for open play key passes per 90 and 23rd for Big Chances created per 90 (0.23).

That creativity with the ball highlights why Vanderlei Luxemburgo has predominantly used Marrony on the left of a front three. However, the youngster has also been deployed as the central striker this term.

At 6ft Marrony is capable of leading the line and is effective in the air – he wins 2.44 aerial duels per 90, the 19th highest number among attackers in Brazil. But his output in terms of shots per 90 (0.82) and touches in the opposition area per 90 (3.73) are bettered by 30 of his contemporaries and must improve.

But when Luxemburgo has opted to use Marrony through the middle, it is because of his work out of possession. He ranks second for interceptions per 90 (0.93) and is inside the top 15 for tackles won per 90 (1.51). Add in his 8.86 defensive duels won per 90 and it's clear Marrony is prepared to sacrifice himself for the good of his side.

“I have worked a lot,” the Brazilian told Odia earlier this month. “With the help of the whole team and the coach, I have been gaining more confidence and been given more opportunities. It's been very good.”

Marrony is far from the finished article. He is raw but an undoubted talent; a skillful creator who can double up as an effective lone frontman. For his own development, remaining in Brazil until the summer of 2020 would be best. But Vasco need to sell and Newcastle have the money to buy.

It would be an £11million gamble on the part of the Magpies, but one which could pay off handsomely.