Rafa Benítez’s Newcastle side sit fourth in the embryonic Premier League table after recovering from an unlucky opening day defeat to Tottenham.

Their first game back in the top flight will have gone down as an anomaly for the Spanish manager who lost two players to injury in the first half and then saw Jonjo Shelvey sent off for an unnecessary and petulant stamp on Dele Alli at the start of the second.

In their next game they lost again, but this time in a more disappointing fashion to fellow promoted side Huddersfield Town.

It’s at times like these that the tensions between the manager and the club’s hierarchy, which are always simmering below the surface, begin to rise. But Benítez dismissed the idea that his previous concerns with lack of movement in the transfer market affect the mood at the club.

“If we win games, I will be happy. Everyone was very excited [after promotion] and we were working very hard trying to be ready for the new season,” he said.

After Newcastle’s disappointing start, the happiness returned as they were able to win their next three games against West Ham United, Swansea City, and Stoke City.

They were dumped out of the League Cup by Nottingham Forest, but that removes an unwanted distraction as they attempt to settle down in the Premier League.

Despite their upturn in form during the past few games, there will still be one aspect of the side’s play which is worrying Benítez, and possibly some fans too, and that’s their inability to string passes together. 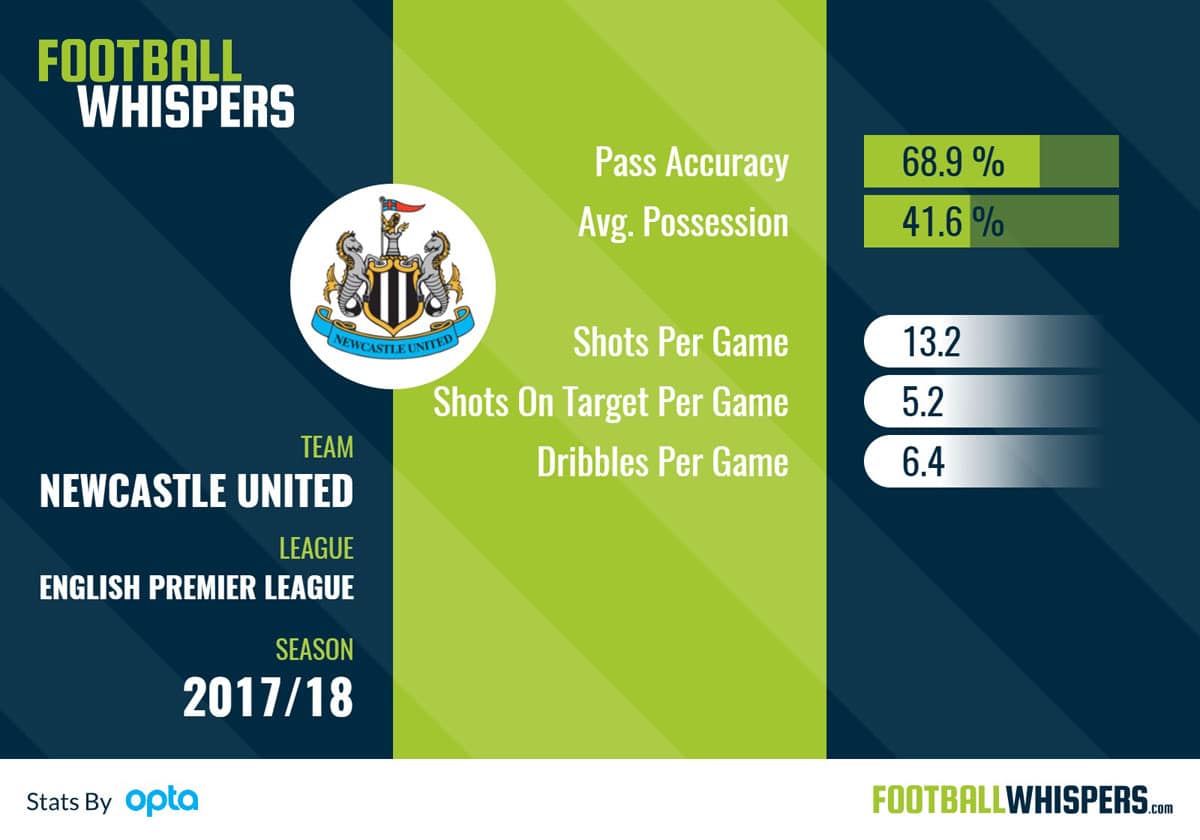 They are the worst side in the league when it comes to pass completion with an average pass success of just 69 per cent, and no player in the side who has played more than 90 minutes of football has completed more than 76 per cent of their passes.

And the player with this 76 per cent pass accuracy, leading the way for Newcastle in this particular area, is centre back Jamaal Lascelles – a damning indictment of the club's midfield players.

Isaac Hayden is the best of the central players with 75 per cent, but as a player who operates in a holding role he should be looking for something closer to 85 or even 90 per cent.

And though Mikel Merino has impressed on his introduction to the side, he will be hoping to tidy up his midfield play as the season progresses as he currently finds his target with just 74 per cent of his passes.

Merino pings the odd long ball too, trying over seven per game with an accuracy of 46 per cent, but Newcastle are far from a long ball team.

They are 12th in the league in terms of long balls per game, with 64, seeing the likes of Tottenham, Everton, and West Ham ahead of them in the long ball table. But the Magpies are second from bottom when it comes to the amount of short passes completed per game, with 249, just ahead of West Brom’s 240.

This poor passing accuracy has naturally led to less control of possession, and they are third from bottom in the league when it comes to average possession per game with just 41.6 per cent.

The screenshot below from their 2-1 win against Stoke shows the start of a passing move which peters out, as many of their moves which begin in midfield tend to do. 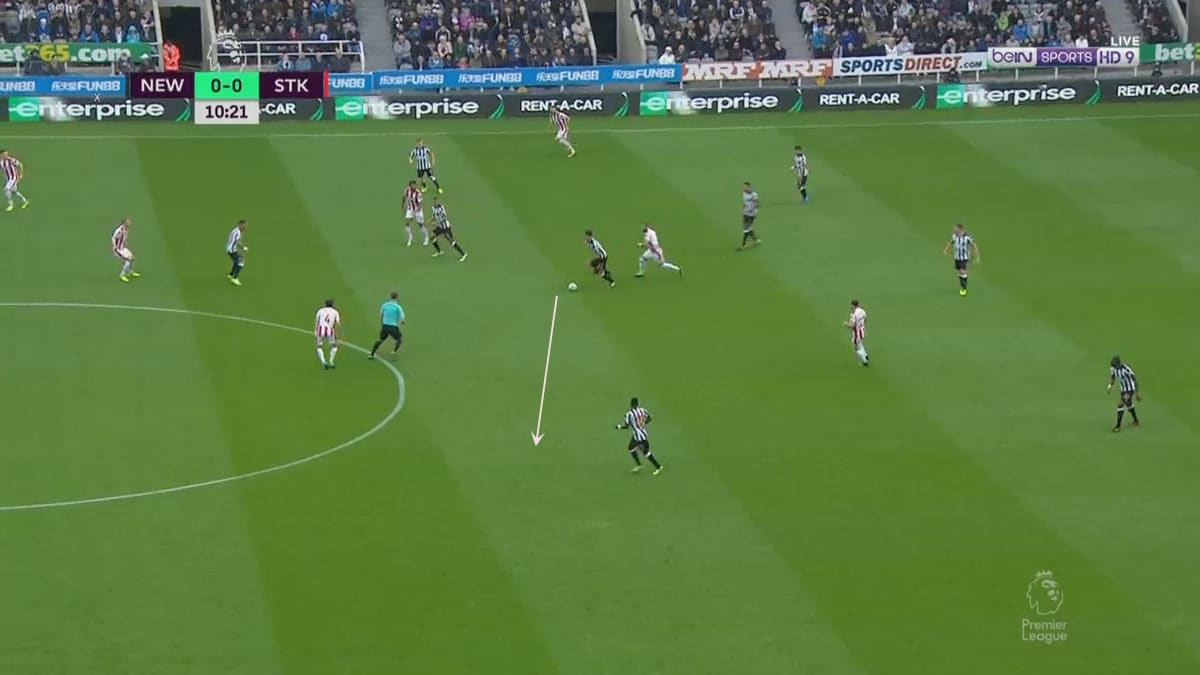 Christian Atsu is the open man, and receives a pass into his path, but once he accelerates past the opposition midfield he has very few options and ends up trying to find striker Joselu with a hopeful ball which doesn't come off. 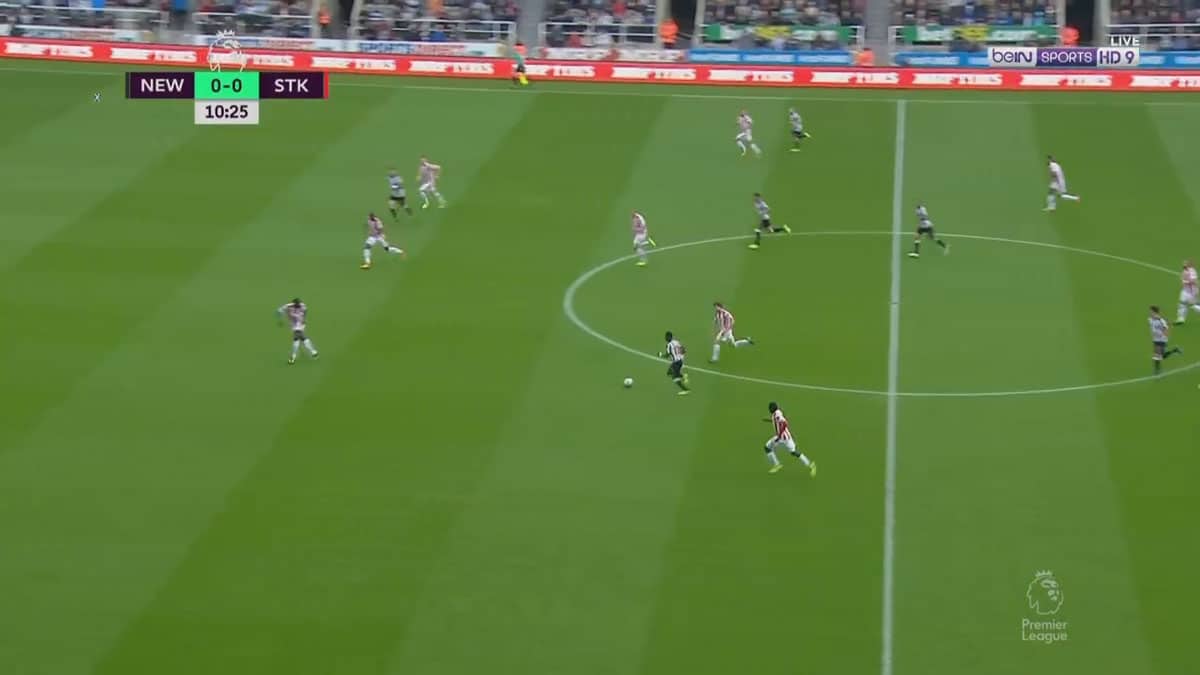 However, despite their apparent inability to string passes together in midfield, the team are still creating chances and getting plenty of shots on goal. They are sixth in the league for average shots on target per game, with just over five.

So maybe on the odd occasion a pass, such as Atsu's, gets to its intended target they are producing chances for the side.

If they had an attacking midfielder or striker who dropped into space and held the ball up, maybe they would find even more success in the final third. Or perhaps the speed of their attacks in the current setup, despite the regular loss of ball, is what is allowing them to get shots away,

Judging a team on five games alone isn’t fair, and it’s not a big enough sample size to read too much into the data. But it might be an early warning about something which will need to be monitored by Benítez and his staff as the season progresses.