Strikers at Newcastle United are a special breed. Whenever a new one arrives at St James' Park Magpies fans are desperately hopeful they will become the new Alan Shearer or Jackie Milburn. More often than not, they are left disappointed.

The latest forward linked with the Tynesiders is Porto striker Vincent Aboubakar with reports suggesting the 25-year-old is in advanced talks over a switch from the Portuguese giants.

Striking competition is badly needed as Rafa Benítez's side prepare for their Premier League return with Dwight Gayle the only forward to hit double figures last season.

With that in mind we've run the rule over Aboubakar and looked at how he might find into Benítez's plans.

Aboubakar's is a name which has been on the radar for several years now. The Cameroonian forward, owing to his impressive physical attributes, is a favourite of the FIFA gaming community with his blend of pace and strength desirable.

He was a Arsenal transfer target in 2015 after bagging 16 in 33 starts for Ligue 1 side Lorient in 2013/14 while Everton and Crystal Palace have been linked more recently.

Born in Yaoundé, Cameroon, Aboubakar began his career nearly 1,000km from home at Coton Sport FC de Garoua. He was elevated to the first team for the 2009/10 season as a teenager.

After a handful of appearances for Les Cotonniers he got his big move to Europe, joining French side Valenciennes. He made his Ligue 1 debut as a substitute on the opening day of the 2010/11 season in a goalless draw against Nice who included Loïc Rémy in their starting XI.

Aboubakar's first season in French football was not an unqualified success. He finished with just four league starts and a single goal to his name. But things improved the following year and he managed six from 25 Ligue 1 starts.

But after finding himself in and out of contention with Les Athéniens he moved to Lorient. There things clicked into gear and after bagging 17 times in 37 league starts Porto bought a 30 per cent stake in the forward for €3million. 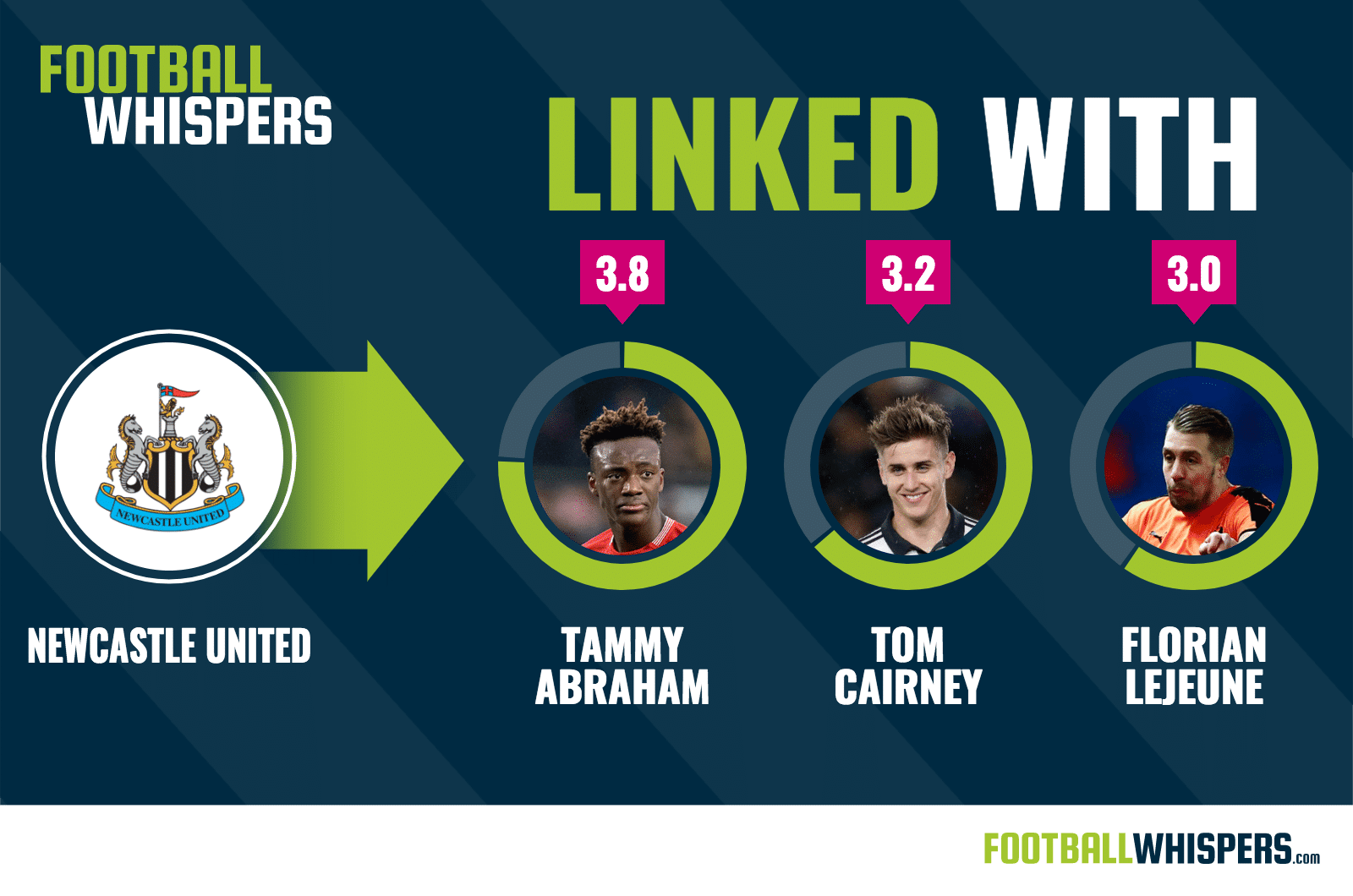 That form saw him join Turkish Super Lig side Beşiktaş on loan for the season for a shade over £2million with the option to make the move permanent. He scored 19 times in all competitions, helping the Kara Kartallar win the league and reach the Europa League quarter-finals.

What would Aboubakar bring to Newcastle?

If Aboubakar joins Newcastle he will arrive ready-made for the Premier League. His physicality sets him apart and means he will not be bullied by veterans of the English top flight. Furthermore, he knows just how to exploit his physique.

In the image below, taken from Cameroon's recent African Cup of Nations qualifier against Morocco, he uses his strength to hold off the opposing defender. As the ball comes out of orbit Aboubakar spins cleverly before accelerating away to put Cameroon ahead. 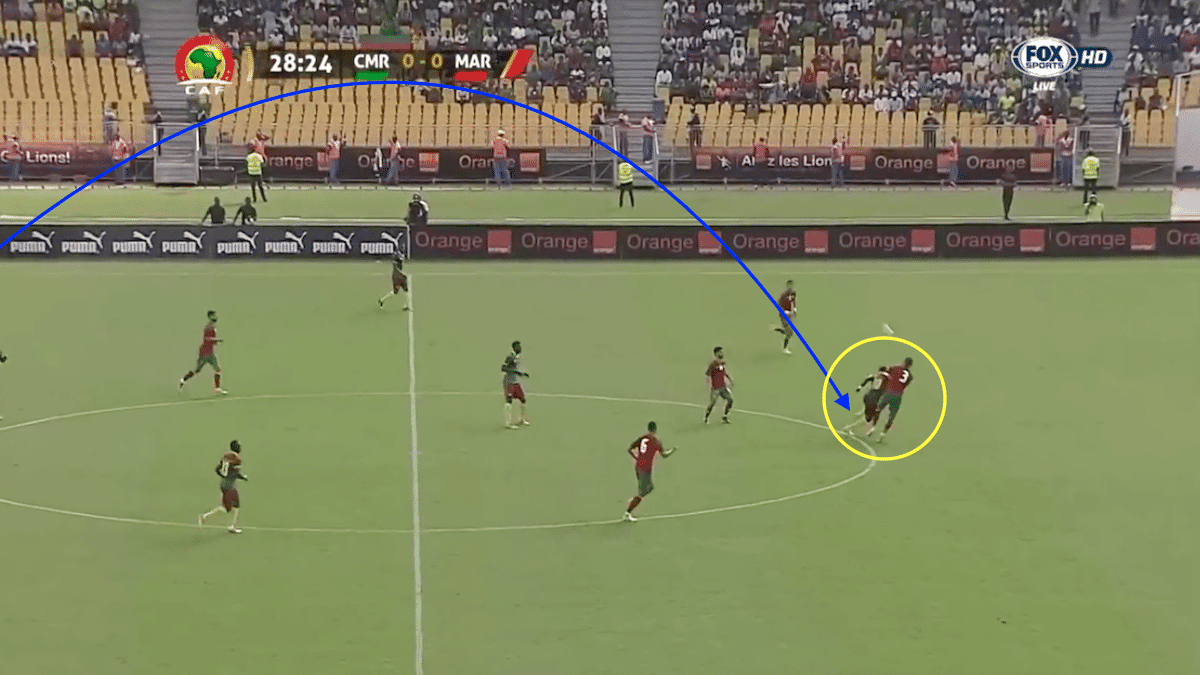 There is more to Aboubakar's weaponry than just bullying defenders with his pace and power. His movement is also very dangerous, as demonstrated in the image below.

The ball is played forward to former Arsenal youngster Oğuzhan Özyakup and, at that stage, Aboubakar is barely jogging. But he holds his run and finally breaks into a sprint where the red cross is marked.

Despite his size, the Cameroonian manages to arrive in the penalty area unnoticed and meets Roma transfer target Özyakup's low cut-back to tap into an empty net. It's a trick he has repeated time and time again this season, not dissimilar to current Newcastle No.9 Gayle who has similar poacher's instincts. 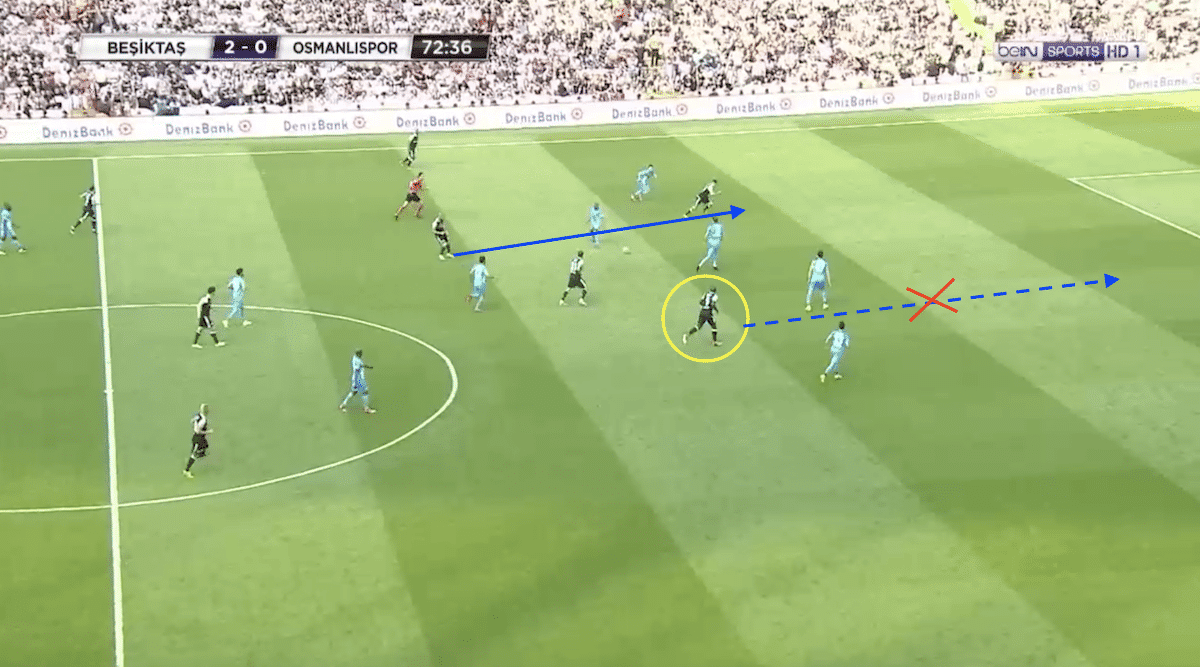 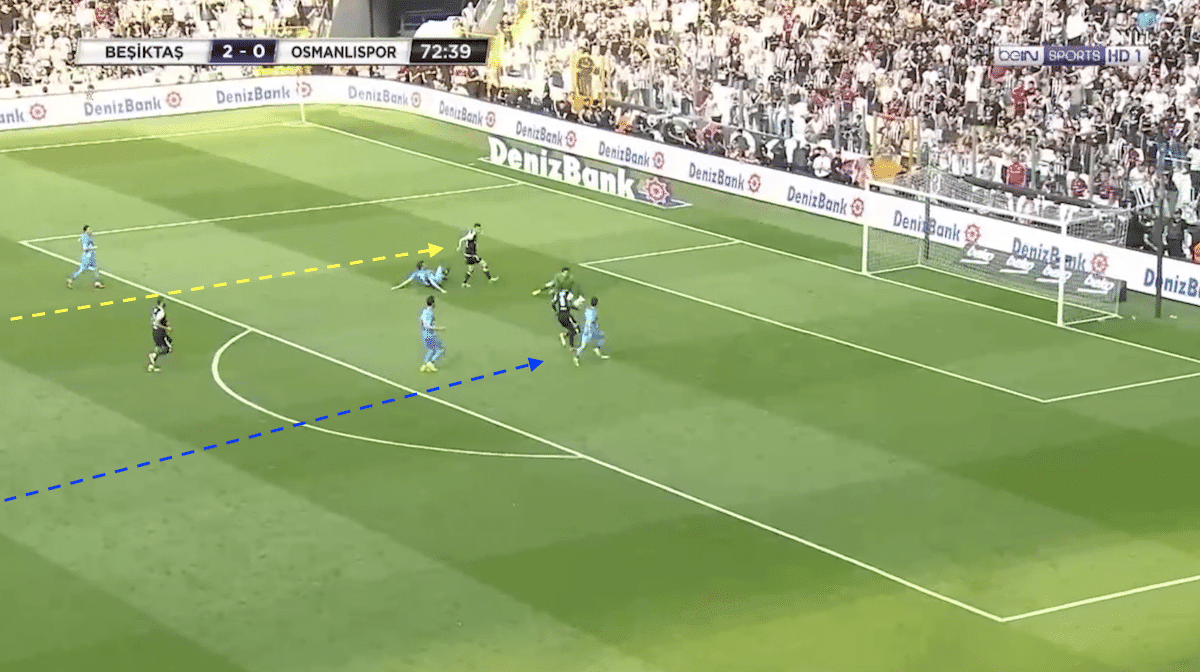 Although he somehow managed to avoid detection to score in the 4-0 rout of Osmanlispor, Aboubakar does get a lot of attention and that creates space and chances for those around him.

Where would Aboubakar fit in at Newcastle?

This season Aboubakar's role at Besiktas has been fluid. He has led the line, often with a partner alongside him, but also playing wide right in a 4-2-3-1 system. Newcastle tended to play with a solitary striker as they won the Championship and going into a higher division that is unlikely to change – particularly with a cautious, pragmatic coach like Benítez at the helm.

After hitting 23 goals in just 26 league starts, Gayle will start the season as Newcastle's first-choice forward and anyone who arrives will have to wait for their chance. The 26-year-old former Crystal Palace hitman has a distinct style, playing on the shoulder and using his blistering pace to run in behind.

There are questions marks against the involvement of 34-year-old Daryl Murphy and the hot-headed Aleksandar Mitrovic who made seven and 11 Championship starts respectively last season. That should ensure whoever does join will be head of the queue to step in for Gayle.

Whoever joins will need to offer a different skill-set to Gayle in order to help pick tougher Premier League locks. With his combination of strength and pace, Aboubakar offers just that.