Sean Longstaff’s ascension at Newcastle has been rapid. Until recently, he had not featured for the club, instead spending time on loan at Kilmarnock and Blackpool. The intention, for Rafa Benítez, was to ease the youngster into first-team contention, to bring him into the starting XI only when he was truly ready.

But Newcastle were left with little choice but to play the 21-year-old when, in January, they were left with a desperate shortage of midfielders. Longstaff had his chance, and he took it.

By March, he had made nine Premier League appearances, impressing in victories over Manchester City, Huddersfield and Burnley. His range of passing, his ability to cover ground in midfield and win the ball back for his side, caught the eye. It is no surprise, then, that he has been linked with a move to Manchester United.

There is an air of calmness, of composure to Longstaff that belies his relative inexperience. He has earned comparisons with Michael Carrick and, though they may be premature, it is easy to see why. There is an elegance about the way he moves with the ball at his feet; he often appears almost nonchalant as he glides past opponents and slides a pass to a teammate.

Longstaff still has plenty to prove, of course. He has not played since early March after suffering a knee ligament injury, so he is yet to reach double figures in Premier League appearances. But his talent is clear. Few players have made such an impact just a few months into their top-flight careers.

“Sean wouldn’t look out of place with England, there are not too many young English players with his quality,” Benítez said of Longstaff in February. “Sean’s humble, professional and focused. He’s a player who can be consistent.

“I saw Sean in training [for Newcastle’s Under-23s] and I saw how good he was technically, he was doing right-foot, left-foot finishes into the bottom corner. His vision is good, there are just a few things he has to improve but he listens to us and is learning quickly. He’s someone who is normally calm under pressure and that’s a good thing for a midfielder.”

Longstaff is a midfielder with all the attributes required to excel at the top level. He is an assured passer of the ball – averaging 31.04 completed passes per 90 minutes in the Premier League this season – and does his defensive duties competently, with an average of 2.22 tackles and 1.31 interceptions per 90.

He is a capable goal scorer, too, as he proved while on loan with League One side Blackpool last season. Longstaff found the net nine times in all competitions with the Seasiders, and that confidence in front of goal has, on occasion, been in evidence for Newcastle. 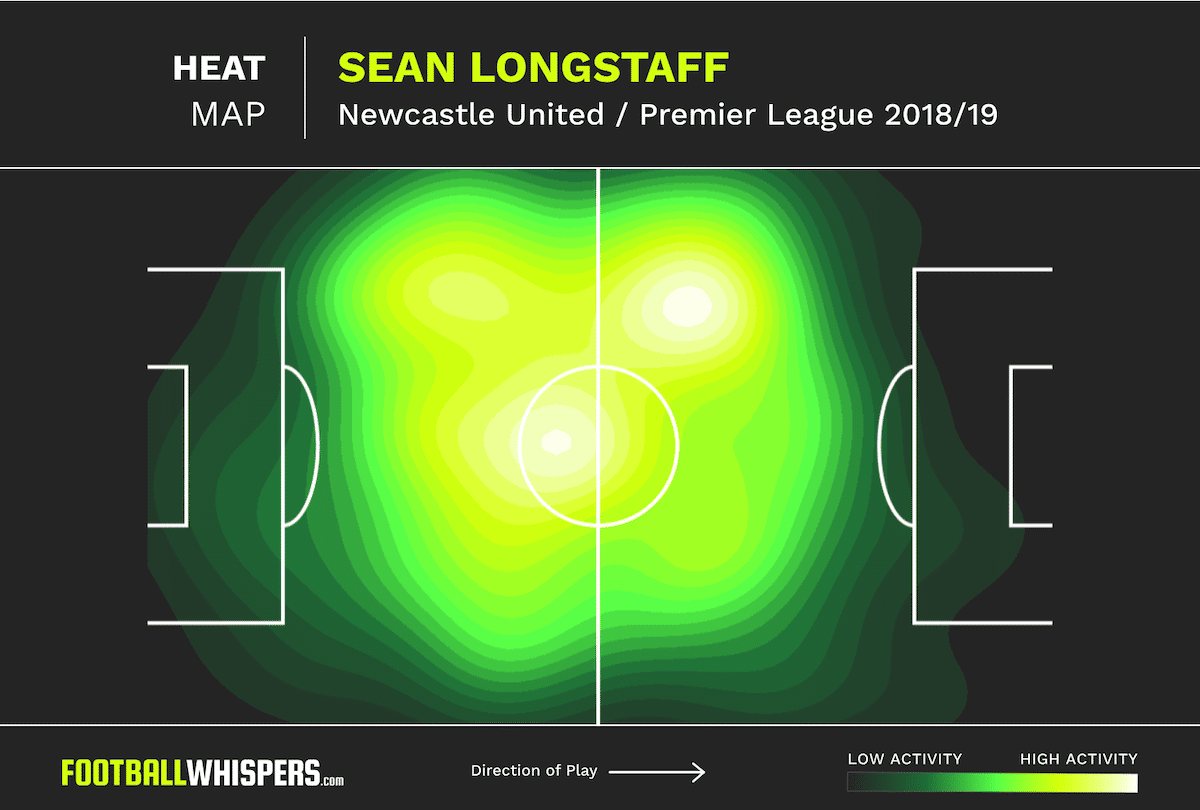 Though he has scored just once for the Magpies – a low drive from close range against Burnley – Longstaff is not afraid to shoot. He has averaged 1.04 attempts on goal per 90 and should be expected to contribute more regularly with a full season of Premier League football under his belt.

“He has a fantastic engine and great fitness levels, but it was his goal return from midfield that was outstanding,” former Blackpool manager Gary Bowyer told Sky Sports earlier this season. “He had this unbelievable knack for shooting and being successful at it, so we encouraged it. He can score from long range. Most of his goals came from distance. He is up against a higher calibre of goalkeeper now but he still has that ability.

“He had a fabulous season and I think that as a result of that there were lots of clubs interested in taking him on loan again this season. You have to say that it has been a shrewd bit of business by Rafa Benítez to keep him in the fold and training with them just waiting for his opportunity. When that opportunity has come along he has just grabbed it.”

Newcastle are, understandably, reluctant to part with Longstaff. He signed a new three-year contract in December and could be handed another deal in the summer to reward him for his performances this season.

It means that United, should they look to sign the youngster, might have to stump up a significant sum of money. Whether they are willing to do that remains to be seen, but Longstaff certainly fits the bill for Ole Gunnar Solskjær, who is looking to bring in home-grown prospects in the upcoming transfer window.

Well that’s the end of the 18/19 season! From achieving my boyhood dreams to having it cut short by injury I’ve enjoyed every second of it! Can’t thank the players, manager and staff enough for their help and support! Now to get back fit and ready to do it again next season ⚫️⚪️ pic.twitter.com/wo7W4CohYT

It would be a significant step up for Longstaff, a player who is still new to the Premier League. There would be higher expectations and more competition for places – he would be battling the likes of Scott McTominay, Nemanja Matić, Paul Pogba and Fred.

Longstaff, though, appears mature beyond his years. He has proven in just two months of regular Premer League football that he has the talent to go on to bigger and better things. For Newcastle fans, the hope will be that he chooses to continue his development at St James’ Park.