Over recent seasons, Lisbon has emerged as the place to shop, with Benfica unearthing and developing a number of talented players. The likes of Ederson, Ramires, David Luiz, Nemanja Matić and Ángel Di María all honed their craft at the Estádio da Luz before moving onto bigger and better things.

Franco Cervi is the latest player to be starring for the Águias who has been linked with a Premier League move.

According to recent reports, the 23-year-old attacker has a host of admirers, with Newcastle United, West Ham United, Brighton & Hove Albion and Swansea City all interested in bringing the Argentine to the English top flight.

The former Rosario Central youngster only joined Benfica in May 2016, putting pen to paper on a six-year contract with a €60million release clause. And though they're famed for being difficult negotiators, the Portuguese club are savvy in the transfer market and know when to strike a deal, meaning they might be open to selling the attacker.

Newcastle are in the market for a left winger, with Chelsea keen not to lose Kenedy on a permanent basis. The Brazilian has had quite the impact since moving to St James' Park in January and replacing him will be at the top of Rafael Benítez's to-do list when the season comes to an end.

West Ham are clearly in the market for another creator if reports are to be believed. James Maddison, Hakim Ziyech and Xherdan Shaqiri have been linked with a move to the London Stadium recently as David Moyes looks to add to his attacking arsenal, and Cervi could work well alongside Manuel Lanzini.

Swansea have yet to replace Gylfi Sigurðsson despite the Iceland international moving to Everton during the 2017 summer transfer window. The Swans may have banked a club-record fee but they lost his creativity, with the signings made unable to match his output.

Brighton have been one of the shrewdest operators in the market since their promotion to the Premier League. While at first glance it might not seem like they need another attacker, recent links to Raphael Dwamena suggest Chris Hughton thinks differently.

Cervi could fill a void for all four clubs. Is he worth the hype though?

What Cervi does well

On the surface, the 23-year-old gives the impression that he's a traditional left winger who likes to attack full-backs on the outside and put crosses into the penalty area. He often picks up possession in wide areas and uses his acceleration to create space down the flank.

But upon closer inspection it becomes clear that, like most South American attackers, there's flair to his game and there's guile to his approach when on the ball. He picks up intelligent spaces and uses this to help him pull the strings.

He's a creative force and there are similarities to Riyad Mahrez in the way he carries himself when drifting into central areas. 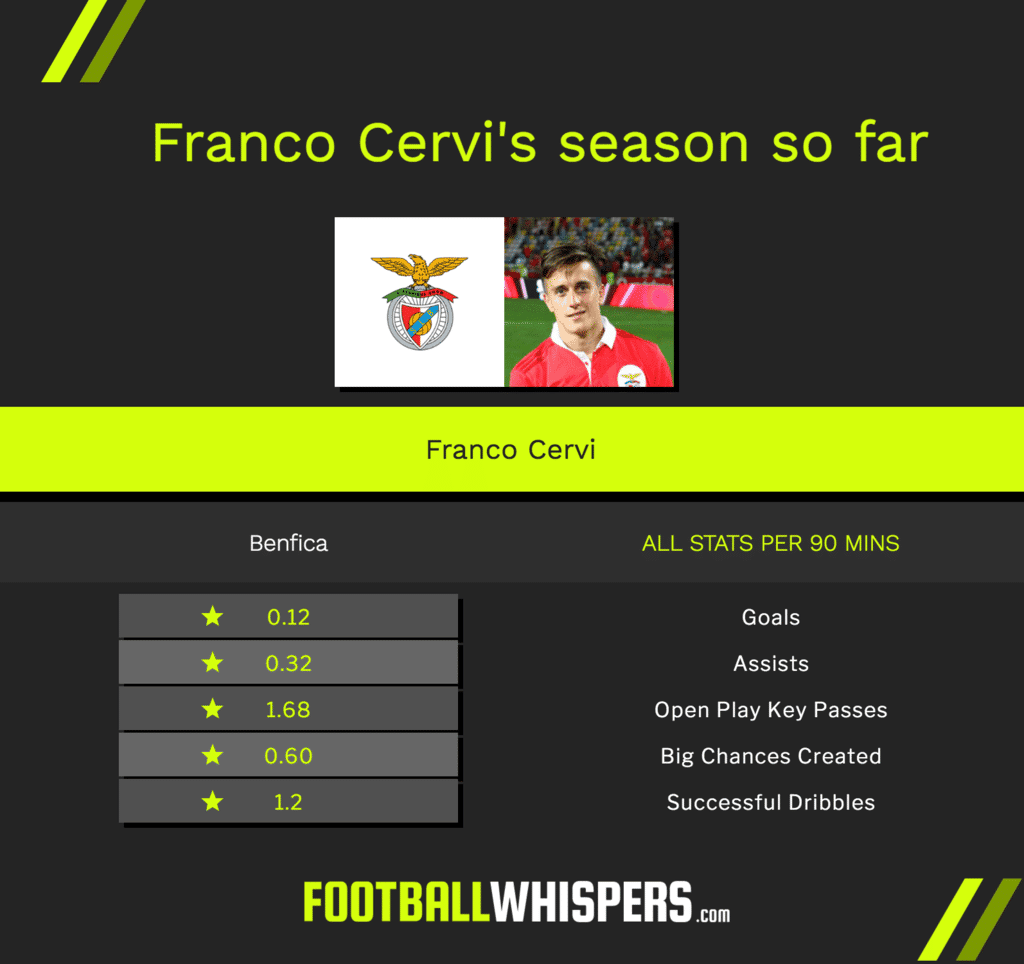 Though he's not a goalscorer, he has still managed 0.12 goals per game this term. As shown in the graphic above, Cervi is a creator. He's ranked first in the Primeira Liga for big chances created per 90 and third for open-play key passes.

He completes 1.2 dribbles, which isn't that impressive in isolation for a wide player but is when viewed as part of the complete attacking midfielder package alongside the other stats listed. It's easy to understand why so many Premier League clubs are queuing up to sign him, especially after watching him play. 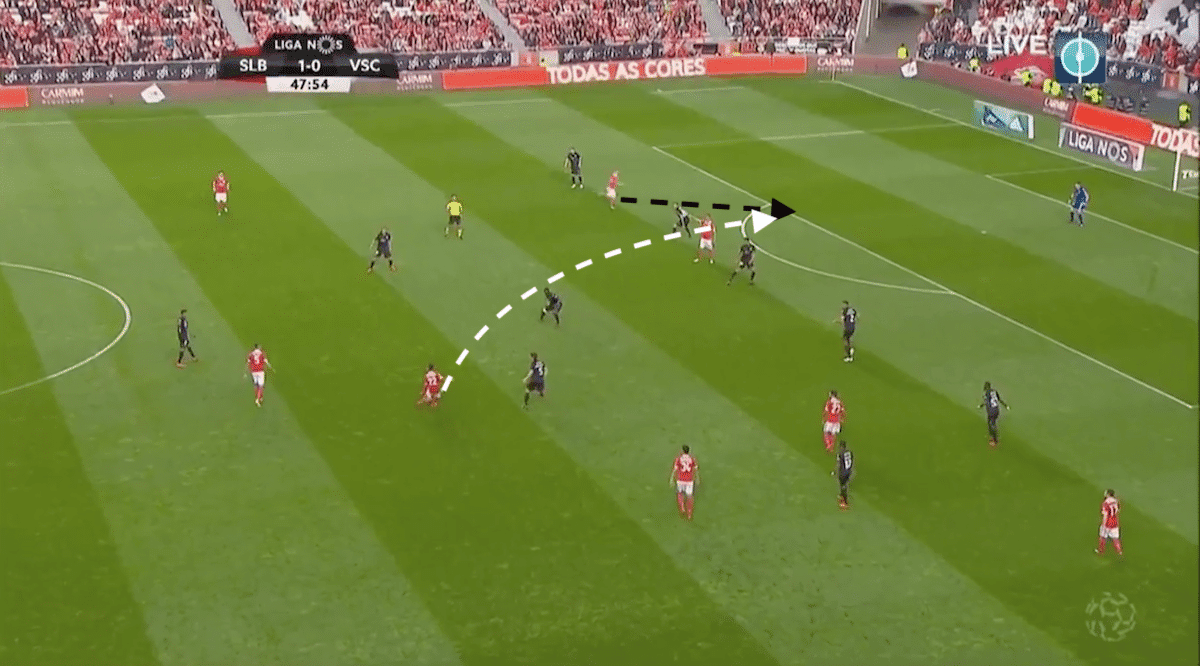 In the screenshot above, Cervi has picked the ball up on the right-hand side of the pitch and drifted into a central area. He's not pressed by the opposition, perhaps because they feel as though they've cut off the passing lanes and are hedging their bets on him overhitting any attempted ball over the top.

Undeterred, he waits for the outside-to-in run before floating the ball between the two defenders and straight into the path of his team-mate. Many can spot this pass but very few can execute it as well as that. Cervi manages to take nine players out of the game with a single pass.

Granted, it's unlikely he'd be afforded so much time on the ball in the Premier League in such a dangerous area, it's good to have to have a player with that ability in his locker. 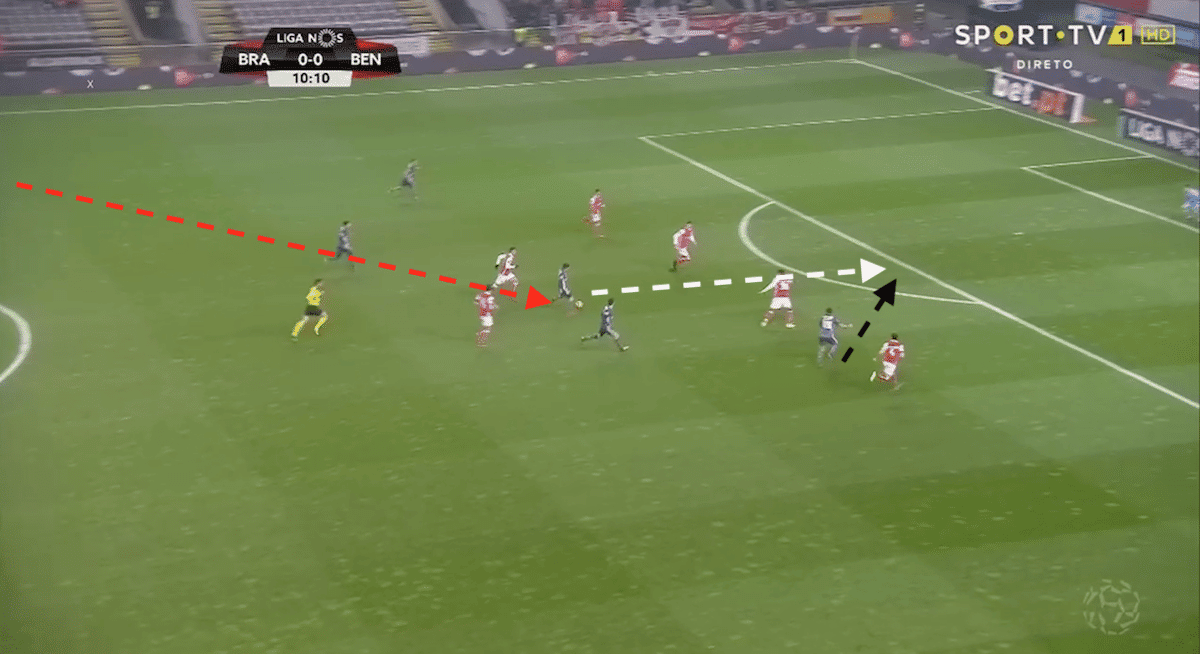 This time around Cervi shows what he can do when pressed. The Argentine attacker picks the ball up on the left side of the pitch and makes his was infield. He shrugs off challenges and attacks the Braga defence who continue to drop back.

Then, without changing his speed or his body shape, he threads the ball through to his team-mate, shown by the black arrow. The home side are caught cold and Benfica are in on goal.

Cervi shares similarities with the likes of of Mahrez, Mesut Özil, Alexis Sánchez and Sadio Mané. All four players have excelled in the Premier League so there's no reason the Benfica man couldn't make an impact. Teams would just need to make him the central hub of their attack. He might come at a cost but, if his performances for Portugal's most successful club are anything to go by, he'd be worth it.